A WaPo writer takes a round-about path to demonstrate the obvious. 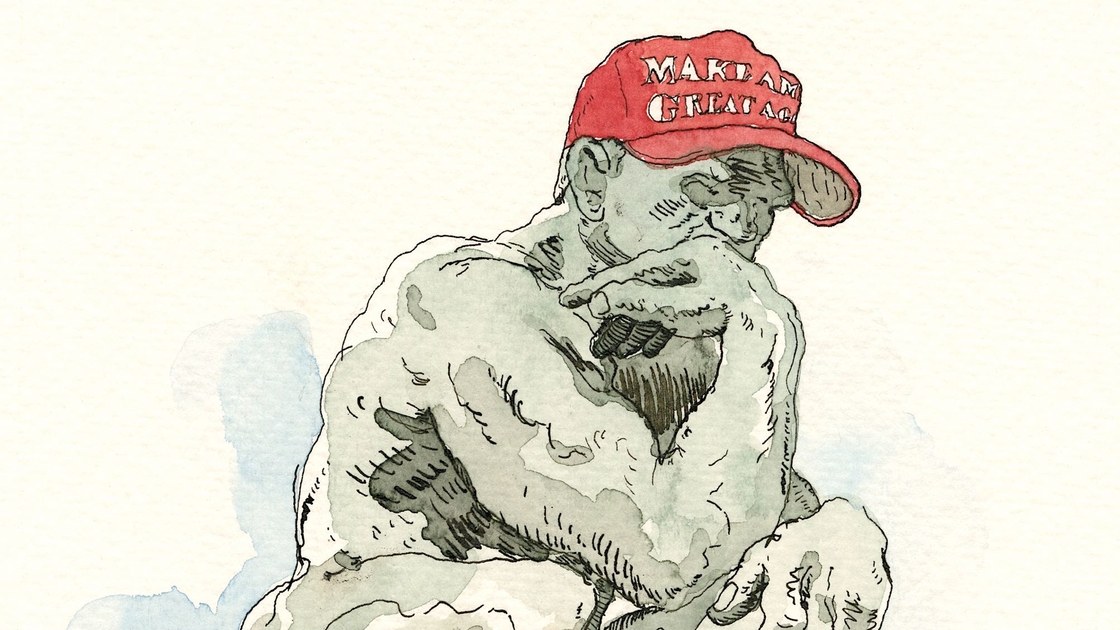 A friend and former colleague recommended that I read Carlos Lozada‘s WaPo essay “Thinking for Trump.” It’s subhed, “Other presidents had a brain trust. But the intellectuals backing this White House are a bust.” is misleading. Even though I agree with its central premise, the framing is simply dishonest:

Presidents are drawn to intellectuals — thinkers who can elevate their impulses, distill coherence from chaos and sometimes write the very history they helped shape.

It is not always a fruitful partnership. John F. Kennedy had wordsmiths and chroniclers in Ted Sorensen and Arthur Schlesinger Jr., as well as the whiz kids who authored Vietnam. George W. Bush met with historians, philosophers and theologians during dark times in his presidency, when the fiasco of Iraq weighed heavy. Ronald Reagan leaned on the governing plans of the Heritage Foundation, while Bill Clinton combined endless policy salons with the centrist blueprints of the Democratic Leadership Council. Barack Obama had, well, himself. And recall how Jimmy Carter took inspiration from the writings of Christopher Lasch for his ill-fated “malaise” speech in 1979. Yes, surrounding yourself with the brightest does not always prove best.

Being a Trump intellectual is an entirely different task. Donald Trump won the White House campaigning against established expertise. He doesn’t like to read beyond a page or so. His brain trust is more “Fox & Friends” than American Enterprise Institute, his influences more Bannon than Buckley.

The dig at Obama is bizarre and unfair. While it may be true that he relied a bit too much on his own counsel and junior sycophants known more for their loyalty than their experience or expertise, there were plenty of legitimate intellectuals aboard Team Obama from the earliest days of the campaign through both terms.

The initial assessment of Trump’s relationship with expertise is spot-on. But I nonetheless find the frame dishonest because the rest of the piece is essentially a bait-and-switch. Rather than a look at the core intellectuals on Team Trump—Seb Gorka comes to mind—or make the very defensible case that Trump simply ignores experts, period, the Intro is a setup for a book review essay for three books that have very little to do with one another—one of which isn’t legitimately even a book.

In September 2016, Michael Anton, a former aide in the George W. Bush White House, published “The Flight 93 Election,” a pseudonymous essay that previewed this adversarial fixation in melodramatic terms. Voting for Trump, he wrote in the Claremont Review of Books, was like charging the cockpit of a hijacked plane on Sept. 11, 2001. You might die, but if you do nothing, death is certain. A Hillary Clinton presidency would constitute an extinction-level event for American freedom and true conservatism; it would be “pedal-to-the-metal on the entire progressive-Left agenda.” Or, as Anton put it in an excess of metaphor, “Russian Roulette with a semi-auto.”

The essay drew criticism for its imagery, anonymity and hostility toward conventional conservatives as well as immigrants — Anton decried America’s “ceaseless importation of Third World foreigners” — thus making the writer a perfect candidate for a job in the Trump White House. Anton, whose identity was revealed by the late Weekly Standard, served for 14 months as a National Security Council official. Then-White House chief strategist Stephen Bannon dubbed him “one of the most significant intellects in this nationalist movement.” So with his new book, “After the Flight 93 Election,” Anton would seem well-positioned to move beyond the election and argue a more concrete case for the president, drawing on the administration’s first two years and on the author’s experience in the Trump White House.

Except Anton doesn’t even try; the “After” of his title is an afterthought. Instead, he reprints his original essay, plus a follow-up “restatement” that was posted a week later, arguing that Trump constituted “the first serious national-political defense of the Constitution in a generation” and that concerns over despotism were pointless because the candidate was more “buffoon” than tyrant. Also, Hillary was still way worse.

The book’s only new material is the preface and a lengthy rumination (titled “Pre-Statement on Flight 93”) that purports to explain “the essences of conservatism, Americanism, and Western civilization, and to review the main threats to their survival.” The system of federalism, separation of powers and limited government bequeathed to us by the founders is under siege, Anton writes, and the barbarians rattling the gate are the latest iteration of early-20th-century progressives and 1960s radicals, justifying an ever-expanding administrative state with social-justice mantras of personal identity. “The post-1960s Left co-opts the language of ‘justice’ and ‘rights’ as a rhetorical device to get what it wants: the transfer of power, honor, and wealth between groups as retribution for past offenses.” The result, Anton contends, is crime, family dissolution, weak foreign policy, limitless government and restricted speech.

A 96-page vanity press compilation of a magazine essay and an epilogue isn’t a “book” in any meaningful sense. But at least it landed Anton a job as part of Trump’s National Security Council, if only on its communications staff. I guess that counts, since it’s the role Ben Rhodes ostensibly had for Obama. Then again, Rhodes was at least a key influencer in the administration. There’s no much evidence Anton was. While his brand of white nationalism certainly overlaps considerably with Trump’s longstanding messaging, it seems fortuitous rather than causal.

The other two examples are, likewise, seemingly cases of people glomming on to the Trump bandwagon.

In “The Case for Trump,” historian Victor Davis Hanson also treats 2016 as a reaction by voters tired of progressive orthodoxy, globalization and left-wing identity politics. “Trump did not create these divides,” Hanson writes. “He simply found existing sectarianism politically useful.” Trump’s insults, vile language and incessant denigration of opponents are just part of his “uncouth authenticity,” which appeals to supporters and enrages the rest. From the start of his campaign, Trump displayed “an uncanny ability to troll and create hysteria among his media and political critics,” Hanson marvels. “In their anti-Trump rage, they revealed their own character flaws.”

Hanson relishes those flaws, and, despite the title, his book focuses less on the case for Trump than on the case against everyone else. Hillary Clinton’s infamous “basket of deplorables” line typified the “toxic venom” with which liberals regard the nation’s interior, he writes, while Clinton’s past misdeeds, real or alleged, provided “scandal vaccination” for Trump’s bankruptcies, sexual misconduct and endless lawsuits. Clinton’s problem, Hanson explains, was threefold: She lied so much that her various deceptions could not be reconciled; she never learned from her past scandals; and she thought herself exempt from accountability.

The fact that this trifecta nicely describes Trump’s behavior while in office does not seem to occur to Hanson. He’d rather indulge in casual sexism, criticizing Clinton’s “shrill” voice and her “signature off-putting laugh,” and inexplicably suggesting that while “Trump’s bulk fueled a monstrous energy; Hillary’s girth sapped her strength.”

Hanson, a senior fellow with Stanford University’s Hoover Institution, assails the “deep state,” even while acknowledging that Trump’s use of the term is so vague as to be meaningless. He praises the “inspired” and “impressive” Cabinet members Trump has assembled, largely forgetting their high-profile scandals, conflicts of interest, obeisance and resignations. “The Case for Trump” is notable for such omissions.

Hanson is an odd case. He’s an accomplished scholar with a PhD in classics from Stanford, an emeritus professor from Cal State, and winner of multiple professional awards who has long held a post at the Hoover Institution. He’s also a long-time conservative columnist for National Review and other mainstream publications. And, as is often the case for those who move from academia to punditry, Hanson has long since strayed from his areas of actual expertise into becoming a generalist and panderer to his readership.

Regardless, Hanson is even less a “Trump intellectual” in the sense that others in the opening paragraphs were for their Presidents than Anton. He’s just a dude who tried to cash in by writing a book legitimating Trump.

Finally, we get this:

Stephen Moore and Arthur Laffer disagree with some of Trump’s hard-line positions on immigration and worry about his trade protectionism. “To say the least, Donald Trump is a work in progress on trade,” they admit. “He is playing a high-stakes game of poker here with a big upside. But if it doesn’t work, the ramifications scare us to death.”

So why did the veteran conservative economists sign on as advisers for Trump’s 2016 campaign, and why did they write a book — titled “Trumponomics” and published late last year — enthusiastically defending the economic policies and instincts of a leader who thinks trade wars are good and easy to win? The answer is simple: “We liked his tax plan.”

Forget single-issue voters; Moore and Laffer are single-issue thinkers. Cutting taxes is the siren that lured them to Trump, and for which they appear willing to make any substantive or intellectual sacrifices. The authors recount their role in helping shape the 2017 tax bill — they’re especially proud of their op-eds, which they quote extensively in the book, along with praise thereof — and reiterate their belief that tax cuts and deregulation will unleash so much economic activity that hard choices melt away. “We have always believed that the shrewdest way to make entitlement programs solvent is to restore rapid growth,” they write. And they swoon over Trump’s “unyielding optimism” about the nation’s economic potential, even when he embraces growth projections that the two economists consider unrealistic.

So, here we have an actual example of people who consulted on policy with Trump, although the directionality is again unclear. That is: “We liked his tax plan” is different than “We wrote his tax plan” or “Our writings strongly influenced his tax plan.” They’re more “intellectuals who whored themselves out in Trump’s service” than “Trump intellectuals” in the sense suggested by the opener.

Ultimately, the opener and the book review essay sandwiched in between are weaved together with two measly paragraphs:

Presidents and intellectuals are always an awkward love affair, especially so when one side seems desperate and the other indifferent. Trump has seemed more concerned about retaining the affections of conservative media figures such as Fox News host Sean Hannity or commentator Ann Coulter, whose 2015 book “Adios, America” likely inspired his attack on Mexican immigrants in the speech announcing his presidential bid. Yet, for all their declared high principle, Trump’s intellectuals have tied themselves to the whims and feuds of their leader, captive minds to that indefinable mix of ideology, impulse and invective known as Trumpism.

Hanson, to his credit, attempts to define it in broad terms. Trumpism, he concludes, “was the idea that there were no longer taboo subjects. Everything was open for negotiation; nothing was sacred.” A useful interpretation, but a partial one. Even if nothing is sacred, must everything be profane?

Further, because so many conservative intellectuals, particularly those in the defense and national security space, declared early on that they could not support Trump because he would be dangerous to the nation’s security, Trump was left with recently-retired military officers and low-caliber folks who wouldn’t have been key decision-makers in a normal Republican Presidency to staff his team. But, since he doesn’t seem to actually take the advice of his advisors most of the time, it’s not obvious how much that matters.