The polls are looking worse and worse for Donald Trump.

On March 11, 45% of Americans approved of the job Donald Trump was doing in Gallup’s daily tracking poll. It’s been all downhill since then.

In the intervening 86 days, Trump’s job approval has never again reached 45% in Gallup’s data. In fact, the last time Trump was even at 43% was on April 28.

He’s spent most of the time between then and now mired in the low 40s and high 30s.

And now, Trump finds himself in the midst of his worst extended poll run of his presidency. Starting on May 28 when Gallup put his job approval at 42%, Trump has been sliding downward. The latest Gallup track on June 3 put Trump’s job approval at a dismal 36% — a single percentage point away from the lowest ebb of his time in the White House. (On March 28, Trump’s job approval was at 35%.)

Where Trump’s numbers do stand out is compared to his presidential predecessors. President Obama was at 61% in the Gallup tracking poll in early June 2009. George W. Bush was at 55% in Gallup at this time in 2001. The only modern president who comes close to Trump’s poor poll standing is Bill Clinton, who was at 37% approval in early June 1993. (Clinton’s numbers had tanked in the wake of his firing of seven employees in the White House travel office in mid-May, a controversy that came to be known as “Travel-gate.”)

Trump’s poll numbers — if they stay anywhere near as low as they currently are — could have a hugely negative impact on his party’s chances in the 2018 midterms elections. Since 1946, according to Gallup, when a president’s job approval rating is above 50%, the average number of seats his party loses in a midterm election is 14. When a president’s job approval rating is below 50%? Try an average 36-seat loss.

If history holds, Democrats would likely take back control of the House in 2018 — given that they only need a 24-seat gain to do so. (One factor working against Democrats: The House is pretty well sorted out on partisan lines. Only 23 House Republicans currently represent districts Hillary Clinton carried last November.)

If you look beyond the three individual polls that Cillizza cites to the polling averages, things don’t look much better. In the RealClearPolitics polling average, for example, Trump stands at 39.6% approve and 54.6% disapprove. This puts his job approval at the lowest points it has been since the beginning of the Administration and the disapproval number near the highest point it has been at since that time. In the Pollster average, Trump is at 41.7% approval and 54.4% disapproval, These numbers are also near the lowest and highest points they have been at since Inauguration Day. Breaking those Pollster numbers down by party affiliation, Trump’s job approval remains almost universally in the negative among Democrats and almost universally in the positive among Republicans. Among independents, meanwhile, only 35.2% of self-identified Independents approve of the job the President is doing, while 55.2% disapprove. This is the worst showing that we’ve seen for the President among political Independents since the Administration began. Additionally, the President’s personal favorability average as tracked by RealClearPolitics appears to be returning to pre-election levels, with 40.2% of respondents across the polls that track this number saying that they have a favorable view of Trump and 54,4% percent saying they have an unfavorable view.  In Pollster’s average, those numbers are at 40.5% favorable and 53.1% unfavorable. While neither of these numbers is at the place they were prior to Election Day, they are both trending in the wrong direction for Trump and seem to be bound to head for those numbers, if not worse. Finally, as we can see from the RCP Job Approval chart, the gap between Trump’s negative and positive numbers, which has been wide since the Administration began, is widening: 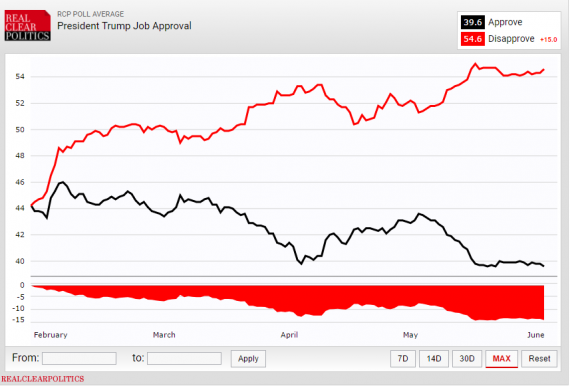 Before Democrats start celebrating, though, there are several caveats to keep in mind.

First of all, it is still very, very early in the midterm election early and far too early to start making projections about something such as who may control the Senate or House after Election Day 2018. As things stand, we are seventeen months away from the midterms and there’s no telling what may happen that could impact the battle for control of  Congress. Given that, while looking at the Generic Ballot is a useful tool in determining where the public mind is right now, it’s worth remembering that this number has wildly fluctuated prior to elections in the past and will likely to so in the future. Additionally, the correlation between the Generic Ballot and the actual outcome of elections isn’t exactly perfect. It’s possible that the national polls will continue showing the Democrats being modestly more favored over Republicans as it does now, but that Republicans will still control Congress in the end.

Secondly, it’s worth noting that the Generic Congressional Ballot remains fairly close notwithstanding the widening gap in Trump’s job approval numbers, an indication that perhaps Democrats won’t benefit from anti-Trump sentiment as much as they might hope. If Democrats are going to take control of the House or the Senate, then we should expect that the gap between the parties will be larger than just six or seven points. Also, the fact that the numbers are so close eve in the face of the President’s overwhelmingly bad poll numbers may be an indication that the public isn’t inclined to punish the GOP as a whole for the President’s failings.

Finally, it’s worth noting that the battle for control of Congress isn’t really the national race that the Generic Ballot makes it out to be. Instead, it boils down to what’s happening at the District level for the House and the state level for the Senate, and from that perspective, the Republican position doesn’t seem quite so precarious. Notwithstanding the unpopularity of the President, for example, there are many reasons to believe that nearly all of the Republican incumbent up for re-election will win and that the vacant seats held by Republicans who will not stand for re-election to stay in GOP hands. At the Senate level, the current math suggests that nearly all of the small handful of Republican seats up for re-election will stay in the GOP column, with only Dean Heller in Nevada being considered realistically vulnerable right now. At the same time, there are at least a half-dozen Democrats up for re-election in states that are traditionally red. Democrats would need a net gain of at least three seats to take 51-49 control of the Senate, and even now that seems like an uphill battle. Yes, it’s possible that Trump will be so unpopular by November 2018 that we’ll see a Democratic wave, but it’s far too early to forecast that.

Even with all those caveats, Trump’s historically low poll numbers pose problems for the Administration and for Republicans on Capitol Hill. The worse these numbers get, the harder it will become for the President to get his agenda through Congress and the less influence he will have over waivering Republicans in the House or Senate on controversial issues such as health care. Additionally, these negative job approval numbers, if they are sustained, suggest that the President’s ability to get the public outside of his base to support him will become more and more difficult and that there will be more doubts about his ability to lead in a crisis. It’s possible, of course, that these numbers will change and that the public will come to view Trump more positively than negatively. If the past 136 days are any indication, though, that doesn’t seem very likely, and that suggests that Donald Trump will not have a very successful Presidency. If that happens, it will basically be his own fault.