Seven years after deactivation, the U.S. Second Fleet will be patrolling the North Atlantic again. 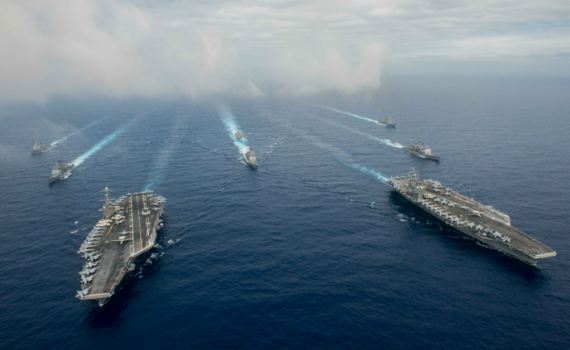 Six years after disbanding it in 2011 in what was arguably a recognition of the assumption at the time that the Pacific and Far East would figure far more significantly in America’s security needs in the future, the United States Navy is bringing back the Atlantic Fleet:

The U.S. Navy has reactivated a fleet responsible for overseeing the East Coast and North Atlantic — an escalation of the Pentagon’s focus on a resurgent Russia and its expanding military presence.

“This is a dynamic response to the dynamic security environment,” Richardson said onboard the carrier George H.W. Bush. “So as we’ve seen this great-power competition emerge, the Atlantic Ocean is as dynamic a theater as any and particular the North Atlantic, so as we consider high-end naval warfare, fighting in the Atlantic, that will be the 2nd Fleet’s responsibility.”

In a separate statement, Richardson invoked Defense Secretary Jim Mattis’s national-defense strategy as key guidance to reestablish the fleet, which will extend halfway across the Atlantic until it meets the area of responsibility for the Italy-based 6th Fleet.

Mattis’s framework, released in January, said “long-term strategic competitions” with Russia and China are the top Defense Department priorities as the Pentagon seeks to pivot away from counterinsurgencies that have consumed funding and exhausted resources since Sept. 11, 2001.

Defense officials and analysts have said those operations took attention away from modernizing the military, allowing Russia and China to close the technological gap with newer and deadlier weaponry.

In that time, Russia has occupied Crimea and Ukraine and provoked a host of hostilities against the West, including cyberattacks and interference in elections in Europe and the United States. That also includes an uptick of Russian submarines prowling for undersea telecommunications cables used by NATO.

The reactivation of the 2nd Fleet signals the Navy’s desire to “operate more powerfully and credibly in the North Atlantic,” Bryan McGrath, a former destroyer commander and deputy director of the Center of American Seapower at the Hudson Institute, said Saturday.

One concern the 2nd Fleet will immediately address: the threat from a now-modest number of Russian nuclear attack submarines capable of cruising in the depths off the East Coast, McGrath told The Washington Post.

Submarines like the nuclear-powered K-329 Severodvinsk are equipped with hypersonic anti-ship missiles and nuclear-capable missiles that can reach any city on the Eastern Seaboard within range, he said.

Russian submarines can also create a hazard of mines and anti-submarine missiles that would complicate a deployment in support of NATO allies, risking an escalation of tension with U.S. cities in range, he said.

The move also arrives alongside broader NATO strategies to counter Russia. In a separate announcement Friday, the Pentagon said it proposed a NATO Joint Force Command for the Atlantic in Norfolk.

“To quote Ned Stark: ‘Winter is coming,'” McGrath said, referring to a “Game of Thrones” character who warns of approaching conflict. “There is a general sense a revisionist power in Russia is dedicated to opposing the U.S. in many arenas, and military opposition is increasingly one of them.”

This move appears to be the latest recognition on the part of the United States that the period of peace that we saw between the United States and Russia in the wake of the collapse of the Soviet Union is effectively over. For better or worse, Russia under Vladimir Putin, while far from being the military threat that it was during the height of the Cold War, has decided that taking a more aggressive stance toward the West is in its interests at this time. We saw that in the wake of the Sochi Olympics when Russia effectively staged a coup in Crimea and seized that peninsula from Ukraine, to whom it had been transferred in the 1950s and then followed that up by funding, arming, and training guerrilla forces in eastern Ukraine that are sympathetic to Russia and to the pro-Russian governing that was ousted in 2014. In addition to those actions, Russia has also expanded its military support for the Assad government in Syria and resumed threatening flight activities by fighters and bombers that mirror those that were a regular occurrence during the Cold War. In the light of all of this, the decision to reactivate the fleet primarily responsible for security in the North Atlantic would seem to make sense from both a strategic and a symbolic point of view. Strategically, the move helps to protect the sea lanes in the North Atlantic, where Russian submarine activity has been on the upswing in recent years, which would be crucial to any efforts to resupply forces in Europe should the need arise. Symbolically, it sends a signal to Russia that the West isn’t going to be intimidated by their more aggressive stance even if one assumes that it’s all more for show than a realistic threat that the Russians could carry out.

The announcement is also significant for what it says about NATO and the current state of America’s longest-standing, and most important, international alliance. For much of the President’s first year in office, there were significant doubts about just how committed President Trump was to NATO and its principle of mutual defense. It was also apparent that he either doesn’t understand how NATO works, or that he was deliberately misrepresenting it when he made comments about other NATO members ‘not paying their dues’ to NATO. In reality, of course, the members of NATO don’t pay dues as part of their obligation to the organization. Rather, there has been a long-standing agreement that members would devote at least 2% of their Gross Domestic Product to their defense budget. This would still mean, of course, that the nations such as the United States, the United Kingdom, France, and Germany, would end up spending far more on defense than smaller nations such as Belgium, The Netherlands, or the former Warsaw Pact nations in Eastern Europe. However, the target was seen as a sign that each nation would be committed in some sense to contributing to the collective defense ethos of the organization. In trips to Europe in his first year, Trump was vague about just how committed he was to NATO’s collective defense ethos, but this decision arguably answers that question to some degree and demonstrates that, at least when it comes to national defense, Trump is listening to his Secretary of Defense and his Generals rather than following his own misguided ideas.