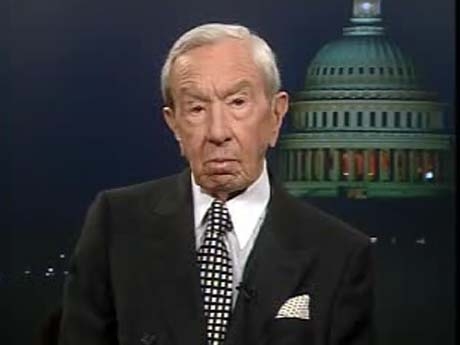 Warren M. Christopher, secretary of state in President Clinton’s first term and the chief negotiator for the 1981 release of American hostages in Iran, died Friday night in Los Angeles. He was 85 and had been ill with kidney and bladder cancer.

The Associated Press reported that a spokeswoman for O’Melveny & Myers, the law firm where Mr. Christopher was a senior partner, confirmed his death.

Methodical and self-effacing, Mr. Christopher alternated for nearly five decades between top echelons of both the federal government and legal and political life in California. Among other things, he served as administration point man with Congress in winning ratification of Panama Canal treaties, presided over normalization of diplomatic relations with China and conducted repeated negotiations involving the Middle East and the Balkans.

At home, Mr. Christopher developed a reputation as a riot expert, investigating racial unrest in Detroit and in the Watts district of Los Angeles and later heading a 1991 commission that proposed major reforms of the Los Angeles Police Department following riots prompted by the beating of a black motorist, Rodney King.

As a political operative, he headed Mr. Clinton’s 1992 search committee for a vice presidential running mate, settling on Albert Gore, and subsequently directed the transition team of the president-elect, acting as an establishment counterweight on a team dominated by Arkansans new to the national scene. Eight years later, he directed for Mr. Gore, running for president, the search resulting in the selection of Senator Joseph I. Lieberman for the second spot on the Democratic ticket.

When the election stalemated, Mr. Christopher supervised the recount of disputed votes in Florida before George W. Bush emerged the winner by decision of the Supreme Court.

Warren M. Christopher, a Democratic Party mandarin who led the State Department during President Bill Clinton’s first term and found himself confronted by an array of foreign policy crises, most profoundly the ethnic slaughter in the Balkans and Rwanda, died Friday night in Los Angeles of complications from kidney and bladder cancer, the Associated Press reported. He was 85.

Spokeswoman Sonja Steptoe from the O’Melveny & Myers law firm, where Mr. Christopher was a senior partner, told the AP that he died at his home. Reuters news agency quoted a family statement saying Mr. Christopher “passed away peacefully, surrounded by family.”

When in 1993 Mr. Christopher became the 63rd U.S. secretary of state, he was already known to the public as an effective, if circumspect, negotiator who played a crucial role in brokering the release of the U.S. hostages in Tehran on the day Jimmy Carter yielded the presidency to Ronald Reagan.

Earlier he had been the Carter administration’s point man in persuading the Senate to ratify the Panama Canal treaties, which eventually ceded U.S. control of the canal to Panama. He gained the support of crucial senators as the architect of a “reservation” giving the United States the right to protect the canal and then managed to persuade the Panamanians to accept the provision.

When he was named Clinton’s secretary of state, Mr. Christopher was considered the veteran hand who would complement the former Arkansas governor’s limited foreign policy experience.

Mr. Christopher’s primary responsibility was to ensure that crises in foreign policy did not undermine or interfere with the president’s domestic agenda. This was the first time in more than a half century, Clinton would later say, that the United States was “without a single, overriding threat to our security,” and it left the new secretary without an obvious blueprint for his new job.

As a diplomat, Mr. Christopher projected an image of discretion and unflappability. His attire was elegant. People magazine included him in a feature on the best-dressed men in America. Dressing well, he said, “is a mark of the respect you have for others.” His language was reasoned but often noncommittal. His stock answer to questions about his personal success was “I’ve been very lucky.”

Writers and commentators characterized him as dour, attentive to detail, patient, steady and poised, but rarely, if ever, charismatic. Clinton once joked that Mr. Christopher was “the only man ever to eat presidential M&Ms with a knife and fork.” No one was surprised when, on an official stopover in Ireland, he ordered Irish coffee, decaffeinated and without alcohol.

In a normally high-profile office, Mr. Christopher shunned publicity, and he disliked being in the spotlight. It was on his watch as secretary that peace accords were reached in 1995 in Dayton, Ohio, ending a three-year war and ethnic slaughter in Bosnia, but much of the news media attention was focused on Assistant Secretary of State Richard C. Holbrooke, who had handled the nitty-gritty of the negotiating. Mr. Christopher later described the agreement as “one of the greatest achievements in American diplomatic history.”

Warren M. Christopher, a key figure in peace efforts in Bosnia and the Mideast as secretary of state in the Clinton administration, has died, a spokeswoman for his law firm said Saturday. He was 85.

Christopher died at his home in Los Angeles late Friday of complications from bladder and kidney cancer, said Sonja Steptoe of the law firm O’Melveny & Myers, where Christopher was a senior partner.

A loyal Democrat and meticulous lawyer, Christopher also supervised the contested Florida recount for Al Gore in the 2000 presidential election. The Supreme Court, on a 5-4 vote, decided for George W. Bush.

As he prepared to step down in 1996 as secretary “for someone else to pick up the baton,” he said in an interview he was pleased to have played a role in making the United States safer.

His proudest accomplishments, he told The Associated Press, included a role in promoting a ban on nuclear weapons tests and extension of curbs on proliferation of weapons technology. He also tried to promote peace in the Middle East, tirelessly traveling to the region. Christopher made some two dozen trips to Syria alone in a futile effort to promote a settlement with Israel.

He was more successful in the negotiations that produced a settlement in 1995 for Bosnia, ending a war among Muslims, Serbs and Croats that claimed 260,000 lives and drove another 1.8 million people from their homes.

Former U.S. Secretary of State Warren Christopher, who helped bring peace to Bosnia and as an L.A. attorney led a review of the LAPD after the Rodney King beating, died in Los Angeles at age 85, news media reported.

Christopher “passed away peacefully, surrounded by family at his home in Los Angeles” of complications from kidney and bladder cancer, KABC-TV quoted his family as saying in a statement late on Friday.

As chairman of the Christopher Commission, formed in 1991 after the release of the Rodney King beating tape, Christopher pushed for key reforms of the department, including putting cameras in patrol cars.

As the top U.S. statesman under President Bill Clinton from 1993 to 1997, Christopher was a behind-the-scenes negotiator. Often called the “stealth” secretary of state, he was known for his understated, self-effacing manner.

“Careful listening may be the secret weapon,” the New York Times quoted him as saying in a 1981 speech when he was deputy secretary of state. “I observed some time ago that I was better at listening than at talking.”

In 1995, he intervened during the crucial final days of the U.S.-brokered Bosnian peace talks at Dayton, Ohio. He had an important role in closing the deal, according to his then deputy, Richard Holbrooke, the force behind the agreement.

Christopher not only spoke the language of diplomacy, he dressed the part. Favoring elegant, tailored suits, he was once named one of the best dressed men in America by People magazine for his “diplomatically dapper” style.

As secretary of state, Christopher devoted much of his time to the Middle East. He made at least 18 trips to the region in pursuit of peace and a ceasefire in southern Lebanon between Israel and the pro-Iranian Islamic group Hezbollah.

In 1994, he witnessed the signing of a peace treaty between Jordan and Israel.

As President Jimmy Carter’s deputy secretary of state, he negotiated the release of 52 Americans taken hostage at the U.S. Embassy in Tehran in 1979. The hostages were freed on Jan. 20, 1981, minutes after Ronald Reagan was sworn in to succeed Carter.

Christopher received the Medal of Freedom, the nation’s highest civilian honor, for his efforts.