The Democrats have a big advantage in the Electoral College, at least for now. 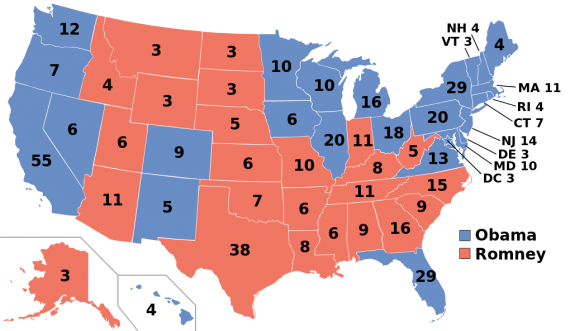 The Monkey Cage’s Ben Highton sees the Democratic Party with a big Electoral College advantage going into the 2016 election:

If the 2016 presidential vote is evenly split between the parties, which one is more likely to win the Electoral College and therefore the presidency?  I estimate that the Democrats’ chances of winning the Electoral College vote are between 83 and 89 percent, giving them a significant advantage.  This argument contrasts with those who are skeptical of a Democratic advantage, such as Jonathan Bernstein and Harry Enten.  The reason I predict such a significant advantage is because of ongoing, long-term trends altering the electoral outlook in a number of key swing states.

To make predictions for 2016, I analyzed how the popular vote margin (the Democratic minus the Republican percentage of the vote) compared to the national vote in every state from 1992 through 2012.  I examined the states individually to detect any long-term trends.  For example, while Oklahoma was already significantly more Republican than the nation in 1992, it steadily became even more Republican over time.

The key to the predictions for 2016 is taking these long-term trends into account.  There is also uncertainty to factor in.  There is uncertainty about the trajectories of the states.  And, even if states were not changing, there would be uncertainty in predicting state outcomes due to idiosyncratic factors that cannot be anticipated in advance.  Both types of uncertainty can be estimated and taken into account when predicting state popular vote shares and the eventual distribution of Electoral College votes.  (I follow the approach developed by Andrew Gelman and Gary King in this article.)

[T]he key to the Democratic advantage are the trends underway in some key states.  While Oklahoma has moved significantly in the Republican direction, it was already strongly Republican.  But, consider the 10 states whose 2012 presidential margin was within five points of the national margin.  In five of them (Florida, Iowa, Minnesota, Ohio and Pennsylvania) the trends are modest in size and hard to separate from random noise.  In Colorado, a more significant trend in the Democrats’ favor appears underway, but it has been uneven, which makes predictions for Colorado in 2016 more uncertain.  In the remaining four states (Nevada, New Hampshire, Virginia and Wisconsin), the trends are clearer, more substantial, and all favor the Democrats.

You can read more about Highton’s methodology and conclusions at the link, but his conclusions seem to match up with what we’ve actually seen in the real world. Of the ten states with the most electoral votes, for example Democrats have won seven of them in each of the last two Presidential elections, and eight of them in at least one of the last two elections. Those seven states add up to 187 Electoral Votes, less than 90 votes short of the 270 needed to win an election. Add in the eighth state, North Carolina, and the number rises to 202. Of the next ten, Democrats have won six of those states, amounting to another 70 Electoral votes, in the last two elections and most of them in every election going back to 1992. That puts a potential Democratic nominee at just under 260 Electoral Votes, and likely hands them the election.

Republicans, on the other hand, face a far more difficult task. In order to win the Presidency in 2016, a Republican candidate would need to hold on to every state won in 2012, including states such as North Carolina where the margin of victory was fairly close, as well as winning back Ohio, Virginia, and Florida. Even then, though, the GOP would still fall short of victory at 268 Electoral Votes unless they managed to win another state that had gone for Obama in 2008 and 2012, such as Iowa, Wisconsin, Pennsylvania, or New Hampshire.

Now, it’s entirely possible that, under the right circumstances, a Republican candidate could pull off this feat. However, given the fact that the GOP has lost four out of the last six Presidential elections, and lost the popular vote in five out of six of those elections, the odds of this happening seem remote indeed, at least not as long as Republicans continue suffering from their current demographic problems. In other words, the Democrats will be heading into 2016 with a huge built in advantage, and whomever ends up getting the Republican nomination will have quite a difficult task on their hands.

Notwithstanding all of this, though, there are some caveats in order. This kind of election analysis is, for example, assumes that recent electoral history will be repeated in the future and that, for example, California will remain a Democratic state for the foreseeable future while Texas remains a Republican one, at least at the Presidential level. While there may be good reasons at the moment for believing this to be the case, the possibility always exists that something will happen that will cause a change in the political balance of the country that will then be reflected at the Electoral College level.

After the 1988 election, for example, many political pundits were writing about the supposed “Republican lock” on the Electoral College as confidently as their successors are writing about a Democratic lock today. That argument was largely based on examining the results of elections going back to 1968 that showed Republicans gaining solid hold over the South, including Florida and Texas, while holding on to California. With this kind of built in advantage, pundits argued, Republicans would likely win Presidential elections well into the next century. We all know what happened after 1988, though. Bill Clinton won in 1992 and again in 1996 by capturing several southern states and California, which has not gone for a Republican candidate since. In 2008, Barack Obama made further inroads into that Republican “lock” with wins in Florida, Virginia, and North Carolina. In 20 years, we had gone from predictions of Republican Presidents for the foreseeable future to people wondering if we’d see another Republican President in the next decade.

That history serves to remind us that the current predictions of a Democratic “lock” on the Electoral College should be taken with a grain of salt. Things can change in American politics quickly, and for reasons that we won’t see coming until they’re actually right upon us. In the short term, though, and most certainly for the 2016 election, the current trends in the Electoral College should make Republicans very worried indeed. 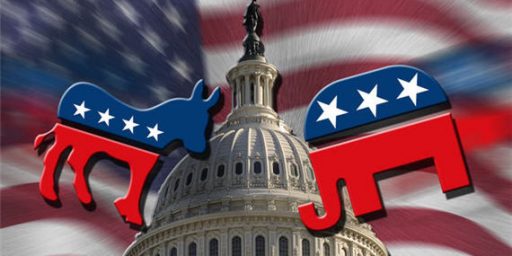 What Standards Should Be Applied to Game Theory?