Senate Judiciary Committee Chairman Chuck Grassley says he would not consider a Supreme Court nominee in 2020. But does he really mean it? 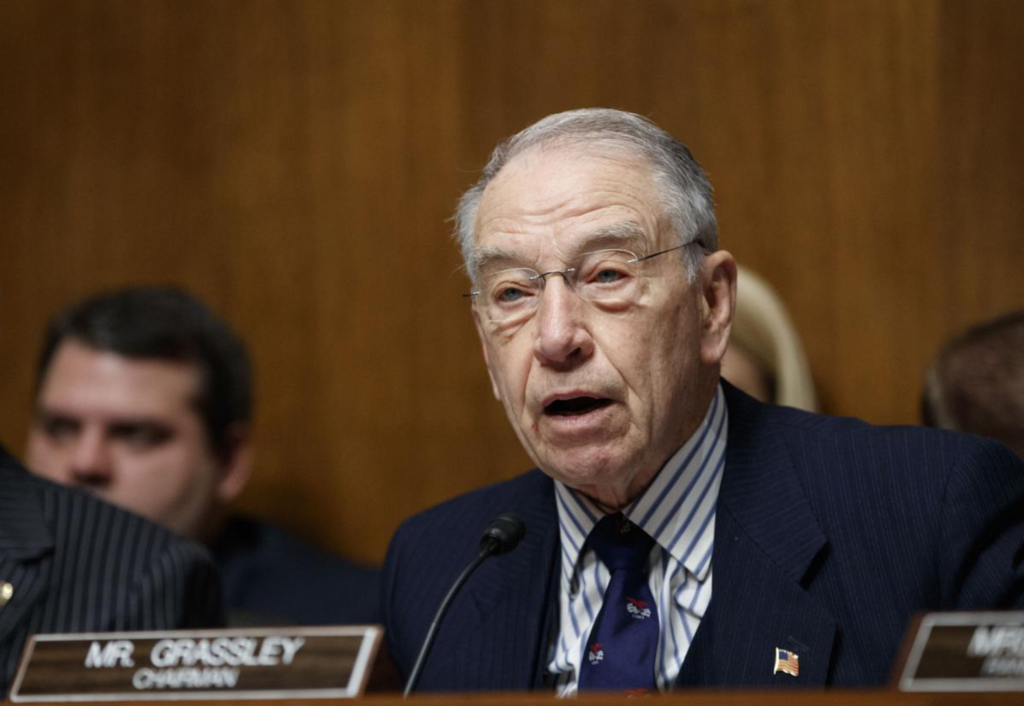 As James Joyner noted earlier this week, Senate Majority Leader Mitch McConnell said over the weekend that he would not commit to the idea of applying the Merrick Garland precedent to a Supreme Court nominee that President Trump might submit to the Senate during the 2020 election years. McConnell’s argument, based on the idea that his so-called precedent was based on the premise of a Senate controlled by the opposing party to that of the sitting President is, of course, a bit of legerdemain that is quite obviously not based in reality and that the Merrick Garland ploy was, as I said at the time, purely a political gamble by Senate Republicans that they would end up winning the Presidential election and be able to replace the late Anontin Scalia with a conservative Justice. To McConnell’s mind, if there would be a Supreme Court vacancy in the 2020 election due to retirement or some other reason, the Senate would move forward with the confirmation process notwithstanding the fact that they would likely be called out as hypocrites.

Senator Chuck Grassley, who heads the Senate Judiciary Committee and would likely retain that position if Republicans maintain their hold on the Senate, doesn’t share the opinion of the Majority Leader:

Senate Judiciary Committee Chairman Charles E. Grassley (R-Iowa) said Tuesday that he would not allow a Supreme Court vacancy to be filled in 2020, a position that puts him at odds with the Senate’s top Republican on an issue that has inflamed partisan tensions for more than two years.

In an interview with Fox News Channel’s Martha MacCallum, Grassley was asked whether he believes the Senate should take up a hypothetical Supreme Court nomination during 2020, when President Trump will be up for reelection.

“If I’m chairman, they won’t take it up,” said Grassley, whose committee is charged with holding hearings on Supreme Court nominees. “No, because I pledged that in 2016, that if the ball’s the same as it is. Now, if somebody else is the chairman of the committee, they’ll have to decide for themselves. But that’s a decision I made a long time ago.”

In 2016, Senate Majority Leader Mitch McConnell (R-Ky.) blocked the consideration of President Obama’s third nominee to the Supreme Court, Merrick Garland. At the time, McConnell said he was blocking Garland because voters “should have a say in the court’s direction” on Election Day. The move infuriated Democrats, who accused Republicans of abandoning their constitutional duty to advise and consent.

But on Monday, McConnell cited a different calculus, telling reporters in Louisville that opposition parties in control of the Senate do not traditionally confirm high court nominees during presidential election years.

McConnell’s remarks were viewed as a signal that he would be open to filling a potential Supreme Court vacancy in 2020.

Grassley’s remarks mirror those made by Senator Lindsey Graham, who sits on the Judiciary Committee:

Sen. Lindsey Graham (R-S.C.) on Wednesday said he would be willing to hold a Supreme Court seat open until after the election if there is a vacancy during the last year of President Trump’s term.

The remarks came after an audience booed and jeered at him as he defended Supreme Court nominee Brett Kavanaugh.

“This may make you feel better, but I really don’t care,” Graham said. “If an opening comes in the last year of President Trump’s term, and the primary process has started, we’ll wait until the next election.”

The remarks referenced the blockade by GOP senators in 2016 of Merrick Garland, former President Obama’s nominee to the Supreme Court to replace the late Justice Antonin Scalia.

Garland was nominated on March 16, 2016, but never received a hearing or vote from Republicans then controlling the Senate.

“If you look back at 100 years, no one has been replaced under that circumstance,” Graham told Atlantic editor-in-chief Jeffrey Goldberg in the interview at the Atlantic Ideas Festival. “I felt like I was doing the traditional thing there.”

Graham said that he has “honored” Democrats’ Supreme Court picks in the past, a comment that caused the audience to laugh and jeer. Graham voted to confirm Justices Elena Kagan and Sonia Sotomayor, both Obama nominees.

“I’m a conservative, proud of it, want conservative judges on the court when it’s our turn to pick,” he said. “When it’s their turn, I’ve honored their picks.”

For six years Democrat Patrick Leahy adhered to an unfavorable blue slip rule in the Judiciary Committee because he trusted Grassley to do the same if Republicans won the Senate. Needless to say, Grassley invented an excuse to change things the very first time Democrats used a blue slip to block a nominee he wanted to confirm.

But now we’re supposed to believe that if Stephen Breyer has a heart attack 15 months from now, Grassley will genially give up the chance of creating a 6-3 conservative court. After all, it’s only fair, and Republicans are all about being fair!

Well, here’s a quick test: Five years ago Grassley was part of the filibuster against all of President Obama’s nominees to fill vacancies on the DC Circuit Court. Ideology wasn’t at play, he insisted. The court was just underworked and didn’t need to be filled up. But guess what? Now that a Republican president is nominationg Republican judges, things have changed: a few months ago Republicans unanimously voted to fill an empty seat on this underworked court. And with Brett Kavanaugh on the Supreme Court, now they have another empty seat to fill.

Republican promises about judges aren’t worth the oxygen they use to utter them. If and when the time comes to confirm a Republican to the Supreme Court, Grassley will invent some reason why things are different this time and his promise doesn’t apply.

Drum’s cynicism, though it is obviously based in his partisan preferences, may be well-founded. Back in August of 2016, just two months prior to the election, Grassley suggested that there could be an opening for a hearing on Merrick Garland’s nomination after the election. At the time, it was unclear if Grassley was speaking for anyone but himself or if he was confirming speculation that Senate Republicans would seek to quickly confirm Garland in the event Hillary Clinton won the election in order to prevent her from naming someone far more liberal and far younger in Garland’s place after she took office. That, of course, never happened and we can only speculate what the Senate GOP would have done had Clinton won the election instead of Trump. Nonetheless, Drum does have a point that, under the right circumstances, it’s easy to believe that Grassley would find away around his apparent promise.

Realistically speaking, the odds that there will be a Supreme Court vacancy in 2020 that would require the Senate to consider a new nominee seem pretty low. On the conservative side of the Court, and after the death of Justice Scalia and the retirement of Justice Kennedy, the two oldest members of the Court are Justice Thomas, who is 70, and Justice Alito, who is 68. While there have been some rumors from time to time that Justice Thomas has considered retirement at an earlier enough time that he can enjoy his time off with his wife and family, there is no reason to believe that he is ready to step aside just yet. Additionally, with the retirement of Justice Kennedy, Thomas is now the longest-serving Justice on the Court which means that, among other things, he has the authority to assign opinion writing when he is not on the same side of an issue as the Chief Justice. He may wish to spend several years enjoying this new status on the Court especially since there is no sign that he is in ill health or suffering from any conditions that might cause him to retire early. Additionally, if Justice Thomas is considering retiring, it’s likely that he’d do so at the end of the Court’s current term in June 2019 rather than waiting until an Election Year. Similarly, Justice Alito has only been on the Court for about thirteen years, doesn’t appear to be suffering from any health issues, and seems unlikely to step aside any time in the next couple years. On the liberal side of the Court, Justices Ginsburg (85) is in good health and is unlikely to step aside voluntarily while Trump is in office and Justice Breyer (80) is also unlikely to retire while a Republican is in the White House. Beyond those four Justices, everyone else on the Court ranges in age from Justice Sotomayor at 64 to Justice Gorsuch, who is 51. None of these people is likely to step aside. Thus, we may not see another Supreme Court fight for the remainder of President Trump’s first term unless someone changes their mind or in the event there is a medical reason for one of them to step aside, which hopefully won’t happen.

The other factor that could end up avoiding a conflict between Grassley and McConnell in the event of a nomination battle in 2020 is the fact that Grassley may not be the Chair of the Judiciary Committee after this year. As Jazz Shaw notes, there have been some rumors that McConnell may wish to move Grassley over to head the Senate Finance Committee in the new Congress. This is a far more powerful position than heading the Judiciary Committee and its an assignment that Grassley would be unlikely to refuse if the offer were made. Additionally, it’s worth noting that if Republicans hold on to the Senate in November, Grassley would become the new Senate President Pro Tempore due to the fact that he would be the longest-serving Republican in the Senate due to the retirement of Utah Senator Orrin Hatch, making him third in line for the Presidency behind the Vice-President and the Speaker of the House. If Grassley steps aside as Chairman on Judiciary then Graham would be the most likely successor since he has seniority, but McConnell, ever the tactician, could seek to sidestep Graham and put someone more reliable in the position.

Thus, while these statements may seem to set up a conflict between McConnell and Grassley should they both be in the same position in 2020, the odds that a nomination will even come up are fairly low. That being said, anything’s possible so, as they say, stay tuned.