With the end of the Supreme Court term approaching, speculation about a Kennedy retirement is ramping up again. 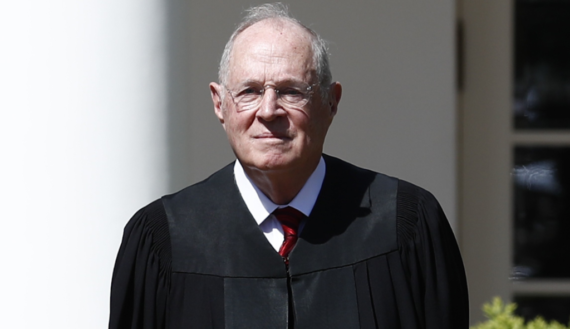 As we near the end of another Supreme Court term, speculation is once again turning to the question of potential Supreme Court retirements, and Anthony Kennedy’s name is back at the top of the list:

Chuck Grassley infuriated Democrats in 2016 by refusing to take up Merrick Garland for the Supreme Court. Now they’re growing even madder at the Senate Judiciary chairman for advising any high court justice contemplating retirement to get on with it.

“There is no principled stand. They will use whatever rationale they find expedient. There’s no conviction or principle to this. There’s no method to the madness,” said Sen. Richard Blumenthal (D-Conn.).

In the future when Republicans lose the Senate, he warned: “There will be a price to pay.”

Democrats think they have a shot a taking the majority back this fall and are aghast that Grassley and other Republicans are publicly nudging Justice Anthony Kennedy or other justices who are eyeing the exits to hang it up so they can confirm a new justice before the election. A Democratic majority would likely force President Donald Trump to nominate a more consensus pick for the Supreme Court, if Democrats would allow a vote at all after how Garland was treated.

The 84-year-old Grassley delivered his retirement advice in an interview with Hugh Hewitt Thursday. “I just hope that if there is going to be a nominee, I hope it’s now or within two or three weeks, because we’ve got to get this done before the election,” Grassley said. “So my message to any one of the nine Supreme Court justices, if you’re thinking about quitting this year, do it yesterday.

Grassley later clarified to reporters that he’s not telling Kennedy to retire. But he made clear that if anyone wants to get out during Trump’s presidency, they ought to do it now or Republicans may have to swallow a “more moderate” justice next year if they lose the Senate.

“I’m suggesting to them that if they’re the type of people that want Trump to replace them … that they ought to think about retiring yesterday,” Grassley told reporters. “Elections have consequences. We could end up without having a Republican Senate.”

By Grassley’s estimate, it would take more than two months from the time Trump names a new justice until Grassley’s committee would hold a hearing, and then a few more weeks before the justice would reach the Senate floor for a vote. If Kennedy or another justice were to retire now, conceivably the Senate could fill the vacancy in September or October, ahead of the election.

Grassley said he’s only heard “rumors” of a pending retirement. Other GOP senators said the same. But clearly those rumors are gaining steam: Asked a similar question in an interview last month, Grassley said it had been months since he’d heard any talk of Kennedy retiring.

“We can’t prepare for a Supreme Court vacancy until it actually happens. And you’ll know that [when] the guy or woman will wake up one morning and say: ‘I call it quits.’ And nobody else probably has any inkling of it,” Grassley said in late April.

Not surprisingly, many Democrats are citing the Merrick Garland precedent to push back against Grassley:

The open talk of filling a vacancy this year is a striking contrast to what happened in 2016, when Justice Antonin Scalia died in February, Garland was nominated in March and Grassley and Senate Majority Leader Mitch McConnell blocked him from having a hearing, much less getting a floor vote.

Now that Trump is in charge, and the Senate majority is in play, Grassley wants to go as fast as possible.

“Giving a push of Supreme Court justices toward retirement raises some serious questions. And in light of what happened to Merrick Garland I think Republicans ought to think twice,” said Senate Minority Whip Dick Durbin (D-Ill.). “It is a signal that they are worried about future control of the Senate in light of a Supreme Court vacancy.”

“What is their rule?” asked Sen. Chris Murphy (D-Conn.) of Republicans. “There is no rule.”

What’s interesting about Grassley’s comments, of course, is how blatantly political they are. In the Senator’s mind, Justice Kennedy (and even though he’s not mentioned by name, It’s clear he’s talking about Kennedy) should retire not because it’s time to hang up and enjoy some time with his grandchildren, but because of purely political considerations. While there’s no question that individual Justices have political preferences just like the rest of us do, Kennedy himself has never given the impression of being overtly partisan either in the time before he became a Judge and then a Justice or in the time since then. Nor is such partisanship apparent from his judicial record, which, while mostly conservative, has been moving closer to the Court’s center the longer he’s been on the court. Much as it was unlikely that Justice Ginsburg would be swayed by the numerous calls for her to retire (see here, here, here, here, and here) that were made in the final years of the Obama Administration, it doesn’t seem likely that the fact that Republicans could lose control of the Senate in November would be sufficient to motivate Kennedy’s decision one way or the other. If Kennedy is going to retire, it’s going to happen if and when he’s ready to hang up his robes, and he’s never given any indication before that he’s significantly motivated by publicly. That’s not to say that concerns about a possible successor would not play a role in Kennedy’s decision, but the fact that the GOP might not control the Senate by this time next year doesn’t seem like something that would influence his decision making.

This isn’t the first time that Kennedy’s name has come up in connection with retirement talk, of course. In the closing months of the Court’s last term, there was a host of speculation that the election of a Republican President could lead Kennedy, who is now the Court’s longest-serving Justice, to decide to hang up his robes. In April 2017, for example, Grassley, who arguably would be among those who might have inside information about such matters, dropped hints of a potential retirement at the end of the term. As with these remarks, the Senator didn’t mention Kennedy by name or claim but it was clear who he was referring to. The speculation around Kennedy picked up again during the final days of the term last June, much of it was focused on the fact that nearly all of Kennedy’s former law clerks would be in Washington for a reunion that the Justice holds every couple of years. As I noted on both occasions, one major signal that Kennedy would not retire could be found in the fact that he had hired a full slate of law clerks for the upcoming October 2017 Term as had all of the other Justices on the Court. While this isn’t necessarily a dead giveaway that a Justice isn’t retiring, it is a strong sign that they’re planning on being around for the new term. In the end, there was no retirement by Kennedy or anyone else. Several days after the end of the June term, though, it was reported that Kennedy was advising law clerks he was interviewing for the term that begins in October 2018 that he could decide to retire at the end of October 2017 Term, which means that if they were hired they would end up being reassigned to other Justices, or potentially to whoever might be appointed and confirmed to replace him. More recently, Nevada Senator Dean Heller speculated about a Kennedy retirement in a speech to supports but this seemed more like an effort by the Senate’s most vulnerable Republican to energize his base So, it’s possible that Kennedy will retire at the end of the term, or it’s possible that he won’t. We won’t really know until there is (or isn’t) an announcement.

Usually, of course, these retirement announcements come out of the blue, and it used to be customary that they typically came at the end of the term, but that has changed in recent years. Justice David Souter, for example, had privately notified the Obama White House as early as April 2009 that he intended to retire and announced his intentions publicly in early May of that year. Justice Stevens, meanwhile, announced his retirement in late April of 2010. In both cases, this gave the White House time to select a nominee and the Senate time to conduct the background checks and other investigations that are typically done prior to a confirmation hearing. If he does decide to retire, Kennedy could make a similar announcement early in order to give the President and Senate time to at least begin the process of naming, considering, and voting on his confirmation. One could argue, for example, that the fact that Kennedy has not made an announcement could be an indication that he’s not retiring. However, we won’t know for sure until we get to the end of the term in about six weeks.

If Kennedy does decide to retire, replacing him is likely to be a smooth process no matter how much Democrats may object by citing the Garland precedent or attempt to block the nomination. The most that Democrats could do is attempt to slow the process down somewhat by insisting on using every minute of debate time required under Senate rules, but the risk there is that it could prompt Republicans to change the rules to reduce debate time, something that can be done via a parliamentary maneuver that would require just a simple majority vote. Additionally, given the fact that the upcoming election includes races involving several Senate Democrats in red states who are clearly vulnerable, it’s unclear if the Democratic caucus would stay united in seeking to slow down the confirmation process, In any case, since confirmations of a Supreme Court Justice no longer require the Senate to get past the sixty vote threshold to invoke cloture thanks to the precedents set by Harry Reid in November 2013 and Mitch McConnell last year, it’s likely that whoever President Trump would pick to replace Kennedy would be confirmed in short order. Until then, we’ll just have to wait and see.