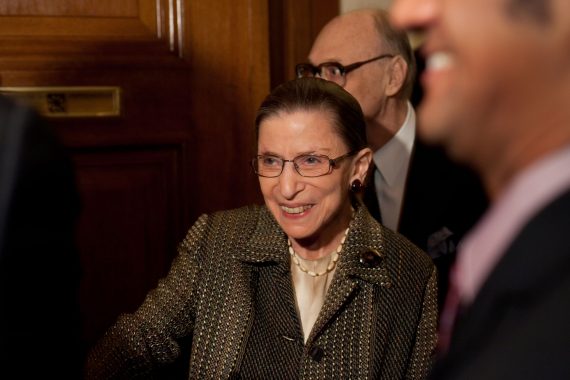 Via Ann Althouse comes an interesting story from today’s New York Times about some on the left who worry about a “nightmare scenario” if Justice Ruth Bader Ginsburg doesn’t retire before the 2012 elections:

Democrats and liberals have a nightmare vision of the Supreme Court’s future: President Barack Obama is defeated for re-election next year and Justice Ruth Bader Ginsburg, at 78 the oldest justice, soon finds her health will not allow her to continue on the bench.

The new Republican president appoints Ginsburg’s successor, cementing conservative domination of the court, and soon the justices roll back decisions in favor of abortion rights and affirmative action.

But Ginsburg could retire now and allow Obama to name a like-minded successor whose confirmation would be in the hands of a Democratic-controlled Senate. “She has in her power the ability to prevent a real shift in the balance of power on the court,” said Erwin Chemerinsky, dean of the University of California at Irvine law school. “On the other hand, there’s the personal. How do you decide to leave the United States Supreme Court?”

Some on the left say that the focus on the personal is misplaced. Ginsburg needs to put self-interest aside and act for the good of the issues they believe in, Harvard law professor Randall Kennedy wrote recently. Kennedy said 72-year-old Justice Stephen Breyer should leave, too.

Too much is at stake and both life and politics are too fickle to take the risk that everything will work out as the justices desire, Kennedy said.

David Garrow, a Cambridge University historian who follows the court, said Ginsburg’s situation points to an institutional problem for the court, “the arguably narcissistic attitude that longer is better.”

The longest-serving justice, William Douglas, was on the court for more than 36 1/2 years, reluctant to retire even after a debilitating stroke. “History teaches us that often longer is not better,” Garrow said.

The difference, of course, is that Justice Douglas suffered a stroke in 1974 which severely limited his ability to participate in Court business, something which he refused to recognize and which caused his fellow Justices at the time to delay hearings and the consideration of cases in order to stop Douglas from ruling while clearly incapacitated. Douglas finally retired in late 1975 but, even after that, continued to show up at the Court, file opinions, and even once attempting to sit in on oral argument in a death penalty case. (Source here)  He was, in other words, severely disabled and not able to function as a Supreme Court Justice.

There’s no similar situation here. Although Ginsburg was treated for cancer several years ago, she appears to have recovered quite well. What these people are asking, though, is for Ginsburg to step aside “for the good of the movement” because they’re afraid that President Obama will lose in 2012 and Ginsburg, who is 78, will step down, either voluntarily or by necessity, and give the GOP a chance to truly alter the direction of the Court. There are two flaws with this argument.

First, even if Ginsburg stepped down today it’s highly unlikely that President Obama would be successful in getting a nominee as ideologically to the left as her on the Court to replace her. Even before the 2010 elections, when Democrats had a near filibuster proof majority, Obama appointed two Justice who, while they are certainly liberal, did not have the record on issues like abortion rights that Ginsburg had before she was appointed by President Clinton. Now, with the Democratic majority in the Senate reduced significantly and elections only16 months away, the odds are that any Supreme Court confirmation would be a political battle royal, and that the President would likely select someone far more moderate than Ginsburg (or even Sotomayor or Kagan) to replace her. The people calling on Ginsburg to resign now are off by a year at least. If they’d done this in 2009 or 2010, it would’ve made a lot more sense.

Second, I see no reason why Ginsburg should sacrifice herself to a movement just because a bunch of law professors think she should. If she’s still able to do the job, enjoys doing it, and believes she has something to contribute to the Court, then why shouldn’t she? The attitude these people are displaying seems to be rather callous when you think about it.

It’s all academic anyway, because Ginsburg has made clear that she’s not going anywhere.

There are few more indelicate questions to put to a Supreme Court justice, but Ginsburg has said gracefully, and with apparent good humor, that the president should not expect a retirement letter before 2015.

She will turn 82 that year, the same age Justice Louis Brandeis was when he left the court in 1939. Ginsburg, who is Jewish, has said she wants to emulate the court’s first Jewish justice.

While declining an interview on the topic, Ginsburg pointed in a note to The Associated Press to another marker she has laid down, that she is awaiting the end of a traveling art exhibition that includes a painting that usually hangs in her office by the German emigre Josef Albers.

“Couldn’t think of leaving until after it is returned to me, which won’t be anytime soon,” she wrote.

She said much the same thing last year, and has also said that she has no plans to leave the Court before the 2012 elections.

Practically speaking, the fact that no Justices retired at the end of the just concluded term likely means that we won’t see another Supreme Court confirmation until 2013 unless someone is forced to step down for medical reasons, or dies. Supreme Court Justices are politically astute enough to know that a Supreme Court retirement the summer before a Presidential election would not be dealt with until after a new President takes office, largely because Republicans would seek to delay the hearings until after the election (frankly, I don’t think I’d object to that).

In any event, the issue of Supreme Court appointments should be of concern in 2012 because it’s highly likely that whoever takes the Oath of Office on January 20, 2013 will have a chance to appoint one or more justices based solely on the fact that several Justices are getting up there in years:

Over the course of four years, we could see 2-3 retirements, all of which would be game changers.