After grabbing a lead at the end of last year, Ted Cruz has seen Donald Trump completely reverse fortunes in Iowa with just one week to go before voting starts. 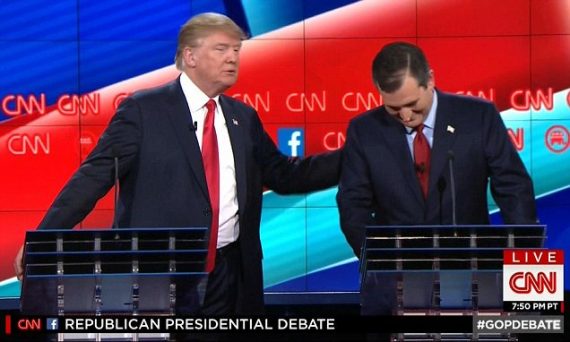 As 2015 drew to a close, Texas Senator Ted Cruz appeared to be pulling ahead in the polling in Iowa to the point where he had a four point lead over Donald Trump in the polling average and many pundits began to openly talk about Cruz winning in the Hawkeye State and then going on to build up a strong juggernaut through the rest of February and on into the SEC Primary in early March. This continued in the first polls taken after the Christmas and New Year’s holidays, which showed the race in Iowa tightening to some extent, but with Cruz still showing a strong lead. At that point, though, things began to change. Specifically, Trump, who had previously taken a hands-off approach toward Cruz that was markedly different from the manner in which he treated other candidates, began to take direct aim at the Texas Senator in an obvious effort to bring him down. The part of Trump’s attack that garnered the most attention, of course, was the suggestion that Cruz’s Canadian birth could pose problems for the GOP if the Texas Senator ended up being the party nominee. While Trump’s birther attack on Cruz was largely rejected by other candidates, it did appear from polling that the “questions” Trump was raising were having an impact on a not insignificant segment of Iowa voters, and thus an impact on the race. Trump also attacked Cruz as “a nasty guy” who “nobody likes,” and suggested that it would be impossible for a President Cruz to work together with Congress to get anything done given the fact that he has such as bad personal relationship with so many people in Congress. By the middle of the month, it was becoming apparent that all of these attacks were having an impact on the race in the Hawkeye State, and that Senator Cruz may have peaked too early.

Now, with one week left before the Iowa Caucuses, we find that Trump has completely reversed Cruz’s lead in Iowa and widened the gap between them:

Earlier this month, Fox News released a poll showing Ted Cruz leading Donald Trump by four points. The two had a sizable lead over everyone else in the state, and the poll was confirming what others were showing: Cruz had an advantage.

On Sunday, Fox released another Iowa poll, with substantially different results. Now, Trump is up by 11 points, a 15-point swing in the two weeks between surveys. This poll, too, mirrors the recent trend: Trump has regained the advantage.

It’s still a surprising development. Trump’s gained a lot, across the board, while most of his competitors have slipped. Cruz is still over-performing with conservatives and tea partiers (meaning that his support among those groups is 11 and seven points higher than his overall support), but Trump gained 11 and 17 points with those groups over the past two weeks. Cruz’s support among the groups fell.

So what’s going on? This is the same polling firm and the same methodology. But the voter pool is slightly different.

Two weeks ago, the percentage of respondents saying they would “definitely” go out and caucus on Feb. 1 was 59 percent. In this new poll, that dropped to 54 percent, meaning a 10-point swing toward those who would say they will “probably” go to the caucus. Two weeks ago, Trump trailed Cruz by six points among those who would probably vote. Now he leads with that group by 15 — more than his overall lead against Cruz.

But that’s risky for him. As we’ve noted, self-reporting of whether people will get to the polls is not always accurate and tends to depend on past voting behavior more than anything. In the new Fox poll, Trump gets 34 percent of Iowans, but 43 percent of those who will be going to caucus for the first time. Perhaps they will. But people who haven’t voted before are a lot less likely to vote than people who vote all the time, for perhaps obvious reasons.

Again, Trump’s gains are across the board, but he’s doing much better with a group of voters that seems less likely to vote. He could certainly win Iowa by an 11-point margin, but that depends on his people turning out — and on his having an operation to encourage them to do so (which the New York Times reports he doesn’t).

Notwithstanding the caveats noted above, about which I’ll have more in a moment, it’s worth noting that Trump has also seen his numbers increase in recent polling from sources other than Fox News, such as CBS News/YouGov and CNN/ORC to the point where the RealClearPolitics average for the state now shows Trump with a 5.2 point lead over Cruz and the trend lines seem to be clearly favoring the New York City businessman over the Texas Senator: (Trump is the blue line and Cruz is the black line in this chart) 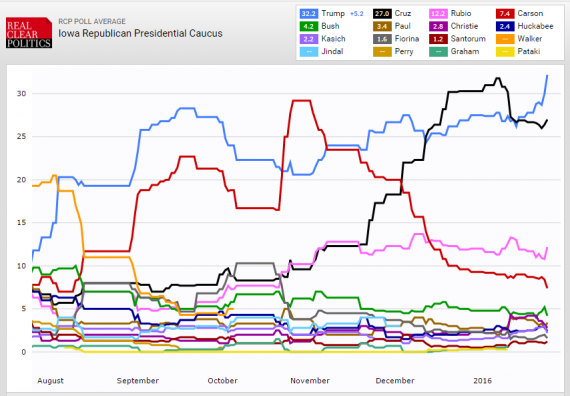 As the linked article notes, of course, the thing we don’t know about Iowa is the extent to which Trump is going to be able to translate poll numbers into support at the caucuses next Monday. As I’ve discussed before, the get out the vote effort is perhaps the most important part of the campaign at this point and that is even more the case in a caucus state like Iowa where voters must go out at night, potentially in bad weather, and spend several hours in a room with neighbors while everyone makes their case for their candidate before voting. On that note it’s worth noting that the long-term weather forecast is calling for snow on Monday night in Des Moines and the surrounding area where most of Iowa’s population is located. This kind of system requires voters that are committed to coming out, and a campaign organization that does everything it can to make sure they do, including providing transportation if necessary. By all accounts Ted Cruz has a fairly good operation in Iowa while Donald Trump does not, so the question is whether Trump’s supporters, many of whom have never participated in a caucus before, will show up or whether the numbers he’s showing in the polls right now will turn out to be largely an illusion. That’s something we’ll have to wait until Monday night to find out.