Driven Largely By Republicans, Public Opinion On The Supreme Court Hits A Low

A new poll indicates that the Supreme Court has become much less popular over the past several years:

Don’t let the cheering crowds outside the Supreme Court fool you. The largest share of Americans in 30 years has a negative view of the Supreme Court, according to a July survey by the Pew Research Center.

The Pew survey results could have been driven by dissatisfaction with recent Supreme Court decisions. The Supreme Court issued rulings in late June legalizing same-sex marriage nationwide and upholding the Affordable Care Act’s subsidies for buying insurance on state-run exchanges, both of which rankled conservatives. Sixty-three percent of survey respondents opposed to same-sex marriage, and 58 percent of respondents opposed to the Affordable Care Act, have an unfavorable opinion of the Supreme Court.

Support for the court increased among Democrats over the same period, however. From March to July, the percentage of Democrats with a favorable opinion of the Supreme Court went from 54 percent to 62 percent.

The survey results will come as no surprise to Republican presidential candidates, who have elicited applause for attacking the Supreme Court in their stump speeches. Sen. Ted Cruz (R-Texas) has gone furthest in his criticism, arguing that the Supreme Court justices should be elected.

As this chart shows, Republicans are largely the only demographic group that has an overwhelmingly negative view of the Court

And this one shows just how far apart Republicans and Democrats are in their opinions about the Court: 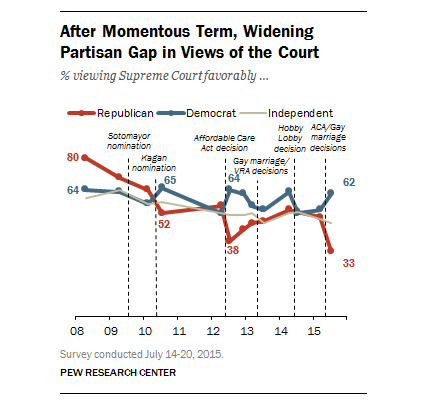 The fact that Republicans have gained a more negative attitude about the Court in recent years isn’t entirely surprising. The Court has handed down several decision over the past decade that are arguably favorable to a conservative viewpoint, such as it’s rulings on gun control, it’s ruling in the Citizens United case and other high profile campaign finance cases, and more recently its rulings last year that severely limited the President’s recess appointment power and upheld the rights of religious business owners to be exempt from an HHS contraceptive coverage mandate. To a large degree, though, the last several years have been disappointing for political conservatives on some of their most high priority issues. Just five months before the 2012 elections, the Supreme Court handed down a decision upholding the constitutionality of the Affordable Care Act, in a decision that saw an ostensibly conservative Chief Justice side with the Court’s liberal members to uphold the law. In 2013, another Republican-appointed Justice sided with the same group of liberals to strike down the Defense Of Marriage Act in a decision that set in motion a wave of cases that led to the legalization of same-sex marriage across the country. And, of course, this year, the Court hit conservatives with the double whammy of a decision that has effectively ensured that the Affordable Care Act isn’t going away any time soon and a decision that legalized same-sex marriage nationwide, again with the help of a Republican-appointed Justice joining the Court’s liberal members. The fact that the right has suffered all of these legal and political defeats at the hand of the Court, and that it happened with the help of Justices appointed by Republican Presidents has no doubt made conservative resentments toward the Court that go back to the days of the Warren Court and, later, the decision in Roe v. Wade even stronger.

Chris Cillizza looks at these numbers and sees cause for worry:

The rising tendency to view the Court through a partisan lens is problematic for the country — and its politics. The Supreme Court, for decade upon decade, was viewed as the one thing in our increasingly polarized world that wasn’t subject to the partisan winds.  Yes, the justices were (and are) appointed by a president and confirmed by the Senate. But, the whole idea of a lifetime appointment was aimed at insulating them from the ups and downs of political Washington. (Worth noting: Sen. Ted Cruz, among others, proposed term limits for the justices in the wake of this session.)

No longer. The Court is now viewed like its other two co-equal branches — Congress and the White House; it’s regarded by many Americans as just another pawn in the political game.

Whose fault is that?  Ours or the Court’s? There’s no question that the Court has been involved in a number of very high profile cases with major societal and political implications over the past decade or so — starting with Bush v. Gore and going all the way through the decision that legalized same sex marriage nationwide.

At the same time, our increasing polarization as a country means we tend to see everything — from Cecil the lion to Beyonce to the Supreme Court — in partisan terms. Everything is political these days, even the branch of government purposely created to be above day-to-day politics.

Point is: The Supreme Court is increasingly regarded as something less than a neutral arbiter of the various debates in the country. A failure to recognize any referee as unbiased means that you can always say the game was rigged when the result goes against you.   That’s a horrible thing for democracy.

Cillizza’s concerns are well-placed, but to some extent I think they are a bit overblown. The partisanship that this poll reflects is hardly new when it comes to public opinion of the Supreme Court. Dating all the way back to the Warren Court’s decisions on civil rights and the rights of criminals under the Fourth, Fifth, and other Amendments to the Constitution, there has always been some degree of partisan rancor surrounding controversial high profile decisions. Granted, this has become a bigger issue as our political culture itself has become more partisan, but that’s not something that’s new either. The Court’s decision in Roe v. Wade, for example, was the catalyst for an entire political movement that continues to resonate to this day. When group opposed to the decision hold their rally every January 22nd on the anniversary of the decision, the Supreme Court is always a prominent target of the protests even though the Court itself has not considered an abortion case in more than a decade. Additionally, partisan rancor toward the Court is hardly a conservative thing as the reaction of Democrats to decisions such as Bush v. Gore, Citizens United v. FEC, and Burwell v. Hobby Lobby demonstrate quite clearly. Partisans attacking the Court when it decides a case in a manner they disagree with, regardless of what the law might say on the matter, is hardly something limited to one political ideology and is arguably a tradition that dates back as far as the Dred Scott case.

At the same time, Cillizza does have a point about the impact that increased partisanship surrounding the Court could have in the future. On some level, the law depends on the people having a respect for its ultimate legitimacy and if people start to see the Court system as just another tool of party politics, then it will have a negative impact on respect for the law in general. I’m not sure what the solution for this might be, though. Courts can’t really refrain from getting involved in cases that raise controversial political issues just because of concerns about public opinion. Indeed, the entire purpose of life tenure for Federal Judges is to remove judges from political pressure. In the end, the only way to change the problem that Cillizza talks about is to do something about the increased partisanship that has become an endemic part of our political. I don’t see any way to stop that, though, so for better or worse we’re stuck with the world we’re living in.