The final spending bill for the 2016 Fiscal Year sailed through Congress today, marking the end of a very successful first two months in office for Speaker Paul Ryan 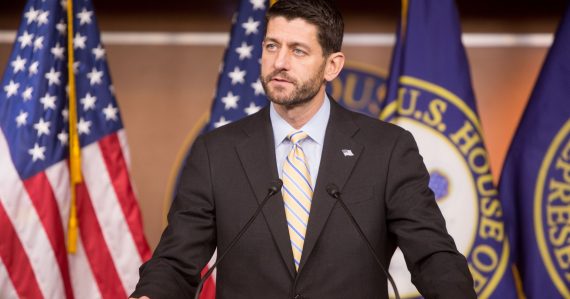 With the hours of the last Friday before Christmas ticking down, Congress has passed a spending bill for the rest of the fiscal year with relative ease, which appears to be another demonstration of the smooth sailing that Paul Ryan has enjoyed during his first two months as Speaker of the House:

WASHINGTON — Congress on Friday morning overwhelmingly gave final approval to a sweeping, year-end fiscal package that includes a $1.15 trillion spending measure as well as $620 billion in tax breaks for businesses and low-income workers.\

The bill now goes to the White House, where President Obama has said he will sign it.

After a period of belt-tightening in Washington — including automatic budget cuts imposed in 2013 — the spending measure for 2016 provides a notable $66 billion increase in federal outlays above previously agreed-upon limits, divided equally between military and nonmilitary programs. It also represents a return to a more traditional appropriations process, with lawmakers directing money to an array of their priorities, including a $1.4 billion increase for military construction projects and $2 billion increase for the National Institutes of Health.

In keeping with a bipartisan compromise, hashed out in an era of divided government and deep-rooted philosophical differences, all sides claimed victory.

The White House and Congressional Democrats said they had thwarted the Republicans’ main policy goals, including efforts to cut off government financing for Planned Parenthood and put restrictions on Syrian and Iraqi refugees, while securing a number of their own priorities, including tax benefits for working Americans and to promote renewable energy.

“I feel almost jubilant about what is in this appropriations bill,” the House Democratic leader, Representative Nancy Pelosi said in an interview.

In concrete, and personal terms, however, the approval of the legislation capped several weeks of early successes for Speaker Paul D. Ryan, Republican of Wisconsin, who mustered a majority of Republicans in favor of the compromise spending measure.

After ushering through major highway and education bills that had lingered on the Congressional agenda for months, Mr. Ryan, who is the former chairman of the tax-writing Ways and Means Committee, pushed through the major tax-break package that many Democrats opposed, but even they acknowledged fit with his larger vision for fiscal policy.

“This has been a busy month for all of us,” Mr. Ryan said in speech on the House floor moments after the vote. “We passed more major legislation in a few weeks than we have in a few years.”

Budget watchdog groups sharply criticized the legislation, saying it would add $2 trillion to the nation’s debt over 20 years.

In the House, which approved the tax breaks on Thursday, the vote Friday morning on the spending measure was 316 to 113, with 150 Republicans and 166 Democrats supporting the bill.

The Senate followed with uncharacteristic alacrity. In expedited floor action, on the edge of the holiday recess, the Senate voted to end debate on the overall legislation, dispensed with several procedural steps, and approved the package. The vote was 65 to 33.

The spending measure includes some major policy provisions, including a lifting of the 40-year ban on crude oil exports and the reauthorization and expansion of benefits from emergency workers suffering from health problems related to their work responding to the Sept. 11 attack in New York City.

In response to concerns raised partly by recent terrorist attacks, the spending measure requires more vigorous security checks as part of the visa-waiver program, by which millions of visitors enter the United States under an expedited process. The package also incorporates legislation that expands the sharing of information between private firms and federal security agencies to prevent cyberattacks.

The Obama administration has expressed particular satisfaction that, after weeks of tense negotiations, it succeeded in fending off numerous policy amendments that Republicans had sought to attach to the spending bill, including efforts to block environmental and labor rules.

Mr. Ryan, while criticizing the last-minute catchall nature of the legislation, hailed its passage as a triumph for conservative ideals and for the country.

“This bipartisan compromise secures meaningful wins for Republicans and the American people, such as the repeal of the outdated, anti-growth ban on oil exports,” he said in a statement. “The legislation strengthens our military and protects Americans from terrorist threats, while limiting the overreach of intrusive government bureaucracies.”

Not surprisingly, the fact that both parties are claiming victory after the passage of the bill isn’t necessarily sitting well with everyone. Many Democrats, for example, are upset that the bill doesn’t include further aid for the fiscally troubled island of Puerto Rico, which has spent much of 2015 in serious fiscal trouble that only promises to continue into the new year. Their is some aid that will allow government institutions on the island to ride out the immediate storm, but a long term solution remains unavailable. Among those solutions is the fact that, unlike states, the government subdivisions in Puerto Rico and other territories are not legally able to use the debt relief provisions of Chapter 9 of the Bankruptcy Code to deal with creditors. There has been discussion about expanding Chapter 9 to allow that to happen, but for whatever reason those provisions were not included in this bill. For conservative Republicans, the fact that the Omnibus Bill ended up increasing spending is not sitting well with most people on the right especially the candidates for President that are serving in Congress. Additionally, as with the Budget Bill that was passed at the end of October, the spending bill largely keeps in place the funding for Planned Parenthood, much of which actually consists of reimbursement by Medicaid for patients who utilize Planned Parenthood clinics, an issue that some on the right were willing to shut the government down over just three months ago. Because the bill addresses many issues that the right has been pushing for for years, though, such as ending the ban on the export of petroleum, a ban that no longer makes sense now that the United States is a net oil producer, though, efforts to organize and real opposition to the bill were destined to fail from the start.

If nothing else, the seeming easy and lack of controversy with which this bill sailed through the House of Representatives in particular is a testament to the extent to which, for the moment at least, Paul Ryan seems to have better control over the House Republican Caucus, and a better relationship with groups like the House Freedom Caucus, than John Boehner ever did. Granted, there were a substantial number of Republicans who voted against the final measure, but Ryan did manage to get a majority of the House GOP Caucus behind him and that, joined with all but 22 of the Democrats in the House, gave him an overwhelming bipartisan majority rather than a nail-biting final vote like so many that we’ve seen in the past. The question going forward, of course, will be whether this era of good feeling on the House Floor continues into the new year. The fact that we’ll be in a hard fought election year suggests that things will become more difficult for Speaker Ryan going forward, but it’s also likely that many House Republicans will want to avoid the kind of appearance of gridlock that we’ve seen from Congress in the past if only because it’s rather clear that the voters don’t like it. For the time being at least, though, it’s been a good two months for Speaker Paul Ryan, when January comes we’ll have to see if he can keep the House moving forward.