As gas prices fall, the politics of fuel prices are changing. 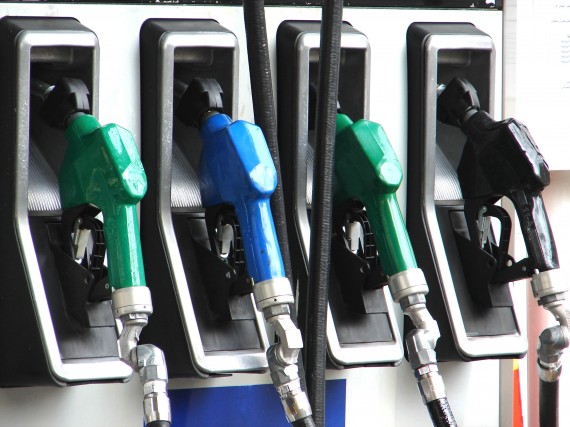 As I noted last week, gasoline prices have been falling consistently for the past several months, due in no small part to the slowing world economy, and now it appears that we’ll see prices below $3.00 per gallon in time for the July 4th holiday:

South Carolina is the first state to see its gas prices drop below $3 a gallon – the first time a state price has been that low since January.

AAA, the national motorists’ organization, forecasts that within the next week, the Palmetto State, whose average gasoline price is now $2.98 a gallon, might be joined by Mississippi (currently at $3.05 a gallon), Alabama ($3.06), and Tennessee ($3.06) – just in time for the Independence Day holiday. Prices in those states are dropping by about a penny a gallon per day.

It’s not out of the question that yet other states might crack the $3-a-gallon level by Labor Day.

And the price decline is accelerating, says Michael Green, a spokesman for AAA. “This is great news as we move into the middle of the summer driving season,” he says.

The falling price of gas is a key reason that AAA predicts a decade-high number of travelers – some 42.3 million – on the road for the Fourth of July holiday. This would be up 4.9 percent from last year.

“Declining gasoline prices are motivating a lot of people to get on the road. And because the holiday is on a Wednesday, a lot of people are planning to take off the entire week,” Mr. Green says.

Gas prices are an important factor in how consumers feel about the economy. Many people know how much they paid for their last tank of gasoline. In addition, they see the price advertised at gas stations every day.

Tumbling gasoline prices is one reason that consumer confidence has held up, says chief economist Dennis Jacobe of Gallup, the polling organization.

On Tuesday, the Conference Board, a business research group, reported that its Consumer Confidence Index had fallen modestly for the fourth month in a row.

“Confidence would be a lot lower if not for falling gasoline prices and the benefits they are providing,” says Mr. Jacobe.

If gas prices continue to fall, he says, it should help President Obama and other incumbents. “Obama gets hurt when they are going up,” he says. “But he gets the most pickup with an improving economy.”

In theory, the decline in gasoline prices should become a significant economic tail wind this summer, says Mark Zandi, chief economist at Moody’s Analytics, in an e-mail.

A decline in the price of oil, if sustained, will save households about $35 billion over the coming year, Mr. Zandi estimates. That would be equal to one-third of the payroll tax cut enacted this February.

“And I would expect prices to fall further in coming weeks,” he writes.

As I noted in my post about this last week, even though the reason that energy prices are falling is tied into worsening economic conditions around the world, falling gas prices are potentially good news for the U.S. economy not just because it means more money in consumer’s pockets, but because it also helps cut back on transportation costs for business. While I wouldn’t exactly expect our economy to start booming because of this, it’s likely that it will be enough for us to weather whatever storms may come from Europe and the rest of the world. Politically, the fact of falling gas prices no doubt helps President Obama to some degree. As I noted back in March, there was some evidence that the rising gas prices were hurting President Obama in the polls even though the reality of the situation is that there is very little that he could do to impact energy prices in the short term. Republicans, meanwhile, spent the spring bashing the President over the price of gas and making absurd promises such as Newt Gingrich’s guarantee of $2.50 per gallon gas and Michelle Bachmann’s absurd suggestion that she would get the price of gas below $2.00 per gallon.

So what are Republicans saying now that gas prices are falling and the summer of $5.00 per gallon gasoline is but a momentary nightmare? Pretty much what you’d expect them to say:

President Obama would seem to be in line to have some credit pointed his way.  Having been roundly criticized for the spike in gas prices earlier this year, you would think he would deserve the credit for their rapid falling.  The Republican Party would argue otherwise.  Republicans who incessantly criticized President Obama’s energy policies as being the causes of the price increases say he has absolutely nothing to do with their fall and deserves no credit.

Average prices of gasoline have fallen more than $.70 per gallon since the reached a high of $4.00 earlier this year.  Yet Senator John Barraso who was one of the more vocal critics of Obama’s energy policies now just continues to criticize.  When prices were rising he said

“[Obama is] fully responsible for what the American public is paying for gasoline” and calling the administration’s energy policies “at best ineffective and at worst … contributing to the higher gas prices,”

Yet when the Huffington Post asked the Senator if he still held the President responsible now that the prices have fallen he said,

“People are still feeling pain at the pump and pain at the plug, and it’s a result of the administration policies,”

More broadly, though most Republican politicians have gone silent on the entire issue of gas prices ever since prices started falling:

As the price at the pump surged this winter and spring, Republicans seized the issue to attack President Obama.

Mitt Romney called on President Obama to fire his “gas hike trio,” three top Cabinet officials he accused of helping hike fuel prices. Then-presidential candidate Newt Gingrich pledged to bring back the days of $2.50 a-gallon gas. And Speaker John Boehner told his GOP troops behind closed doors that, “This debate is a debate we want to have.”

As gas prices have dipped, the issue has all but disappeared as a talking point, both on the campaign trail and in the halls of Congress. Two charts tell the tale. The first tracks the price of gas.oline since January 2008, the last presidential election year. Since then, there have been three distinct spikes in prices, in June 2008, May 2011 and earlier this year

Now, in reality, it’s absurd to give the President credit for falling gas prices as it was to blame him when they were rising. In both cases, the market is being influenced by outside supply and demand forces that are beyond the control of any American President. Moreover, a politician who makes a promise that they will get the price of gas below a certain level is doing nothing more than pandering to voters and making a promise that they cannot possibly keep, unless of course the way they plan to lower gas prices is to force the economy into a recession.  Additionally, there’s no rational reason why a President should either benefit when fuel prices fall or be harmed when they go up, but voters tend to hold politicians responsible for many things that they have no real control over and politicians play into that by making promises that they cannot keep.  Of course, just as it was absurd for Republicans to attack the President when gas prices were rising, it would be equally absurd for Democrats to attempt to argue that he deserves credit when they begin to fall.

Joe Gandelman has a prediction about how the politics of this will play out:

Yep, that’ pretty much sums it up I think. Isn’t politics just wonderful?