With a third Democrat crossing the aisle to support her, Gina Haspel now has the votes she needs to become the next C.I.A. Director. 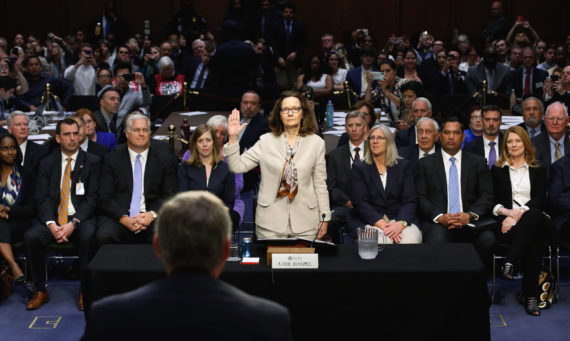 With a third Democratic Senator announcing their support for her nomination, Gina Haspel now appears to have the support she needs to be confirmed as the next director of the Central Intelligence Agency:

Gina Haspel appears to have secured enough votes to be confirmed as the country’s next CIA director after stating in a letter to a top Democrat that the agency never should have detained terrorist suspects and employed brutal interrogation techniques against them.

In announcing his support for Haspel, Senate Intelligence Committee Vice Chairman Mark R. Warner (D-Va.) said Tuesday that he had asked her to write down her views because he believed that in one-on-one meetings she had expressed greater regret, and more resolute moral opposition to the agency’s interrogation program than she had communicated during her confirmation hearing last week.

“I believe she is someone who can and will stand up to the President if ordered to do something illegal or immoral — like a return to torture,” Warner said in a statement, citing his past interaction with Haspel and the overwhelming support for her among the agency’s rank and file. He added that he also had “respect” for those “who have made a different decision” about her nomination.

Warner’s support for Haspel provides more opportunity for her to gain the backing of other lawmakers who were on the fence about her nomination. Several Democrats facing tough reelection battles this year, as well as Republican Sen. Jeff Flake (Ariz.), have been caught between the pressures of an administration and agency forcefully lobbying for Haspel’s confirmation and the admonitions of senior senators like John McCain (R-Ariz.) and Dianne Feinstein (D-Calif.), who have said that a vote for Haspel is effectively telling the world that the United States condones torture.

Warner said in an interview that he had “been wrestling with this” decision in light of such warnings — which, he said, were “all fair points.”

But he stressed that Haspel “had been more forthcoming in private,” and that for a career spy like Haspel, it had to have been “hard to have that kind of debut in that public a setting.”

He added that the CIA would also be making “some fuller declassification” of records related to Haspel’s career, but that he “would always urge more.”

“I believe she is someone who can and will stand up to the President if ordered to do something illegal or immoral—like a return to torture,” he says. https://t.co/yDRMRaeus3 pic.twitter.com/acaWvSRI3b

From the time that she was named to replace Pompeo as the Director of the C.I.A., it was clear that Haspel’s role in the torture program would be the main focus of her confirmation hearing and potentially could have been the issue that led to trouble for her confirmation. There’s no question that Haspel has had a long and distinguished career at the agency that both pre-dates and post-dates the period after 9/11 when torture was an agency practice. However, her role and activities during the period in the wake of the 9/11 attacks in the agency’s operation of black sites at which prisoners were interrogated raised serious questions about her fitness for the office to which she was named. When the President first put her name forward to replace Mike Pompeo at the top of the nation’s top intelligence agency, for example,  it was reported that Haspel had overseen the torture of at least one al Qaeda suspect while she was in charge of one these sites in Thailand. That report was later revised to make clear that she did not directly oversee any acts of torture although it’s clear that she was aware of what was going on with respect to those suspects. Additionally, it has been largely unrefuted that she played a role in attempting to cover-up the agency’s role in conducting torture of prisoners by pushing for the destruction of evidence that such torture had taken place. This last point is particularly relevant given the fact that President Trump has in the past said that we should go back to using the interrogation techniques that Haspel and others engaged in under C.I.A. auspices during the early years of the “War On Terror.” For all these reasons, Haspel’s answers to both her role in past agency action and the role she played in covering it up were entirely appropriate and relevant to the fate of her confirmation by the Senate.

Haspel’s testimony at her confirmation hearing last week left some Senators dissatisfied with her responses about her record and about how she would act as Director of the C.I.A. were she confirmed. Specifically, during the public portion of her testimony, Haspel declined to say outright whether she believed the agency had acted improperly when it utilized so-called “enhanced interrogation” techniques such as waterboarding which has been clearly identified as torture under both U.S. law and international treaties to which the United States is a signatory. She was also reluctant to answer questions from several Democratic Senators about whether she believed the torture techniques utilized during the post-9/11 era were wrong and whether the agency was wrong to engage in them. Instead, she engaged in mostly what constituted weasel words that one might expect from a nominee who doesn’t want to take a definitive stand either way. This led several Democratic Senators who had not stated their position on her nomination, such as Maine’s Independent Senator Angus King, to announce that they would oppose her nomination.

Notwithstanding those announcements, it quickly became clear that Haspel’s nomination was pretty much assured to gain the votes it needed in the Senate. On the Republican side, the only confirmed no vote at the moment appears to be Kentucky Senator Rand Paul, who announced his opposition weeks ago and doesn’t appear likely to change that vote as he did with the vote to confirm Mike Pompeo as Secretary of State. Additionally, Senator John McCain, who remains in Arizona recovering from treatment for cancer, had already expressed doubts about Haspel’s nomination and issued a statement urging the Senate to reject her nomination in the wake of her testimony.  McCain, however, is unlikely to be in Washington to vote against Haspel himself, and it doesn’t appear that his opposition has persuaded any other Republicans to join Senator Paul and himself in opposing her nomination. For example, last week both McCain’s close friend South Carolina Senator Lindsey Graham and Maine Senator Susan Collins announced that they would support Haspel’s nomination. Additionally, by the end of last week two Democrats, West Virginia’s Joe Manchin, and Indiana’s Joe Donnelly had announced that they too would support Haspel on the Senate floor. Now, with Warner’s announcement, Haspel’s nomination has more than enough support to win confirmation.

Warner’s announcement of support comes at the same time that Haspel has supplemented her testimony and how says that she believes that the agency was wrong to engage in torture in the post-9/11 era:

WASHINGTON — CIA director-nominee Gina Haspel, who ran a secret CIA prison after 9/11 where a detainee was tortured, asserted for the first time publicly Tuesday that the CIA’s program of brutal interrogations was a mistake that “ultimately did damage to our officers and our standing in the world.”

Haspel’s significant new statement, in a letter to the ranking Democrat on the Senate intelligence Committee, Sen. Mark Warner, all but assures that she will be confirmed, Senate aides said. Shortly after the letter was released, Warner announced he would vote for Haspel.

In newly released written answers, Haspel also said she learned lessons from an infamous mistake by the agency — the wrongful kidnapping of Khalid al-Masri, a German citizen who was abducted in Macedonia and tortured, he says, in a secret CIA prison in Afghanistan. Other terror suspects were kidnapped by the CIA during that period using a flawed legal justification, Haspel acknowledged, without explicitly detailing what her role was in the so-called “renditions.”

Haspel also affirmed in her written answers that the CIA believes Iran is complying with the nuclear deal that President Trump withdrew from, and that she agrees with the intelligence assessment that Russia interfered with the 2016 presidential election. She promised to cooperate fully with Special Counsel Robert Mueller’s investigation into that matter.

Asked whether President Trump has insisted that she pledge her loyalty to him, Haspel answered, “No.”

In the letter to Warner on brutal interrogations, Haspel took a stand that she repeatedly declined to take during her confirmation hearing, when she was asked over and over to pass judgment on a CIA program that many believe was a departure from American values. She avoided answering, saying instead that she supports the current law banning brutal interrogations across the U.S. government.

“While I won’t condemn those that made these hard calls, and I have noted the valuable intelligence collected, the program ultimately did damage to our officers and our standing in the world,” Haspel wrote in the new letter. “With the benefit of hindsight and my experience as a senior agency leader, the enhanced interrogation program is not one the CIA should have undertaken.”

This statement appears to have been sufficient for Senator Warner, and his announcement that he will support her is likely to bring other Democratic votes along with him. Additionally, it’s likely that other Democrats up for reelection in predominantly Republican states are likely to cross over and support Haspel. This likely includes Democrats such as Heidi Heitkamp in North Dakota and, possibly, Senators such as Claire McCaskill in Missouri and Bill Nelson in Florida. Even if that doesn’t happen, though, Warner’s vote alone will be enough to ensure Haspel’s nomination. Let’s hope it’s not a confirmation that the Senate comes to regret.

Update May 16, 2018: Late yesterday, Senators Heidi Heitkamp of North Dakota and Bill Nelson of Florida announced that they too will support Haspel on the Senate floor. This means that there will be more than enough votes to confirm her nomination in the final vote.