Our insistence on relying on an 18th Century understanding of electoral systems is our ongoing bane (if one values representative government).

While I noted this in the comments of James Joyner’s post, the basic point is so important that it needs its own post: the core problem of representation in our elections is not who draws the lines, it is the lines themselves. Single-seat districts simply cannot be drawn in a way that actually represents voters accurately. The electoral system we use to elect most legislative bodies in the United States, most notably both Chambers of the United States Congress privileges the geographic distribution of voters over and above the distribution of interests of those voters.

The problem is a system of single-seat elections. Full stop.

That problem is exacerbated by a too-small House, the maldistribution of seats in the Senate, and the usage of primaries to nominate candidates to run for office.

Let me be clear on what “the problem” is: it is the simple fact that our elections do not produce representative outcomes. For example, it is possible for our system to produce what political scientists call a “spurious majority” in the House, meaning that the party that gets the most votes nationally (i.e., the party with the most democratic support) can still lose the chamber. This happened as recently as 2012. We also know that given geographical distribution that currently the Republicans likely only need to win ~45% of the national vote to win the majority of seats in the House.

If one’s response is “So what? Those are the rules!” All I can say is that rules can be changed, and we do it all the time. Injustice ought to be rectified when it can. We adjust the rules of pro sports almost annually to refine competition, how much moreso should we be concerned about competition for political power?

Since the various forces that dictate where people live include, but are not limited to, income level, race, age, and education level (which are not mutually exclusive) affect partisan preferences and political interests the more geography is a major variable in elections the more the physical distribution of voters matters. Quite clearly any system of representative democracy has geography as a variable. The question is: how much does the system amplify its importance over other factors? Single-seat districts make geography central.

We know that the residential patterns in cities, suburbs, exurbs, and truly rural areas make drawing districts a challenge, as the 538 post James noted demonstrates. Moreover, any single-seat district is likely to be biased in some way and affects the contents of adjacent districts, and which cascades to affect the nonadjacent.

Every line drawn and every border defined is a choice (whether it is a partisan choice or one done by algorithm) that dictates the probability of which party will win the seat in the district.

If I draw a boundary that contains 60% R and 40% D, I have all but guaranteed an R winner before any party nominates a candidate or any citizen casts a ballot. Yes, a given set of candidates or national mood might influence a specific contest. Yes, the demographics of the district can change. But the reality is that the very act of drawing a district boundary is a choice about who is likely to win that district (and it is impossible to draw all districts 50-50 and even doing that is a choice).

A multi-seat district with proportional representation diminishes (potentially to the point of eliminating) the power of the lines. If the district is 60-40 R to D and there are five seats in the district, you would likely have 3 Rs and 2 Rs going to Congress and the outcome would be dictated far more by the actual preferences of the voters rather than that way the district lines are drawn. And, really, if the system was proportional, people could vote their sincere preferences and deviate from the Rs and Ds, so maybe you get 2 Rs, 1 D, 1 MAGA, and 1 Democratic Socialist.

If the goal is representation then single-seat districts, which tends to limit the number of parties that voters have to choose from, and that privileges where the voters live rather than what they want government to do, is a problem.

I would note, without snark, that the first chamber of the Congress is the United States House of Representatives and that the Framer’s goal was for the chamber to be the voice of the people. The problem is that the system they deployed to elect that chamber was based on a very rudimentary knowledge of how elections could be conducted. We are steadfastly insisting that we stick to a technology that was invented hundreds of years ago while ignoring a substantial amount of innovation since that time.

A note: we could retain single-seats districts and have proportional outcomes if we adopted MMP (Multi-Member Proportional Representation). In that system (used, for example, in Germany and New Zealand), voters would cast a vote to elect a representative from their district, but also a vote for a national party list. The number of seats a given party would have in the legislature would be dictated by the percentage of votes won by that party in the national contest. There is more info on this at the link below, “Comparative Electoral Systems Basics.” 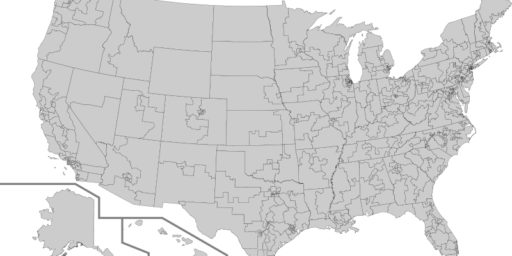 Single-Seat Districts are a Huge Problem