Most Americans disapprove of the President's handling of our relationship with Russia, and foreign policy more generally, in the wake of the Helsinki Summit. That's not having much of an impact on his overall job approval, though. 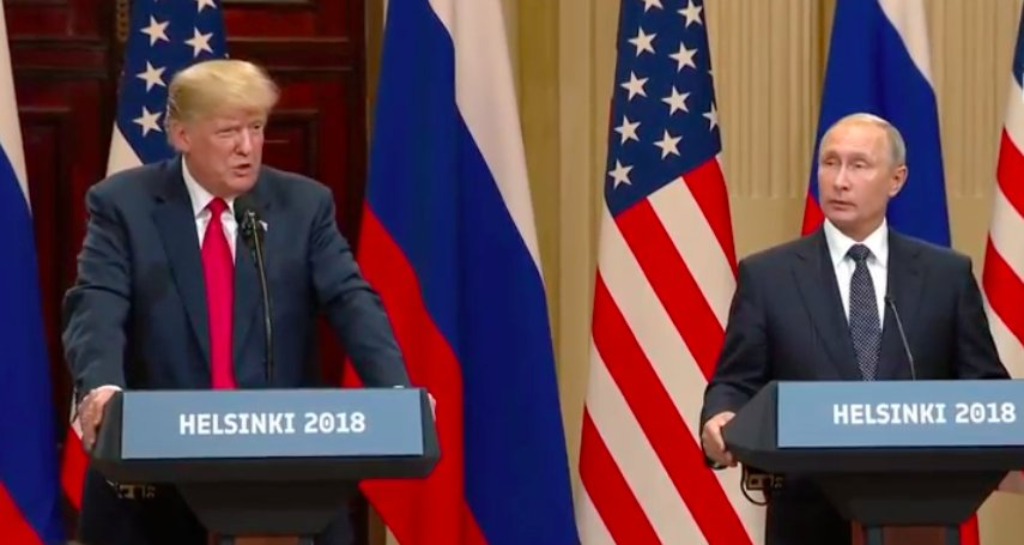 A new poll from ABC News and The Washington Post shows the President getting largely negative reviews for his summit meeting with Russian President Vladimir Putin:

By wide margins, Americans give President Trump negative marks for his conduct during a summit with Russian President Vladimir Putin last week and for his casting doubt on U.S. intelligence conclusions that Russia interfered in the 2016 presidential election, a new Washington Post-ABC News poll finds.

But public reaction nationally appears more muted than in Washington where Trump faced withering bipartisan criticism for appearing to side with Putin over U.S. intelligence agencies at a Monday news conference in Helsinki. Most Americans do not feel Trump went “too far” in supporting Putin, and while more Americans say U.S. leadership has gotten weaker than stronger under Trump, his ratings on this question are slightly improved from last fall.

The findings indicate that while Trump was judged critically for his summit performance, the event has not at this time proved to be a significant turning point in his presidency, despite the sharp criticism he received in the hours and days after the meeting and the multiple efforts by White House officials and the president to clarify his remarks in Helsinki. The poll results suggest that overall attitudes toward the president have hardened on both sides and that major events like Helsinki produce only modest changes in his overall standing, if any.

The Post-ABC poll conducted Wednesday through Friday finds that overall, 33 percent of Americans approve of Trump’s handling of his meeting with Putin while 50 percent disapprove. A sizable 18 percent say they have no opinion. A slightly larger 56 percent disapprove of Trump expressing doubts about U.S. intelligence agencies’ conclusion that Russia tried to influence the outcome of the 2016 election. On both questions, those who say they “strongly disapprove” of Trump’s performance outnumber those who say they “strongly approve” by better than 2 to 1.

Trump’s ratings for handling the summit represent a weakened moment for him, but they are not markedly worse than ratings of his presidency overall in other recent polls. A Washington Post-Schar School poll earlier this month, for instance, found 43 percent approved of Trump’s job performance while 55 percent disapproved, with strong disapproval outpacing strong approval by roughly 2 to 1.

The new Post-ABC poll finds 40 percent saying Trump went “too far” in supporting Putin, a criticism that was voiced by both Democrats and Republicans in Washington over the past week.

However, almost as many — 35 percent — say Trump handled Putin “about right,” while another 15 percent say he did not go far enough to support Putin. The rest have no opinion. Democrats, liberals and college graduates are the only groups in the poll among whom a majority say Trump went too far in supporting Putin.

On a broader question dealing with American leadership in the world, the results are similarly bad for the President:

Another poll from NBC News and The Wall Street Journal that was taken both before and after the Helsinki Summit provides some similar numbers:

In the poll — half of which was conducted before and the day of Trump’s July 16 news conference in Helsinki with Putin, the other half afterward — just 26 percent approve of the president’s handling of the relationship between the United States and Russia. Fifty-one percent disapprove.

Not surprisingly, Republicans are more supportive of Trump’s handling of Russia (53 percent of them approve) than Democrats (6 percent) and even Independents (14 percent) are.

“I think he is trying to build relations with Russia so that we do not have a war,” said Republican respondent Frank Garrido of Florida when asked to describe his reaction to Trump’s meetings with NATO allies and Russia’s Putin. “It is better to talk to [Putin] than to not. I think the Democrats are just maniacs.”

IndependentDeborah Linzy of Arkansas had a counter view, saying, “I think [Trump] was — for lack of a better word — disrespectful to the NATO allies and much too friendly with Putin. I do not consider Russia an ally.”

Also what hasn’t budged in the NBC/WSJ poll are general attitudes about special counsel Robert Mueller’s investigation into Russia’s involvement in the 2016 election — even after Mueller’s July 13 indictments against 12 Russian intelligence officials.

A plurality of voters — 46 percent — believe Mueller’s investigation should continue, versus 38 percent who think it should come to an end. Those numbers are essentially unchanged from last month, with most Democrats wanting it to continue, and with most Republicans preferring it to end.

Twenty-eight percent of all voters view Mueller positively, including 49 percent of Democrats but just 9 percent of Republicans.

That’s compared with 22 percent of all voters who see Mueller in a negative light, including 38 percent of Republicans but only 9 percent of Democrats.

Both of these polls were taken in the immediate aftermath of the Helsinki debacle and therefore arguably do not include a full evaluation by the public of just what kind of the impact the events of last week will have on public perception of the President’s handling of our relationship with our European allies, Russia, or foreign policy in general. Based on these numbers, though, it seems clear that the reviews are likely to be quite negative indeed. In that respect, of course, the President has nobody to blame but himself. He could have ensured that things turned out differently if he had stood up to Putin at the press conference last week, and if he had done something more than offer the ham-handed and utterly absurd explanation for his failure to do so other than what he has offered. For whatever reason, of course, he didn’t do so and he now finds himself in the predicament that he’s in, which includes actions that strengthen the impression that, for some reason, he is either unwilling or unable to stand up for his country against Russia even at the same time that he does everything that he can to ruin our relationships with long-standing allies as well as our standing in the world.

At the same time that we’re seeing these bad numbers from on the foreign policy side of Trump’s job, it’s worth noting that these events don’t seem to be having an impact on Trump’s overall job approval, at least not yet. For example, the same NBC/Wall Street Journal poll that gave such bad news for Trump regarding Russia also shows that his overall job approval is at 45% while disapproval is at 52%. Other current job approval polls are in roughly the same territory, and the RealClearPolitics average puts Trump’s job approval at 43.6% while his disapproval stands at 52.4% for a deficit of -8.8 points. This is at or near the best that Trump has polled since the early days of his Administration. One of the reasons for the President’s stronger numbers appears to be the state of the economy, something that can be seen in the fact that the RealClearPolitics average for job approval on the economy puts the President’s numbers at 50.7% and his disapproval at 41.9%, for a net positive of +8.8 points. By contrast, his approval when it comes to foreign policy stands at 41.7% approval and 51.0%, for a deficit of -9.3 points. Additionally, more detailed polling shows that Trump is likely being helped by the fact that he has overwhelming support from Republicans even while Democrats overwhelmingly disapprove and Independents disapprove of the President’s job performance by a margin of 36.5% approve to 54.7% disapprove. All of this suggests that Trump is likely to stay within the job approval range that he has been in for the better part of the past eighteen months as long as the economy remains in good shape and Republicans continue to rally to his side. What this means for the midterm elections and beyond remains to be seen.