New polling from the states has good news for Hillary Clinton, and an even less plausible path to 270 for Donald Trump.

The Hillary Clinton surge that we’ve noticed at the national level since the conventions concluded is starting to filter down to the states, and if this trend continues then things are going to become even more difficult for the Trump campaign and for Republicans in down ballot races.

First of all, coming out of the same group of battleground polls that included the Virginia survey I wrote about yesterday, we find that Donald Trump has the slimmest of leads in Arizona, a state that Republicans have won every year since 1952 with the exception of 1996, when Bill Clinton edged out a win over Bob Dole by 2.23%:

in Arizona, Trump leads 44 percent to 42 percent, only two points in a state Republicans typically win without too much trouble. Even if this is as close as Arizona ever gets (just 15 percent of those not voting for Clinton would still consider her) it nonetheless tells the story of a potentially shifting map, forcing Trump to defend usually-red territory, in part because of such strong Hispanic support behind Clinton. In Arizona, 80 percent of Hispanic voters feel they’re more motivated to vote this year than previous years, and don’t believe Donald Trump treats all people fairly.

Immigration is a large issue there as always – though not quite as large as terrorism and health care – and Republicans remain strongly in support of the idea of a border wall with Mexico. Eight in ten Republicans call it a good idea – though it is seen as a bad idea by relatively more independents and most Democrats. In Arizona, as elsewhere, Clinton is doing relatively better with those Democrats and has benefitted from a bit of crossover support, but many voters remain disappointed in their choices: thirty-two percent say they don’t like either of the two major-party candidates but are going to pick one anyway.

The controversy surrounding Donald Trump’s comments on the Khan familyappear to have hurt him with independents, but less so among Republicans. Republicans’ views on the matter are mixed in Arizona as elsewhere, with 45 percent of Republicans saying Trump’s response was appropriate and 29 percent inappropriate. Republicans in Arizona are more apt to say they like that Trump sticks up for himself, more generally, than to feel that he is insensitive when he criticizes others.

By way of comparison, Mitt Romney won Arizona by nine percentage points and John McCain won it by roughly the same amount.  This time, though, Arizona is appearing as though it could end up being a toss-up state headed into the election, something supported by the RealClearPolitics average for the state, which gives Trump a mere 0.3 point lead in a two-way race. There’s insufficient data from which to calculate an average for a four-way race because the CBS poll appears to be the first to ask the question, but it will be interesting to watch this state as time goes on. If Clinton manages to win here, then the race is over, although it’s likely that the race will be over in any case well before polls close in Arizona on Election Night. Even if she doesn’t win, the threat that a must-win red state for Trump might go Democratic means the GOP will be required to expend resources in a state that has been considered safe for some time now.

Heading over to neighboring Nevada, we find Hillary Clinton with a narrow lead in a state that has been something of a battleground since 2000:

In Nevada, Clinton leads, 43 percent to 41 percent, also bolstered by support from Hispanic voters and younger voters, but facing more difficulty with older, white voters. In Nevada, as elsewhere, the commander-in-chief measure nets Clinton a large advantage, even as she has lower numbers on measures such as bringing change.

RealClearPolitics gives Clinton a 2.3 point lead over Trump in this state, which Obama won in both in 2008 and 2012, after George W. Bush had won the state in each of his two successful elections, and which Bill Clinton had won in each of his. More recently, though, Republican success in statewide elections in 2010 and 2014 had raised hopes that the GOP could capture the state’s six Electoral Votes and that it could win the race for the Senate seat opened up by the retirement of Senator Harry Reid. In that race, Republican Congressman Joe Heck has a narrow lead in the poll average over his Democratic opponent. Not surprisingly, Heck has already taken steps to keep his distance from Donald Trump and has not offered his endorsement of his party’s nominee.

Finally, in Pennsylvania, which Democrats have won on the Presidential level every year since 1992 but which the Trump campaign has claimed as a state where they can win, a second post-convention poll shows Clinton leading by double digits:

HARRISBURG, Pa. (WHTM) – Hillary Clinton has a 10-point lead over Donald Trump among Pennsylvania voters, according to a poll conducted for ABC27 News.

The Susquehanna Polling & Research survey released Monday shows Clinton would receive 47 percent of the vote and Trump would get 37 percent if the election were held today. Seven percent of respondents were undecided.

Most voters had unfavorable opinions of both Clinton, 49-40 percent, and Trump, 57-35 percent.

A majority, 88 percent, said they are strongly supporting their candidate and 11 percent said they could change their mind before Election Day. Forty-one percent said the televised Presidential debates will influence their vote.

Sixty-one percent said they have more interest in this election than past Presidential elections.

Also coming out of Pennsylvania is a new poll from Quinnipiac, which shows Clinton leading by ten points and also includes numbers from Ohio and Florida:

Hillary Clinton has bounced to small leads over Donald Trump in Florida and Ohio and a double-digit edge in Pennsylvania, according to Quinnipiac University polls released Tuesday.

The polls — Quinnipiac’s first measures of “likely voters” this election cycle as opposed to all “registered voters” as it had in past surveys — show Clinton running neck-and-neck with Donald Trump in Florida, with the Democratic presidential nominee ahead 46 percent to 45 percent. Clinton’s lead is slightly larger in Ohio, with the former secretary of state ahead 49 percent to 45 percent. In Pennsylvania, Clinton leads by 10 points, 52 percent to 42 percent.

Clinton’s lead shrinks slightly when Gary Johnson and Jill Stein — nominees of the Libertarian Party and Green Party, respectively — are included, though neither third-party candidate earns more than 8 percent in any of the states. Clinton and Trump are tied at 43 percent in Florida on a four-way ballot, and Clinton leads by 2 points in Ohio and 9 points in Pennsylvania.

Quinnipiac said in a news release that the new polls should not be compared with previous surveys of all registered voters, but it is worth noting that its past polls had been more positive for Trump than other surveys. Last month, Quinnipiac found Trump ahead in both Florida and Pennsylvania among registered voters, and the two candidates deadlocked in Ohio.

As I’ve noted before, Pennsylvania is allegedly part of the Trump campaign’s strategy to target the industrial Midwest as an alternative path to victory notwithstanding the fact that it includes states such as Pennsylvania, Michigan, and Wisconsin that have been consistently Democratic in Presidential elections for twenty years or longer. With this poll, though Clinton now has an 8.8 point lead in the state in a head-to-head race and in a four-way race that includes Gary Johnson and Jill Stein. Absent a big change, it would appear that the Keystone State is out of reach for the GOP again this year, and that Trump’s Midwest strategy is little more than a fantasy. In Ohio, these numbers give Clinton a 1.6 point average lead in a two-person race and an average2.0 point lead in a four way race in the RealClearPolitics average. In Florida’s average for Florida, the new poll gives Clinton a 2.2 point average lead over Trump in a two-way race in the Sunshine State, and a 1.6 point lead in a four-way race.

With all that said, here’s where things stand based on the latest polls, supplemented somewhat by my own education projections. The lighter colored blue and red states should be taken as “Leaning” toward the respective parties. The gray states are pure toss-ups at this point, and demonstrate just how small the battleground appears to be this year. Indeed, Clinton could lose all the toss-ups on this map and still win the election easily: 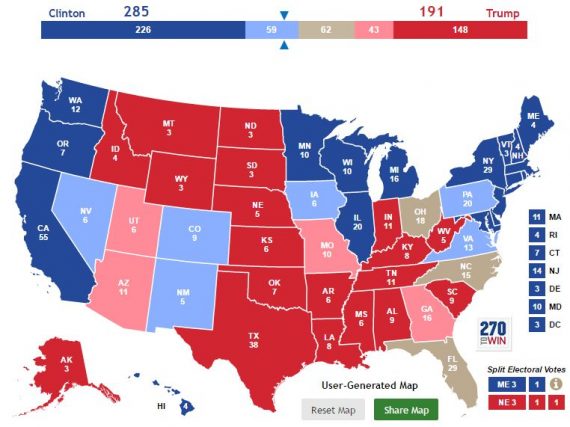 Obviously, there’s a lot of time left between now and November for things to change, but as things stand right now this is Hillary Clinton’s race to lose and Donald Trump’s path to victory appears to be becoming narrower every day.

Update: After this post went live, NBC News released its own set of battleground polls that are largely consistent with the numbers above: