Obama’s Approval Numbers Down, But He Still Leads All GOP Rivals

President Obama is vulnerable, but he's facing a GOP field that is underwhelming even for Republicans. 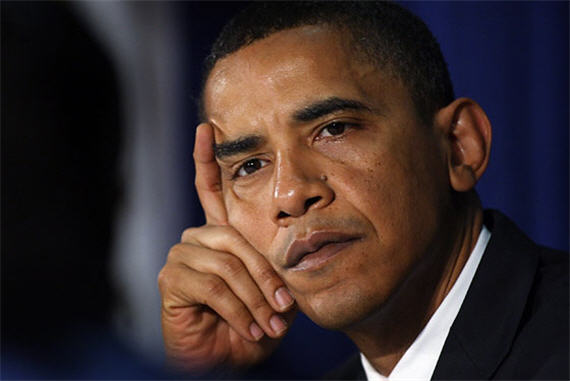 President Obama’s approval numbers are down in a new ABC News/Washington Post poll, but he’s still leading all of his potential GOP rivals in head-to-head matchups:

Deepening economic pessimism has pushed down President Obama’s approval rating to a near record low, but he holds an early advantage over prospective 2012 rivals in part because of widespread dissatisfaction with Republican candidates, according to a new Washington Post-ABC News poll.

In the survey, 47 percent approve of the job Obama is doing, down seven points since January. Half of all Americans disapprove of his job performance, with 37 percent saying they “strongly disapprove,” nearly matching the worst level of his presidency.

Driving the downward movement in Obama’s standing are renewed concerns about the economy and fresh worry about rising prices, particularly for gasoline. Despite signs of economic growth, 44 percent of Americans see the economy as getting worse, the highest percentage to say so in more than two years.

Obama remains most imperiled, and Republicans best assisted, by the public’s long-running — and now heightened — economic discontent. Forty-four percent say the economy’s getting worse, the most since March 2009; these pessimists (disproportionately Republicans) favor any of the possible GOP candidates for president over Obama by double digits.

Beyond the economy overall, and despite declining unemployment, more say the availability of jobs in their area is getting worse (37 percent) than better (26 percent). And most striking is the weight of rising prices: Seventy-eight percent of Americans say inflation is getting worse in their area, and nearly as many, 71 percent, continue to say the rising price of gasoline is causing them financial hardship (“serious” hardship for more than four in 10).

As noted, 57 percent now disapprove of Obama’s handling of the economy, matching the most of his career; 46 percent “strongly” disapprove, a new high and double the number of strong approvers. Overall disapproval of Obama’s work on the economy has risen by 6 percentage points since January, shortly before improved economic views were hammered down by this year’s steep, 74-cent run-up in gas prices.

In fact, the President’s job approval on the economy alone has gotten steadily worse since roughly December 2009: 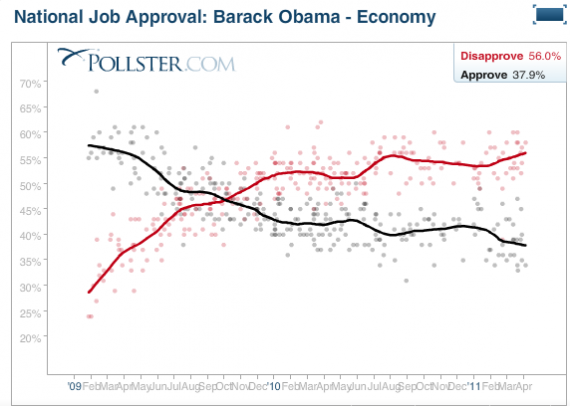 So clearly, the President is vulnerable and his fate between now and November 2012 will, largely, depend on the state of the economy. At the same time, though, the GOP will have to come up with a candidate that can win nationwide, and right now there really only appear to be two of them:

In a head-to-head matchup among all adults, Obama leads Trump by 12 points, 52-40 percent; Rep. Michele Bachmann of Minnesota by an identical 12 points; former Minnesota Gov. Tim Pawlenty and former House Speaker Newt Gingrich by 15 points each; and Palin by 17. Closer, as noted, are Huckabee, who trails Obama by 50-44 percent; and Romney, who comes within a scant 4 points, with 45 percent to Obama’s 49.

Notably, both Romney and Huckabee move numerically ahead of Obama, by 49-44 percent and 48-45 percent, respectively, among independents, the quintessential swing voters in national elections. All other Republicans tested in this poll trail Obama among independents.

Romney outperforms other potential GOP candidates in higher-income brackets, leading Obama by 11 points among people in $100,000-plus households, a group in which Obama ran evenly against McCain in 2008.

And it is, of course, among Independents that Obama’s approval numbers have changed the most: 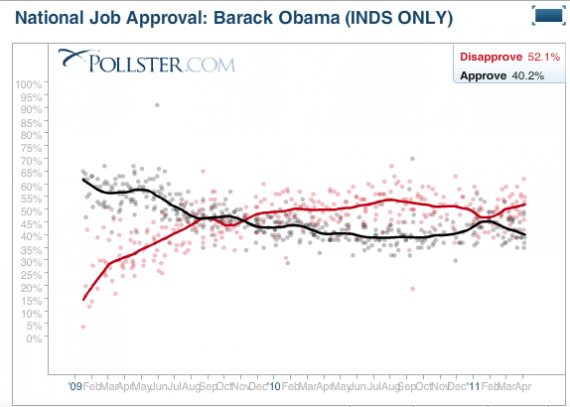 As long as they nominate the right candidate, then, Republicans seem pretty well positioned for 2012, the problem is they aren’t really happy with their choices:

Less than half of all Republicans in a new Washington Post-ABC News poll are satisfied with their choices in the 2012 presidential field — numbers that run well behind the 2008 race and suggests the 2012 race remains ripe for a late entry.

Just 43 percent proclaimed themselves satisfied with their options, a far cry from the 65 percent who said the same at this time in the 2008 race.

The lack of GOP enthusiasm was evident in other portions of the poll, too. In a hypothetical Republican primary ballot, former Massachusetts governor Mitt Romney led the way with 16 percent, followed by “no one/not any of them” at 12 percent. (Unlike some other polls, the question was asked open-ended, meaning no names were given to respondents.)

Outside of Romney, no candidate wins double-digit support. And, the next three top finishers are celebrity Donald Trump, former Arkansas governor Mike Huckabee and former Alaska governor Sarah Palin — none of whom are sure things to ultimately run. (Trump’s rise, in and of itself, is a testament to the dissatisfaction with the GOP options.)

If all three take a pass — a totally plausible scenario — another 20 percent of GOP voters will be without their preferred candidate, further adding to the fluidity of the field.

Put simply: The opportunity is ripe for someone with the fiscally conservative focus of an Indiana Gov. Mitch Daniels or, less likely, New Jersey Gov. Chris Christie, to get into the race and immediately begin winning over Republicans dissatisfied with their current options.

Christie has said repeatedly that he isn’t running, in a manner that would make it next to impossible for him to walk those comments back, so I don’t think there’s any realistic possibility of him getting into the race. Daniels is another story, though. He’s clearly been flirting with the idea, and we may hear something from him after the Indiana Legislature goes into recess at the end of this month. He wouldn’t look like a particularly strong candidate against Obama in the beginning, largely because of a lack of name recognition, but he strikes me as the kind of candidate that could rise about the celebrity candidates and the also-rans to become a contender fairly quickly.

There are, as always caveats regarding polling, and Ed Morrissey points out that the ABC/WaPo poll has been suffering from a seemingly skewed sample for some time now:

In January, when the WaPo/ABC survey gave Obama a 54% approval rating, it came from a sample with a 10-point edge for Democrats, with a D/R/I of 33/23/38.  Their pollster apparently never bothered to pay attention to Gallup or Rasmussen on party affiliation, both of whom show dead heats between the two parties, with Rasmussen showing a slight edge to Democrats this month, 35.3% to 34.0%.  Today’s WaPo/ABC sample is just as ludicrous as last December at 32/22/41, which I’d remind people is three points wider than Barack Obama’s popular-vote margin of victory in 2008 — and that included independents and crossover Republicans.

The sample should certainly cause one to question the numbers in the poll. However, the overall trends are consistent with other polling, and the results in the head-to-head matchups largely match what we’ve seen from other polling.

So, the takeway here is fairly straight forward. Barack Obama remains vulnerable, especially if the economy weakens (or, just as importantly, the public continues to believe that the economy is weak). At the same time, though, the GOP is unhappy with their Presidential field to an extent that mirrors the situation before the 1996 election, when the nomination ended up going to Bob Dole by default and the GOP handed victory to Bill Clinton on a silver platter. Could Republicans make the same mistake again? It’s certainly possible.