The Occupy Wall Street protests look more like a temper tantrum than a substantive protest movement. 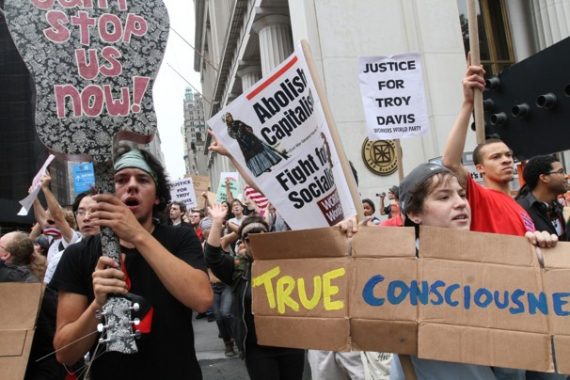 Ezra Klein points this morning to a Tumblr account called “We Are The 99 Percent” purporting to tell the stories of people taking part in the Occupy Wall Street protests, or at least supporting it from a distance. Klein says that it was reading through this website that convinced him that this was a story worth covering:

These are not rants against the system. They’re not anarchist manifestos. They’re not calls for a revolution. They’re small stories of people who played by the rules, did what they were told, and now have nothing to show for it. Or, worse, they have tens of thousands in debt to show for it.

So, let’s take a look at some of the “grievances” that convinced Klein:

“I am young. I am educated and hard working. I am not able to pay my bills. I am afraid of what the future holds.”

“i am a 19 year old student with 18 credit hours and 2 part time jobs. i am over 4000 dollars in debt but my paychecks are just enough to get me to school and back. next year my plan was to attend a 4 year college and get my bfa, but now i am afraid that without a co-signer i will have no shot at a loan and even if i can get a loan i am afraid that i will leave college with no future and a crippling debt.”

“i am a 19 year old student with 18 credit hours and 2 part time jobs. i am over 4000 dollars in debt but my paychecks are just enough to get me to school and back. next year my plan was to attend a 4 year college and get my bfa, but now i am afraid that without a co-signer i will have no shot at a loan and even if i can get a loan i am afraid that i will leave college with no future and a crippling debt.”

The first thought I had when I looked through the Tumblr account is that these people can’t be doing all that bad if they’ve got access to the internet and a computer with a webcam necessary to create the posting that they put up at Tumblr. In any event, though, what strikes me more than anything else is that alot of these people are frustrated 20-somethings who have gotten out of college and found that the road to the good life isn’t quite as smooth as they thought it would be. Of course, things are more difficult today than they were ten years ago but that doesn’t mean they were easy back then. Establishing yourself in life is always a challenge, especially if you run up tens of thousands of dollars in student loan debt without really thinking about how you’re going to pay it off.

What comes across to me the most, though, is a sense of entitlement from some people and they idea that the situation they’re in clearly can’t be their fault so it must be the blame of someone else. There’s an attitude about the protests that there is something morally wrong about the fact that not everyone is suffering equally in the current economy as well. So when they look up and see that some people have managed to succeed during these rough economic times, that sense of entitlement becomes intermingled with a sense of envy and the belief that the only way these other people could have succeeded is by cheating. As a result these protester blame their situation on someone else, blare out largely incoherent slogans, and engage in a protest that has no discernible purpose.

As one writer at The Economist’s Democracy in America blog notes, these are the same people who have, for the most part, separated themselves from the political process:

Many of these aggrieved youth believe that the government has become unresponsive, that their voices have been silenced, and therefore protest is the only option. But this strikes me as a fundamental misreading of the past three years. It is likely that few of the protesters have actually taken part in the more mundane aspects of the system they’d like to take down—for example, only 24% of 18- to 29-year-olds voted in the 2010 mid-term elections. And while they were quietly seething, the tea-party movement was showing America what democracy actually looks like, pushing their candidates forward and holding them accountable. When liberals complain that the Republicans are beholden to the tea-party movement, is that not an admission that the system is responsive?

Some on the left have already started the claim that “Occupy Wall Street” is a left-wing Tea Party, but in order for that work they have to actually be involved in the system. More importantly, though, it’s fundamentally clear that these protesters are directing their anger in the wrong direction. It wasn’t Wall Street that created easy-to-get student loans and gave young people and incentive to apply for them, the government did that. It wasn’t Wall Street that has made college tuition so absurdly high that four years of student loans ends up creating a crushing debt load, for the most part government did that too. It wasn’t Wall Street that created the monetary conditions that made the Housing bubble possible and used Fannie Mae and Freedie Mac to encourage banks to give out loans to people who shouldn’t have gotten them, government did that. It’s not Wall Street that is saddling their generation with a crushing National Debt and an entitlement system that is unsustainable in its current form, government is doing that. A protest on Wall Street is not going to fix any of these problems. Heck, any kind of protest isn’t going to fix any of these problems. You want to have your voice heard, then you need to get involved in the system not hang out in some park in Lower Manhattan.

The other thing that is missing from the laments of the “99%-ers” is personal responsibility. Running up huge student loan debts getting a Bachelor of Fine Arts degree and then complaining when you can’t find a job to pay them off, like this woman does, doesn’t strike me as very responsible. Even in a good economy, you’re going to find more people with B.FA.’s waiting tables at the local bar than giving tours at some museum somewhere. There just isn’t much demand for that kind of work, and it doesn’t really pay well. That’s how our economy works. Switch your major to something useful, like chemistry, or biology, or engineering, and you’re likely to find your job prospects just a little bit better, even when the economy is slow. When you make choices that put you in a bad situation, the person to blame isn’t the broker on Wall Street, it’s man or woman in the mirror.

There’s something pretty immature about blaming other people for your situation in life. There’s no question that the incestuous relationship between business and government is a bad thing, that’s why I’ve said repeatedly that the answer is to get the government out of those situations where it is entering into “partnerships” with business and picking winners and losers through direct and indirect subsidies. Those are the situations in which business is indeed taking advantage of taxpayers and it ought to be stopped, but to a large degree that won’t happen unless and until we drastically reduce the size and scope of government involvement in the economy.

The Occupy Wall Street crowd isn’t asking for that, though. To the extent they’re asking for anything, they’re clearly asking for more government involvement in the economy. They want what they think they’re entitled to, which apparently includes a job and forgiveness of all their student debt. Their main priority seems to be taking from one group and giving to another, but what they don’t realize is that all the government will do is take from one politically disfavored group and give to another, politically favored, group, thus creating an entirely new group of “others.” Moreover, from a moral point of view, taxing the rich to help pay down the deficit is one thing, taking from the rich and giving to another group is quite another. One is, as Oliver Wendell Holmes Jr put it, the price of civilization. The other is nothing more than naked theft fueled by resentment and envy. If that’s the agenda the Occupy Wall Street crowd wants people to sign up for, then count me out