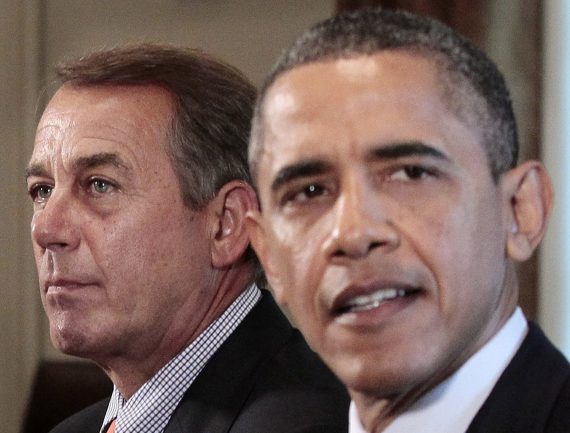 A very interesting report from the National Journal about the current state of the negotiations between the White House and the House GOP:

The White House and House Republican leaders are discussing a large deal to raise the debt ceiling that would include about $3 trillion in deficit cuts over 10 years, according to several congressional aides.

The aides, who declined to be named because they weren’t authorized to speak publicly, said the proposal’s outline is broadly similar to a plan discussed previously by President Obama and House Speaker John Boehner, R-Ohio, and a “Gang of Six” proposal to cut about $3.7 trillion in a decade, with the major exception that it would not raise significant tax revenue. The gang proposal, by contrast, would seek $1 trillion of its deficit cuts from new tax revenue.

A White House official who asked not to be identified said progress was being made in the discussions. But the official declined to provide any details, deferring to Boehner’s ongoing presentations to House Republicans as he works to determine whether he can garner the necessary support for passage.

As described, the plan would be a major, and unexpected, concession to congressional Republicans. The lack of immediate tax revenue would be a nonstarter for many Democrats in Congress, endangering its prospects in the Senate in particular. The mere fact the deal is under discussion already has Democrats up in arms. Democratic lawmakers ripped the proposal after Office of Management and Budget Director Jacob Lew briefed them at a Caucus meeting on Thursday.

“You can’t ask us to vote when we haven’t been part of the deal,” Mikulski said.

There are similar reports about the possible deal in The Hufffington Post, Talking Points Memo, Politico, The New York Times, and The Washington Post.

If this sounds familiar, there’s a reason. This is almost exactly the same manner in which the deal to extend the Bush tax cuts, and long-term unemployment benefits, was made back in December; the President compeltely bypassed House and Senate Democrats and struck a deal directly with the GOP that many Democrats found objectionable. Despite threats, the lame duck Congress ended up passing the tax cut extension. It was clear, though, that many on the left had a bitter taste in their mouths as the Christmas holidays approached.

It should come as no surprise, then, that the left-side of the blogosphere is already in a tizzy over this possible deal. Daily Kos calls it “a complete cave – and an epic one at that.” Lawyers, Guns & Money called the possible deal “exasperating.”

Assuming that the broad outlines of the deal remain as reported, I’m sure we’ll hear more outrage from the left. As in December, though, I’m not sure Obama is all that concerned about it. His path to the Democratic nomination is secure, and it’s not like these people are going to vote for Mitt Romney or something.

The Iran Nuclear Deal Debate Is Basically Over