A significant and important development in the Russia investigation that shows that President Trump's claim that the stories of Russian interference in the 2016 election were "Fake News" is completely untrue. 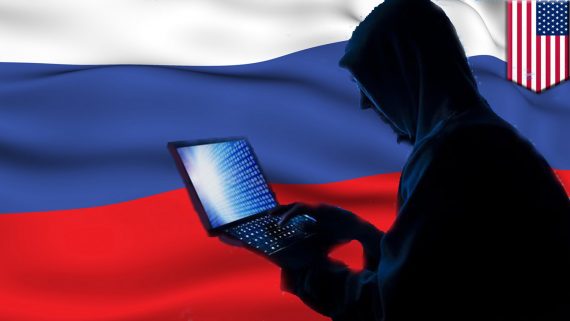 Special Counsel Robert Mueller has made public an indictment of thirteen Russian individuals, along with a business organization tied to the Russian government, in connection with a campaign to interfere in the 2016 Presidential election:

The Justice Department’s special counsel announced the indictment Friday of a notorious Russian troll farm — charging 13 individuals who allegedly were involved in a scheme to criminally interfere with the 2016 U.S. presidential election.

The Internet Research Agency, which is based in St. Petersburg, Russia, was named in the indictment.

“From in or around 2014 to the present, defendants knowingly and intentionally conspired with each other (and with persons known and unknown to the grand jury) to defraud the United States by impairing, obstructing, and defeating the lawful functions of the government through fraud and deceit for the purpose of interfering with the U.S. political and electoral processes, including the presidential election of 2016,” the indictment states.

The indictment charges that some of the Russian suspects traveled to the United States to gather information to help in the scheme, and that they also impersonated Americans online in order to try to sway voters’ opinions. None of those charged are in custody, according to Peter Carr, a spokesman for the special counsel’s office.

The grand jury charges that some of those suspects interacted with Americans associated with the Trump campaign, but those Trump associates did not realize they were being manipulated.

Some of the Russians posed as U.S. persons and, without revealing their Russian identities, “communicated with unwitting individuals associated with the Trump campaign and with other political activists to seek to coordinate political activities,” the indictment said.

By February 2016, the suspects had decided whom they were supporting in the 2016 race. According to the indictment, Internet Research Agency specialists were instructed to “use any opportunity to criticize Hillary and the rest (except Sanders and Trump — we support them.)”

Prosecutors say some Russian employees of the troll farm were chastised in September 2016 when they had a “low number of posts dedicated to criticizing Hillary Clinton” and were told it was “imperative to intensify criticizing” the Democratic nominee in future posts.

The charges include conspiracy to defraud the United States, conspiracy to commit wire fraud and bank fraud, and aggravated identity theft.

One of those indicted is Yevgeniy Viktorovich Prigozhin, who has long been identified in the Russian media as the financial backer of the Internet Research Agency. He is a caterer who has been nicknamed “Putin’s chef” because of his close ties to the Russian president. Concord Consulting and Concord Catering, two Russian businesses also charged by Mueller’s team Friday, have previously been identified as Prigozhin vehicles.

The Internet Research Agency was at the center of Silicon Valley’s investigation into Russian meddling during the 2016 presidential election. Facebook, Twitter, Instagram and Google all found evidence that the private firm used social media to divide American voters across a range of polarizing issues, including race, religion, gun rights and immigration.

Tweets and Facebook posts that have been made public as part of these investigations make clear that the Russian disinformation effort broadly sought to favor Republican Donald Trump and undermine the support for Democrat Hillary Clinton. This conclusion has been backed by the work of several independent researchers.

Typically called a “troll farm,” the Internet Research Agency is regarded as the most prominent part of the Russian disinformation campaign, though congressional investigators pushed for evidence of other operations, including from countries other than Russia, that shared the same purpose.

The New York Times has more:

The indictment represents the first charges by the special counsel, Robert S. Mueller III, for meddling in the 2016 presidential election — the fundamental crime that he was assigned to investigate.

In a 37-page indictment filed in United States District Court, Mr. Mueller said that the 13 individuals have conspired since 2014 to violate laws that prohibit foreigners from spending money to influence federal elections in the United States.

The indictment charges that the foreigners falsely posed as American citizens, stole identities and otherwise engaged in fraud and deceit in an effort to influence the U.S. political process, including the 2016 presidential race.

Though the Russians are unlikely to be immediately arrested, they are now wanted by the United States government, which will make it hard for them to travel or do business internationally.

The Internet Research Agency, operating out of St. Petersburg, was described in the indictment as a hub for a sophisticated operation designed to reach millions of Americans to disrupt the political process in the United States. Its annual budget was millions of dollars; its stated goal was to “spread distrust toward the candidates and the political system in general.”

While this indictment does not directly implicate Donald Trump, the Trump campaign, or anyone associated with that campaign in any kind of conspiracy, it does specifically state that officials close to the campaign were at the very least used “unwittingly” to help spread false information about the Democratic National Committee, former Secretary of State Hillary Clinton, and Senator Bernie Sanders in an effort to influence the outcome of the Presidential election. In so doing, the indictment confirms something that we’ve known for at least a year and a half now, and which has been repeatedly confirmed by the heads of America’s intelligence agencies, namely the fact that Russia was indeed interfering in the 2016 election and that, from at least the middle of 2016 forward, they were doing so to benefit the campaign of Donald Trump and harm the campaign of former Secretary of State Clinton. As such, it stands as what seems to be a complete refutation of the President’s claim that the entire story of Russian interference is untrue and what he has repeatedly called “Fake News” and which he has consistently attempted to undermine over the course of the past year.

Instead of being “Fake News,” we can see from the indictment that this was a well-organized campaign that began as far back as 2014 and involved on the ground research and the use of social media accounts to spread false news, with a particular concentration on states and areas where it would potentially make a difference. This included efforts to suppress the vote in certain parts of the country and to increase the vote in others, all with the goal of stirring chaos and, eventually, the seemingly conscious effort to assist the campaign of President Trump. The indictment also shows that the Russian agents involved were in contact with grassroots organizations and even campaign officials of the Trump campaign who they were attempting to use to spread disinformation about the Clinton campaign and Hillary Clinton herself. Much of this was apparently accomplished via the use of social media accounts on Twitter and Facebook, including accounts that were specifically supportive of Trump and the Trump campaign specifically and the Republican Party specifically. It’s important to note that this indictment does not name any members of the Trump campaign, nor does it specifically state that any named or unnamed Trump campaign officials were involved in any collusion effort. Nonetheless, the fact that the indictment at the very least hints at that possibility and leaves open the possibility of future indictments that could establish just that possibility.

Perhaps the most significant fact about today’s development is the fact that the formal indictment was announced in a brief statement made by Deputy Attorney General Rod Rosenstein, who has been the lead supervisor of the Russia investigation since Attorney General Jeff Sessions recused himself. It’s also important to note that Rosenstein did not say that there is no evidence of collusion, he merely stated that there was no allegation of collusion in this indictment. That does not preclude the possibility of future indictments related to collusion and/or obstruction of justice. It was Rosenstein, of course, who appointed Robert Mueller as special counsel and who has been a rumored target of Trump’s for firing as part of his apparent effort to undermine the investigation. This is a strong indication of the fact that, while the indictment is signed by Mueller, Rosenstein has signed off on that indictment and is willing to stand up for it going forward. Politically at least, this is going to make it harder for Trump to make an effort to fire either Rosenstein or Mueller without subjecting himself to even further charges that he is seeking to obstruct the administration of justice.

Realistically, of course, there is no chance that the named individuals, all of whom are now apparently in Russia itself, will ever actually see the inside of an American courtroom. Notwithstanding that fact, though, this indictment is a strong signal of the progress that Mueller’s investigation has made over the course of the past year, and an indication of the fact that the investigation itself is far from over. Indeed, it’s likely just beginning.

Here’s the indictment itself: