A day of terror at a school in Pakistan. 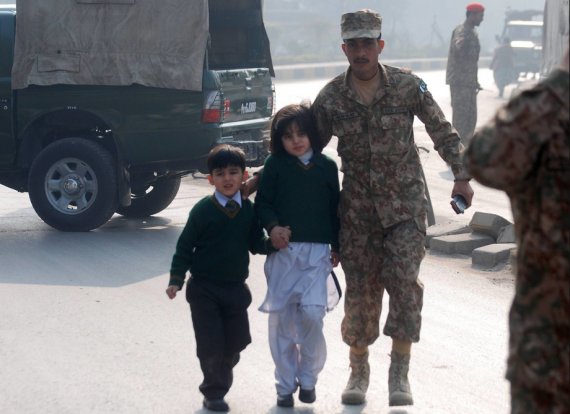 A Taliban attack on a military school has resulted in the death of more than 100 people, many of them children:

ISLAMABAD, Pakistan — In one of Pakistan’s bloodiest attacks in recent years, scores of people were killed after a group of Talibangunmen stormed a school in northwestern Pakistan, officials and rescue workers said on Tuesday. Hundreds of students remained trapped inside the compound as security forces exchanged fire with the gunmen, officials said.

The toll of dead and injured remained uncertain, but the local news media, citing government officials and hospitals, reported 126 dead, more than 100 of them children. The army press office announced that five attackers had been killed.

The siege started Tuesday morning around 10 a.m. when at least five to six heavily armed Taliban gunmen entered Army Public School and Degree College in Peshawar, the capital of Khyber Pakhtunkhwa Province. According to initial reports, the gunmen opened fire on students and have taken dozens of them as hostages. Some students managed to escape the school compound, the local news media reported.

The gunmen entered after scaling a wall at the rear of the main school building. They opened fire and took dozens of students hostage in the main auditorium of the building, the news media reported.

Local television news networks broadcast images of panic-stricken students, wearing the school uniform of green sweaters and blazers, being evacuated from the compound. The wounded have been taken to Lady Reading Hospital in Peshawar, where a state of emergency has been declared.

Prime Minister Nawaz Sharif has left the capital, Islamabad, for Peshawar, the state-run news media reported, saying he would personally supervise the operation against the militants.

A spokesman for the Pakistani Taliban claimed responsibility for the attack and said that it was in retaliation to the military’s offensive against militant hide-outs in the North Waziristan tribal region. The Pakistani military carried out an offensive, known as Operation Zarb-e-Azb, in June and has claimed to have cleared 90 percent of the restive region that has long been a redoubt of local and foreign militants.

As the news of the attack spread, distraught parents rushed toward the school and to hospitals. The school has been cordoned off by security forces, and there were reports of heavy gunfire as military commandos and troops battled with the militants inside.

By the afternoon, three blocs of the school had been cleared, while the remaining parts were being cleared, a military spokesman said. There were unconfirmed news reports that at least three gunmen had been killed, as well as a suicide bomber who had detonated his explosives.

The attack comes at a time of intense political strife in Pakistan. The opposition politician Imran Khan, who controls Khyber Pakhtunkhwa Province, has been staging protest rallies in major cities. Mr. Khan claims that the general elections of 2013 were rigged and is now demanding a judicial investigation.

More from the BBC:

At least 126 people, mostly children, have been killed in a Taliban assault on an army-run school in the Pakistani city of Peshawar, officials say.

All six of the militants who entered the building are said to have been killed, at least one of them in a suicide blast.

However, the army has not declared the operation over. Most of the 500 students have been evacuated.

The attack is being seen as one of the worst so far in Pakistan.

The BBC’s Shahzeb Jillani in Karachi says the militants appear to have been intent on killing as many students as possible – rather than taking hostages, as initially thought.

Thousands of Pakistanis have been killed in militant violence in recent years – but the latest attack has caused unprecedented shock.

A spokesman for the militants told BBC Urdu that the school had been targeted in response to army operations.

Hundreds of Taliban fighters are thought to have died in a recent military offensive in North Waziristan and the nearby Khyber area.

Many of the casualties at the Army Public School were reportedly caused by the suicide blast. More than 100 of the dead were children, a local official told Reuters news agency.

Irshadah Bibi, a woman who lost her 12-year-old son, was seen beating her face in grief, throwing herself against an ambulance.

“O God, why did you snatch away my son?” AFP news agency quotes her as saying.

The attack started at 10:00 local time (05:00 GMT). Mudassir Awan, a worker at the school, said he had seen six people scaling its walls.

“We thought it must be the children playing some game,” he told Reuters news agency. “But then we saw a lot of firearms with them.

“As soon as the firing started, we ran to our classrooms,” he said. “They were entering every class and they were killing the children.”

Eyewitnesses told Geo TV station that the attackers had entered the school auditorium, where a military team was conducting first-aid training for students.

Locals reported hearing the screams of students and teachers. The dead are said to also include teachers and a paramilitary soldier.

Gunfire and explosions were heard as security forces hunted down the militants.

Events in Pakistan have been quiet as of late, at least in the Western media, but this certainly brings back to the forefront the fact that, notwithstanding 13 years of war in neighboring Afghanistan during which the Taliban and its supporters have often been chased across the border into Pakistan and the government there has done what it can to deal with that threat, the Taliban remains a powerful force on both sides of the border. Pakistan, meanwhile, has festered as well due in no small part to its own political problems and resentment toward and conflict with the United States over the conduct of counter-terrorist operations. To no small degree, it has often seemed as though the Pakistani Taliban has been allowed to flourish due both to incompetence on the part of the leadership in Islamabad and corruption that has led to protection for forces that are clearly long-term threats to the central government. Whether an event like this leads to changes in Pakistan, which its worth remembering is a nuclear power, remains to be seen. However, just as the wisest choice in predicting the future of Afghanistan revolves around pessimism, the same seems to be true about its neighbor to the south, and that could be a much bigger problem for the world.

Given the nature of the attack and the fact that children make up a majority of the victims, of course, one expects that the response from Pakistan will be swift and brutal. It strikes me, though, that the Pakistani Taliban are well aware of this possibility and may well be prepared for it already. As noted, much like their Afghan cousins, these appear to be well-organized fighters rather than strike and retreat terrorists so one imagines that they could put up quite a fight even against a well-trained Pakistani force. Additionally, a brutal Pakistani response is likely exactly what this attack is intended to provoke since it would seem to tend to reinforce the propaganda that the Taliban uses to recruit fighters and maintain the support of ethnic tribes that are already at odds with the central government for other reasons. Doubling down on the very strategy that provoked the attack, then, could end up be self-defeating. In all honestly, though, I’m not sure what other option the Pakistanis have after something like this.