Ted Cruz pulled off a win in Wisconsin, giving some hope to the "Stop Trump" crowd. 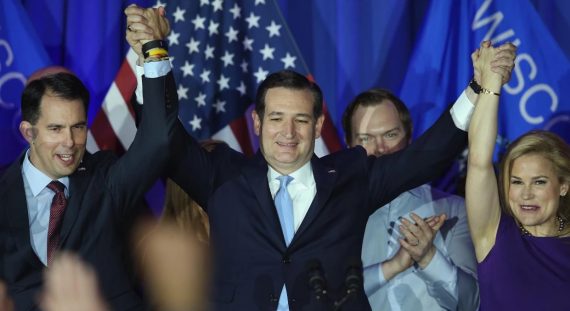 For the better part of the past week, most of the polling in Wisconsin indicated that Ted Cruz was headed for a victory in Wisconsin’s primary over Donald Trump. To a large degree, this seemed to be due to the fact that Donald Trump has spent the last two weeks or so shooting himself in the foot with attacks on Ted Cruz’s wife, comments about abortion that put him to the right of Mike Huckabee at one point, and assertions about NATO and the use of nuclear weapons that raised real concerns about his foreign policy bona fides. Trump also ran up against the fact that much of the Wisconsin State Republican elite, led by Governor Scott Walker as well as influential talk radio hosts such as Milwaukee based Charlie Sykes, were committed to the idea of supporting the candidate most likely to block Trump from getting a majority of the delegates prior to the Republican Convention in Cleveland. The result was a bigger win for Cruz than even the polling had been anticipating:

Senator Ted Cruz soundly defeated Donald J. Trump in the Wisconsin primary on Tuesday, breathing new life into efforts to halt Mr. Trump’s divisive presidential candidacy and dealing a blow to his chances of clinching the Republican nomination before the party’s summer convention.

With more than 80 percent of precincts reporting, Mr. Cruz had received 48 percent of the vote to 34 percent for Mr. Trump. Gov. John Kasich of Ohio was a distant third with 14 percent.

Mr. Trump’s loss was his most significant setback since Mr. Cruz narrowly defeated him in Iowa, the campaign’s first nominating contest. And after largely dominating the Republican field from the moment he announced his candidacy last June, Mr. Trump now faces a fresh challenge: bouncing back in the face of searing attack ads by Republicans bent on stopping him, questions about his demeanor and campaign organization, and a single ascendant challenger in Mr. Cruz.

In winning Wisconsin so convincingly, Mr. Cruz, of Texas, showed he was capable of appealing to more than just the hard-line and religious conservative Republicans who have been the foundation of his campaign.

“Tonight is a turning point,” he told cheering supporters in Milwaukee. “It is a rallying cry. It is a call from the hard-working men and women of Wisconsin to the people of America: We have a choice, a real choice.”

But Mr. Cruz faces daunting tasks. One is consolidating the anti-Trump vote. Another is capturing more moderate Republicans in a series of primaries in Northeastern states that are likely to be favorable territory for Mr. Trump, beginning with New York on April 19.

While Mr. Trump handily won among Wisconsin moderates, exit polls showed, Mr. Cruz and Mr. Kasich received roughly equal support in that group. Mr. Cruz not only took nearly two-thirds of “very conservative” voters, he also won among voters who called themselves only “somewhat conservative.”Notably, Mr. Cruz also won among those who did not call themselves born-again Christians — a group with which he has struggled in earlier contests.

Voters who made their decisions late once again broke sharply against Mr. Trump, who sustained a series of self-inflicted wounds in the last week: A third of voters settled on a candidate over that period, and of those, 46 percent said they backed Mr. Cruz. Only 29 percent embraced Mr. Trump.

Most striking was how many Wisconsin primary voters still harbored deep discomfort with Mr. Trump despite his wide lead in the race for delegates. In exit polls, 58 percent said they would be “concerned” or “scared” if he were elected, higher than the other two Republican hopefuls. And 37 percent of those who voted in the Republican primary said they would support Hillary Clinton, a third-party candidate or no one at all if Mr. Trump were the nominee.

Wisconsin was not a total loss for Mr. Trump, however: He picked up three of the state’s 42 delegates, and had a chance to win a handful more depending on the results in a congressional district stretching across much of the western end of the state.

On Tuesday night, as Mr. Cruz quoted John F. Kennedy and Winston Churchill and offered himself as a unifier of a party at war with itself, his two rivals refrained from appearing in public. The silence was especially noticeable from Mr. Trump, who has often used primary nights to boast of his strength, joust with reporters or promote his business interests.

Long after the outcome was clear, a Trump spokeswoman, Hope Hicks, issued a statement assailing “Lyin’ Ted” and calling Mr. Cruz “worse than a puppet — he is a Trojan horse, being used by the party bosses attempting to steal the nomination from Mr. Trump.”

Mr. Cruz’s campaign is convinced that because of Mr. Trump’s recent difficulties, polling in New York that showed him enjoying a comfortable lead is now outdated. Mr. Trump will test his home-state appeal with a rally Wednesday in Bethpage, on Long Island, for which organizers said 18,000 people have requested tickets.

“I am so happy that Wisconsin is over,” said Carl Paladino, a Trump campaign co-chairman in New York who was the Republican candidate for governor in 2010. “They already have rigor mortis setting in on Donald Trump. Now you’re going to see what’s going to happen starting tomorrow.”

Mr. Cruz, who boasted in his victory speech that he had raised more than $2 million on Tuesday alone, plans a campaign to pick off delegates across the state, beginning with visits to the Bronx on Wednesday and the Albany area on Thursday.

But Mr. Kasich could prove a complication. New York State awards three delegates for each congressional district. A candidate who wins a majority in a district gets all three; otherwise, the winner gets two and the second-place finisher gets one. Aides to Mr. Cruz fear that Mr. Kasich’s presence could hold Mr. Cruz to less than 50 percent of the vote in some districts, potentially costing him delegates and handing them to Mr. Trump.

Tuesday’s stakes were the greatest for the Republicans since March 15, when five large states cast ballots and Mr. Trump’s victory in Florida drove Senator Marco Rubio out of the race.

Many Republicans hoping to defeat Mr. Trump saw Wisconsin as perhaps their last chance to thwart his march to the nomination. With no other Republican contests in the two weeks before or after, Wisconsin made for an isolated showdown.

For Mr. Trump, it was an opportunity to add to his wide delegate lead and score an important psychological victory just as the race turns to his native Northeast. A win in Wisconsin, the sort of Democratic-leaning Midwestern state he has vowed to carry in November, would restore his momentum and undercut those most resistant to his candidacy.

For the party’s anti-Trump forces, a victory for Mr. Cruz promised to revitalize hopes that Mr. Trump could be denied a delegate majority, potentially resulting in a contested convention in July. Led by the “super PAC” Our Principles, opponents of Mr. Trump unleashed a sustained assault against him in Wisconsin.

As I said, the fact that Ted Cruz was leading in nearly all the polls in Wisconsin prior to yesterday means that the outcome of the race doesn’t really constitute much of a surprise. It does break Cruz’s previous pattern in which his only wins were either in caucus states or in the primary in his home state and neighboring Oklahoma, but with the race for the nomination now down to three candidates, only two of whom have proven themselves to be real contenders, it was inevitable that Cruz would break that pattern at some point even if only for one contest. What makes the win significant is the fact that it was, in many respects, the last chance for the “Stop Trump” movement to slow the frontrunners momentum toward a majority before the race for the nomination heads into a series of contests in the Mid-Atlantic region where Trump still appears to have significant advantages over both Cruz and Ohio Governor John Kasich. In New York, for example, Trump presently has a 32 point lead in the RealClearPolitics average in a state that is largely Winner Take All in which 95 delegates are at stake. In Pennsylvania, where 71 delegates are at stake in another Winner Take All state, Trump has a somewhat smaller lead, but is still ahead by double digits. Had Trump won Wisconsin last night, then there would have been many making the argument, with good reason, that the race was effectively over and that it would be impossible to stop Trump. Instead, Cruz managed to pull off a victory that will at the very least mean that this race goes right down to the final primaries in June, and possibly that no candidate will walk into the convention with the delegate majority needed to win on the first ballot for the first time since Gerald Ford faced Ronald Reagan in 1976.

Looking at the delegate count, which is still somewhat preliminary since there are six delegates from Wisconsin that have yet to be allocated, the picture continues to slightly favor Trump but the odds of a contested convention have increased significantly. As of this morning, some 1, 607 of the 2,472 delegates that will be voting at the convention have been allocated to a candidate or designated as uncommitted, leaving 865 yet to be allocated. Donald Trump has 740 of those delegates, accounting for 46.05% of the delegates chosen, and would need an additional 497 to get to the magic number of 1,237 delegates that constitute a majority. This means Trump would need to win 57.46% of the remaining delegates in order to get a majority prior to the convention. Ted Cruz, meanwhile, has 514 delegates, meaning he’s won 31.99% of the delegates already awarded. In order to get a majority, Cruz would need to win 83.58% of the remaining delegates to get a majority, making it possible but incredibly unlikely that Cruz would somehow be able to win a majority before the Cleveland convention. Kasich, meanwhile, was mathematically eliminated from winning a pre-convention majority weeks ago and could now only win as a compromise candidate on a second or third ballot. As things stand, then, the most likely outcomes for the Republican race at this point are either that Donald Trump walks into Cleveland with a very slim majority that allows him to win on the first ballot, or he falls short of that number and the question becomes whether he can either make a deal with a candidate like Kasich or Marco Rubio, or both, that leads enough of the delegates supporting those two candidates to win on a first ballot or finds a way to keep his majority together and build on it sufficiently to win on a second ballot. Given the antipathy toward Trump among many in the GOP, though, Trump’s best chance to win the nomination would be to get his majority before the convention, because any other alternative leaves the field open to the “Stop Trump” crowd to chip away at his delegate total.