No, Barack Obama is not going to dump Joe Biden before the Democratic Convention. 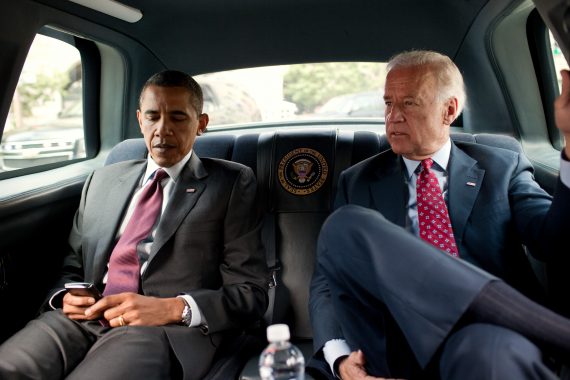 Perhaps it’s because the Democratic Convention is two weeks away, or perhaps it’s just because pundits have nothing else to talk about, but we’ve got another round of people talking about whether or not President Obama is going to dump Vice-President Biden and put someone else, say Secretary of State Hillary Clinton, on the ticket prior to the convention. This isn’t the first time this issue has come up, of course, I’ve written about the same kind of speculation at least six times since 2010 (here, here, here, here, here, and here). Now, in the light of the Vice-President’s “chains” comment in Danville, VA the other day, along with the usual round of mostly innocuous verbal gaffes and miscues we’ve come to expect from Joe Biden, there are people on the right trying to push this meme as if it’s, well, actually news. Rudy Giuliani speculated about the Vice-President’s mental fitness,  Sarah Palin has said that the President should remove him from the ticket and replace him with Secretary Clinton, and The Weekly Standard has joined in on the speculation as well:

President Barack Obama has slightly more than 22 days to drop Vice Presidential Joe Biden from the 2012 Democratic presidential ticket, according to lawyers familiar with the party nominating process. That is, Democrats have until September 6 to formally nominate their presidential ticket which will then be qualified for the 50 state ballots.

And it is still possible for that ticket not to include the current vice president, Joe Biden.

“As a sitting president and vice president, Obama and Biden are both considered the Democrats’ presumptive nominees and will not be the official nominees until after Charlotte,” a lawyer familiar with the party nominating process tells me. “Each party has to file paperwork with each state once the candidates become official nominees. So it’s still quite possible for Obama to drop Biden and replace him with someone else and pay no consequences with listing on ballots.”

The nominating process will take place at the Democratic party convention in Charlotte, North Carolina, which is being held September 3-6.

Speculation that Biden could be dropped has been rampant, despite denials from top Democrats. As NPR reported, “no elected VP has been dropped from the ticket since 1944, when Henry Wallace was removed at the national convention that year in favor of Sen. Harry Truman (D-Mo.). And that turned out to be extremely significant, as President Franklin Roosevelt was dead less than three months after he was inaugurated for a fourth term.”

The likeliest time for an announcement that Biden is to be dumped would be just before the GOP convention—around Friday, August 24. This would step on the Republicans’ planned buildup to their convention, and would give Hillary Clinton, perhaps the likeliest replacement, a couple of weeks to resign as Secretary of State to accept her place on the ticket, while arranging a smooth transition at Foggy Bottom.

So look for activity around August 24.

Weekly Standard is even speculating that the day could be today merely because of the fact that the President is having is regular weekly meeting with the Secretary of State, joined by the Vice-President, which will be followed by the President’s weekly lunch with the Vice-President. Seriously. This is what passes for political analysis at The Weekly Standard apparently.

National Review’s John Fund doesn’t see this as very likely, but still agrees with the general conservative idea that Biden is a liability for Obama:

The White House has to worry that for the next 82 days Joe Biden will be under tremendous scrutiny — especially given the fact that Paul Ryan has become such a media-attention magnet. Everyone is anticipating the October 11 debate between Biden and Ryan. Biden’s penchant for off-the-cuff remarks doesn’t inspire confidence that he won’t unintentionally blurt something out when facing Ryan. For example, he embarrassed the Obama administration recently by prematurely revealing he was “comfortable” with gay marriage — forcing his boss to suddenly endorse gay marriage on a timetable not of his choosing.

Biden’s erratic statements certainly should make Team Obama nervous. I’ve no doubt that some Democratic strategists would love for Biden and Secretary of State Hillary Clinton to swap jobs and bolster the Democratic ticket with a little Clinton magic. But there’s no evidence that Hillary would take that deal. If she wants to run, she is already the front-runner for the 2016 Democratic nomination and would gain no advantage by being yoked to Obama, her old adversary, for the next three months if they lost or the next four years if they won.

So Democrats are stuck with Old Joe, who will turn 70 this November.

[A] sudden Biden departure won’t happen and can’t happen, for a couple of reasons. First, it would require President Obama to admit a mistake. Secondly, it would de facto concede that the critics who deride Biden as an ill-informed, tactless, often obnoxious, loudmouthed, bloviating rhetorical time-bomb have been right all along. Thirdly, no one would believe the “sudden health crisis” or other story put forth to explain the switch. Fourth, there’s no automatic slam-dunk replacement. Think Hillary Clinton wants to jump in two months before Election Day to help save Obama from his own bad decisions?

This is really the part of the argument that people on the right make that I’ve never quite understood. Yes, Joe Biden has a habit of making odd verbal gaffes (most recently talking about winning North Carolina while campaigning in Virginia, and saying America can dominate the auto industry in the 20th Century), but he’s not the first politician who has had a history of gaffes and malapropisms and he isn’t going to be the last. The real question is whether Biden is such a drag on the ticket that he would endanger the President’s chances at re-election, and there simply isn’t any evidence for that. It’s true that the Vice-President’s favorabilility numbers have typically been below those of the President — a July NBC/Wall Street Journal Poll [PDF] gave Biden a 35 percent/37 percent favorability/unfavorability rating — an April Fox News poll showed that Biden had a 41% Job Approval rating, which quite honestly isn’t that bad for the Vice-President in an Administration during a time when the economy is weak and the public frustrated with government. More importantly, there isn’t a single poll that shows that having Joe Biden on the ticket actually hurts the President’s re-election chances in November.

In fact, it seems rather clear to me that Biden helps the ticket with these campaign trips he takes. He relates to working class audiences in a way that President Obama has always had trouble doing, and he’s a great surrogate to send to states like Pennsylvania, Ohio, and Michigan to rally the faithful. The fact that Republicans don’t like him and think he’s stupid? That’s really not relevant because they aren’t the audience that the campaign is reaching out to when they send Biden out on the campaign trail. As for the intelligence issue, Biden may not be the sharpest knife in the drawer but he served for some 30 years in the Senate and was Chairman of both the Judiciary Committee and the Foreign Relations Committee. Stupid the man is not, and, indeed, it was because of his experience in Washington that Obama put him on the ticket in the first place. On the whole, I would say that has turned out to be a wise decision, and certainly a better selection than the one made by his 2008 Republican opponent.

I’ve gone through all the practical and logical reasons why the “Hillary-for-Joe” switch was never going to happen no matter how many times people speculated about it, you can find those reasons at the links above. At this point, though, speculation like this isn’t just wrong, it’s dumb. We’re sitting less than three weeks away from the Democratic National Convention. If President Obama really did want to switch running mates, something that has only happened three times in American history, two of them by the same President, he would have done it a long, long time ago. Joe Biden is staying on the ticket, and I think many people on the right would be wise not to underestimate him.