As expected, Donald Trump and Hillary Clinton both scored big wins in Arizona, while Ted Cruz and Bernie Sanders both continued to win caucus states. 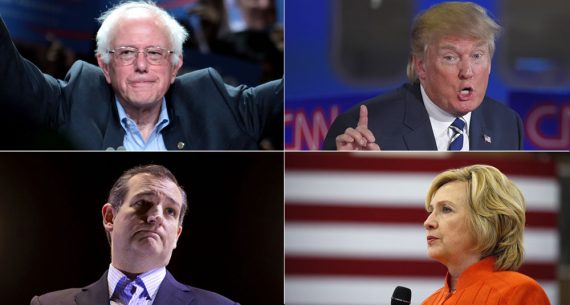 As expected, Donald Trump and Hillary Clinton both picked up big wins in Arizona last night while Ted Cruz and Bernie Sanders picked up caucus wins. In the all important delegate counts, though, it is the front runners who keep winning:

Hillary Clinton and Donald J. Trump overwhelmed their rivals in the Arizona primaries on Tuesday, according to The Associated Press, a show of might from two presidential front-runners who are hoping to avoid prolonging the nominating contest and begin training their fire on each other.

But Senator Bernie Sanders thrashed Mrs. Clinton in the Idaho and Utah Democratic caucuses, demonstrating his enduring appeal among liberal activists even as she closes in on the party’s nomination. And Senator Ted Cruz, who won the Republican contest in Utah, captured more than 50 percent of the vote, giving him all 40 of the state’s delegates and sustaining hope among Mr. Trump’s opponents that he can be slowed, if not stopped.

Mrs. Clinton’s commanding victory in Arizona, where 75 Democratic delegates were at stake, gave her the night’s biggest prize, and her margin there was substantial enough that Mr. Sanders was unlikely to emerge with significantly more delegates, though he took two states to her one.

Speaking to supporters in Seattle after winning Arizona, Mrs. Clinton looked past her primary. She used her remarks mainly to address the terrorist assault on Brussels and turned toward an attack on Mr. Trump and Mr. Cruz, the two leading Republican contenders.

“The last thing we need, my friends, are leaders who incite more fear,” Mrs. Clinton said. “In the face of terror, America doesn’t panic. We don’t build walls or turn our backs on our allies. We can’t throw out everything we know about what works and what doesn’t and start torturing.”

She added, “This is a time for America to lead, not cower, and we will lead, and we will defeat terrorism and defend our friends and allies.”

Mr. Trump easily defeated Mr. Cruz in Arizona, taking all 58 of its Republican delegates and adding to his delegate lead despite Mr. Cruz’s romp in Utah.

The victories recorded by Mrs. Clinton and Mr. Trump showcased the strengths that have propelled them to huge advantages in their respective nomination fights. Mrs. Clinton once again demonstrated her loyal following among older and nonwhite Democrats, both significant constituencies in Arizona. And Mr. Trump proved his appeal among immigration hard-liners, who make up a large bloc of Republicans in the border state.

But Tuesday has also shown why the two dominant candidates are still locked in primaries even as blossoms bloom and Easter approaches. Mrs. Clinton continues to struggle in heavily white states that vote through caucuses, like Idaho and Utah. And Mr. Trump’s landslide loss in heavily Mormon Utah was a reminder of his challenges with some of theRepublican Party’s most religious voters, and of the uneasiness of many conservatives with their front-runner.

Still, Mrs. Clinton’s triumph in Arizona, which Mr. Sanders aggressively contested, offered a psychological boost as she heads into a stretch of contests in states likely to favor Mr. Sanders, like Alaska and Washington, where losses could underscore her lingering vulnerabilities among Democrats.

A hoarse Mr. Sanders, speaking to thousands of supporters in San Diego midway through the evening, claimed credit for what he called “record-breaking turnouts.” Ignoring his lopsided loss in Arizona, he noted that he had won 10 contests so far and predicted, correctly as it turned out, that he would win “a couple more tonight.”

Republicans hoping to stop Mr. Trump suffered another blow as he carried Arizona by a wide margin: He was on a course to receive more votes than Mr. Cruz and Gov. John Kasich of Ohio combined. If his opponents fail to defeat him in Wisconsin, where voters go to the polls in two weeks, they are unlikely to stop him from clinching the nomination on the last day of voting in June.

Mr. Trump’s easy victory in Arizona also provided a sharp rebuttal to assertions by Mr. Cruz that he would struggle in the remaining contests because so many of them allow only Republicans to vote. Aided by Arizona’s generous early-voting laws, Mr. Trump showed that he can win handily in states with closed Republican primaries, where Democrats and independents are barred from voting.

Mr. Trump’s more precise vulnerability appears to have been in states holding caucuses, where organizational strength can be decisive. But after Tuesday, there are no such contests left.

Turnout by voters in Arizona, Utah and Idaho was unusually high, with long lines — some snaking for several blocks — at polling places and caucus sites.

The ballot counting in Arizona was delayed as officials extended voting to account for people who were waiting in line, for hours in some cases, when the polls closed at 7 p.m. In Utah, some Democratic caucus sites had to print additional ballots to accommodate the turnout.

To a large degree, the outcome of these contests was about what the polls had been predicting prior to yesterday, so there isn’t really anything earth shattering to report out of the results. Polling in most of these states was admittedly sparse, but what little of it there was showed Trump and Clinton winning the contests in Arizona while Cruz and Sanders led in the caucuses that were on their respective party’s calendars for yesterday. In the end, the only real question on the Republican side was whether Ted Cruz would be able break fifty percent of the vote in Utah, which would allow him to win all of that states forty delegates rather than having to share them with the other candidates on a proportional basis. This is why, to the extent Donald Trump did campaign in Utah it was aimed at trying to undercut Cruz sufficiently to deny him that 50% threshold. While Trump failed in that effort, his win in Arizona means that he still walked away from the night with a net gain in delegates over Cruz. On the Democratic side, Hillary Clinton also seemed to largely ignore the caucuses in Utah and Idaho, two states that Democrats are unlikely to win in November in any case, in favor of the far more delegate rich Arizona, with the result that she too appears to have walked away from the evening with a net increase in her lead over Sanders in the delegate race.

From here, the contest on both sides of the aisle enters something of a quiet period.

Outside of a caucus in North Dakota that will not result in the selection of any bound delegates, Republicans don’t have any contests until April 5th in Wisconsin and, following that, the April 19th primary in New York followed on April 26th by a series of contests in Mid-Atlantic states ranging from Connecticut to Pennsylvania and Delaware. While polling has been minimal in most of these jurisdictions, what polling has taken place shows that Donald Trump is well situated for victories in what are essentially Winner Take All states when it comes to delegate allocation. In New York, for example, Trump has a seemingly insurmountable lead of more than forty points over Ted Cruz, while polling through mid-February showed him with a double digit lead in Wisconsin and in Pennsylvania. Indeed, the entire primary calendar in April seems well-suited to Trump’s strengths and its hard to see where either Ted Cruz or John Kasich have much of a chance of a breakthrough.

On the Democratic side, there are caucuses next week in Alaska, Hawaii, and, perhaps most importantly, in Washington State where there are 101 delegates at stake. While Bernie Sanders has generally done better in caucus states than Clinton, one can expect that the Clinton campaign will fight hard this week in the Pacific Northwest for the big prize in Washington. After that, the Democratic calendar looks similar to the Republican one, with an April 5th primary in Wisconsin, followed by contests later in the month in Pennsylvania, New York, and a number of Mid-Atlantic states. Wisconsin has been sparsely polled of late, but in mid-February Sanders was making it something of a race for Clinton, but Clinton has huge leads in the most recent polling in both New York and Pennsylvania. If these numbers hold up, April could go a long way toward closing the lid on the Democratic race, but you can count on the Sanders campaign to continue fighting.

So, the biggest take away from last night is that Trump and Clinton continue to march forward while Cruz and Sanders struggle to keep their campaigns alive for hopes of winning a nomination that seem to be dwindling each time a contest is held.