Trump Exceedingly Unlikely to be Removed from Office, No Matter What

A leading conservative makes a truly bizarre defense of the President. 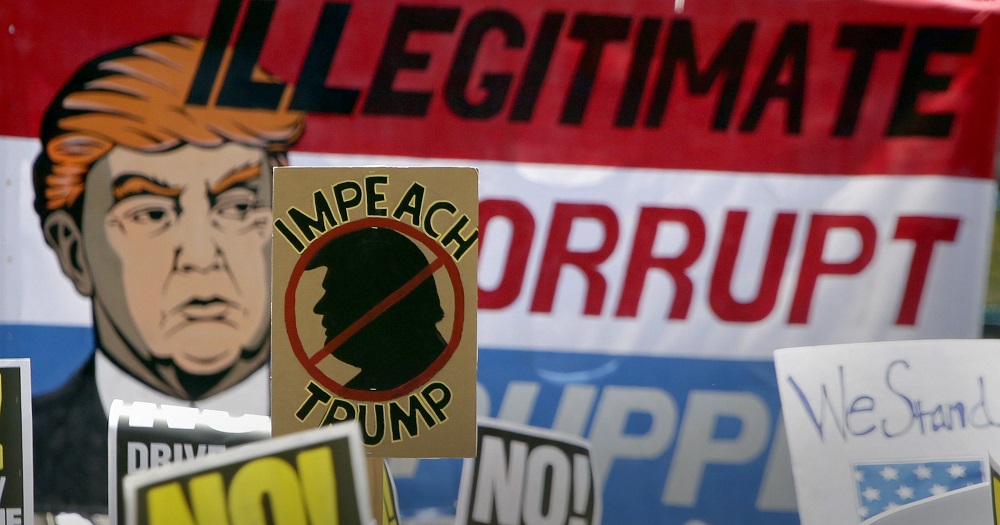 Daniel McCarthy, editor of Modern Age: A Conservative Review, takes to the The National Interest to caution “Don’t Believe the Doomsayers About Donald Trump.”

if you’re very old, you might remember when President Donald Trump was about to be removed from office because of orders he gave Michael Cohen for paying off women like Stormy Daniels. For months Daniels and her own lawyer, Michael Avenatti, were hailed as Trump-slayers by the president’s enemies. And then… the suit Daniels had brought against Trump was dismissed, and she owed him $292,000 in legal fees, as well as a smaller penalty.

Now the same cocksure pundits who were certain l’affaire Stormy was the end of Trump are dizzily excited about a BuzzFeed story that cites two anonymous law-enforcement sources claiming that Trump instructed Cohen to lie to Congress about meetings concerning a Trump Tower project in Moscow. This time Trump’s really, really going down, isn’t he? Why, it’s obstruction of justice, hiding collusion—and any day now that pee tape is going to leak…

The problem with all this excitement is that the people who feel it have a years-long track record by now of confusing desire with reality. Anonymous, supposedly law-enforcement sources who may be breaking the law themselves to leak about an investigation to the press should be viewed skeptically, as should Cohen’s own claims. A very clear paper trail would be needed to prove beyond a reasonable doubt that Trump ordered an obstruction of justice. And even then, unless there is something far more serious behind the obstruction, it will not amount to a politically impeachable offense. Democrats didn’t impeach Bill Clinton over his obstruction of justice and proved lying under oath during the Paula Jones-Monica Lewinsky-Kenneth Starr saga, after all. Democrats themselves established the precedent that lying and obstruction about petty private matters are not impeachable offenses.

I’m largely with McCarthy to this point, with the huge caveat that “prove beyond a reasonable doubt” is not the burden in impeachment cases; indeed, even the preponderance of the evidence standard for civil trials is arguably not required. But he’s right that impeachment is entirely political and that it’s exceedingly unlikely anything we now know or presume would be sufficient to get two-thirds of a Senate with 54 Republicans to vote to remove the President.

I don’t understand McCarthy’s next argument, however:

The president’s foes make a mistake here, too, because they fundamentally do not understand the Republican voters they deplore and despise. Democrats and other Trump haters want to believe there is a moral consensus in this country, and that they, of course, speak for it. Therefore, as embarrassed as Senate Republicans might be, they have to impeach Trump because morality demands it, and the voters who put Trump and the GOP Senate majority in office will either go along or don’t really count—they’re just Russian robots.

As a then-Republican, I thought morality required removing Bill Clinton from office for both the affair with an intern and, especially, for the repeated lies to the public and perjury under oath in covering it up. While I think that was the a priori consensus, I can understand why Democrats thought removing him from office was too severe for those offenses, especially in the face of repeated Republican overreach.

As a current independent, I think repeated collusion with the Russian government to advance personal interests above those of the nation is impeachable. Ditto instructing one’s attorney to lie under oath to investigators and Congress. I can understand why supporters of the President would be very skeptical of those charges, especially since Democrats and we NeverTrumpers have been questioning Trump’s fitness for office from the earliest days of the campaign.

What I can’t understand, however, is how a conservative intellectual could argue that the actions charged against Trump, if true, would be morally acceptable. I know of no modern conservatism that would countenance such crimes.

McCarthy continues with what strikes me as a strange tangent, indeed:

Yet this week as the latest wave of Trump impeachment hysteria was swelling on the left, a story created by the Huffington Post on an entirely different subject was much more revealing about the state of the country: the HuffPost reported, as if it were scandalously newsworthy—as indeed it is for that site’s editors and presumably most of its readers—that Vice President Pence’s wife is teaching at a Christian school that requires a commitment to traditional Christian sexual morality from its pupils and staff. In other words, homosexual practices and promoting what Christians view as sinful is not permitted at the school.

The HuffPost is a news-with-views site and a left-of-center one. But once HuffPost broke this story, the Washington Post and other mainstream outlets picked it up and increased attention to it. This is one way news is made. But even though it’s news, not explicit opinion or advocacy, the assumptions embedded in the idea of what’s newsworthy here are prejudicial to ordinary Bible-believing Christians—their views, and their attempt to live by them, are noteworthy whenever a public figure is connected with them (even as marginal a public figure as the “second lady”) because they are scandalous. Within living memory, this was the attitude many publications had about homosexuality itself. The values have been reversed: homosexuality is now non-controversial (except perhaps when a non-leftist is gay), Christian belief and practice is controversial enough to be newsworthy.

In this instance, I can honestly see both sides. Given the current state of the law, I find it uncomfortable, if not downright weird, to have a Vice President and Second Lady working for organizations that are anti-gay. There are tens, if not hundreds, of thousands of gays and lesbians employed by the federal government, a significant number of them in our armed forces. Having the wife of the man first in line to the Presidency effectively endorsing anti-gay bigotry is unconscionable. And, yet, McCarthy is right: such views were the norm until quite recently and are still widely held, especially in the South and rural America.

McCarthy follows with a non-sequitur:

Why would the Christians who vote for Republicans ever permit anti-Trump liberals to claim to speak for them? Not only is there not a moral consensus between liberals and Christian conservatives, but it should be obvious that believing and practicing Christians have much more to fear from liberal government and liberal social intolerance than they have to fear from lies about a real estate deal in Moscow that never came together.

The president’s foes don’t have to like this reality, but for their own mental health, they ought to recognize it. Conservatives will not abandon Trump because they condone bad behavior but because they understand Trump’s behavior as far less dangerous to their lives and consciences than the political and social agenda of the president’s critics. This is the mirror image of the way liberals tolerated Bill Clinton’s behavior because they understood the alternative to be Republican government they would be contrary to their own deepest beliefs.

But Trump is himself violating the longstanding values of his own constituents. That Bill Clinton got away with despicable—although I would argue less dangerous to the public—behavior has nothing whatsoever to do with whether Trump’s behavior. Further, it’s not as if removing Trump from office means Nancy Pelosi or Alexandria Ocasio-Cortez would assume the Presidency. Indeed, it would go to that icon of conservative moral virtue Mike Pence.