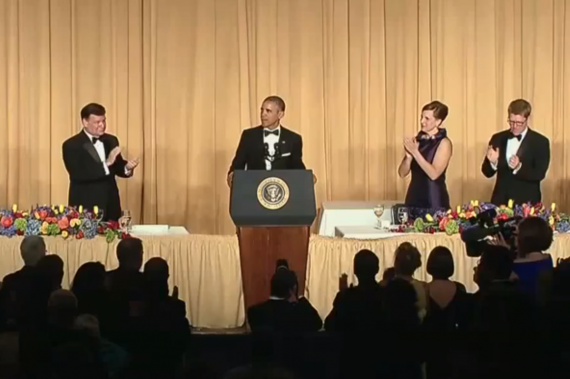 Just as he did last year, President Trump has decided to skip the White House Correspondents Dinner again this year:

WASHINGTON — President Trump will not attend the White House Correspondents Association Dinner this year, continuing a boycott that began his first year in office, the White House announced on Friday, but the president will “actively encourage” members of his administration to go in celebration of the First Amendment.

The president’s decision did not come as much of a surprise. Just a few hours after the announcement on Friday, the president tweeted about the “Fake News Media” and said, “so much of the media is dishonest and corrupt!”

Amid his and his press office’s antagonistic relationships with the news media, the president did not attend the annual gala last year either. The event is typically a cozy mix of journalists and politicians, but during the first year of the Trump administration, it turned into an event for press freedoms.

Mr. Trump has continued to dismiss news stories as “fake news” when he considers them unflattering to himself or to his administration. In recent days he has focused his attention on The Washington Post, its owner, Jeff Bezos, and the company that made Mr. Bezos among the richest people in the world, Amazon.

This decision is hardly surprising given the precedent that the President set last year, but there was some speculation that he might decide to attend after all since he had attended the Gridiron Dinner, which is held every year by the Gridiron Club, one of the most prestigious journalistic groups in Washington. Unlike the dinner held by the Correspondent’s Association, though, the Gridiron Dinner is an untelevised private affair and it is expected that the parties who attend will not share anything but the most general details of the event. That isn’t true of the Correspondent’s Association Dinner and Trump no doubt remembers the affair when he attended back in 2011 and his deadpan reaction to the ribbing he took when he attended the dinner in 2011 from both President Obama and Seth Meyer at that event, which came in the wake of weeks of Trump traveling the nation speaking and speculating that President Obama had lied about being born in the United States. He also no doubt remembers his appearance at the Al Smith Dinner in New York City during the 2016 campaign, where he ended up giving a speech that fell flat when it came to humor and became far too partisan for a crowd used to an event that has always been light-hearted and meant to rise above politics.

In addition to this, Trump’s relationship with the media became increasingly tense during the campaign, during which he frequently attacked reporters and individual media outlets and referred to the media ‘the enemy of the American people.’ This has continued during the fifteen months of Trump’s Presidency, with the President attacking specific news reporters and networks as “Fake News” while clearly taking guidance on a daily basis from whatever he happens to see on Fox News Channel. It has also filtered down to his communications staff, which has openly misled White House reporters on numerous occasions, barred certain members of the White House Press Corps from routine press briefings, and openly misrepresented reality and the truth in press appearances to the point where some of them, such as Senior Advisor to the President Kellyanne Conway are unwelcome on certain news programs. More recently, the odds that Trump would attend this year seemed to become less likely when it was announced that CNN White House Reporter Jim Acosta, who both Trump and White House Press Secretary Sarah Sanders have butted heads with, and a team of CNN reporters would receive one of the organizations most prestigious awards this year for their reporting on the so-called Steele Dossier, which was part of the impetus for Robert Mueller’s investigation of Russian interference into the 2016 campaign and possible collusion between Russia and the Trump campaign regarding the election and negative information about Hillary Clinton. Finally, to be honest, the forum itself seems like one that Trump himself would not have been comfortable attending. The man clearly seems to have little in terms of a sense of humor and doesn’t particularly enjoy being satirized, especially not in person.

Last year, the President ‘counterprogrammed’ the dinner with a campaign-style rally in Pennsylvania in which he unleashed attacks on the media even as reporters gathered in Washington to celebrate Freedom of the Press. On the whole, the program was better without him and without the glitz and glamour it attained during starting during the Clinton years and continuing through the Bush and Obama Presidencies. On the whole, that’s probably a good thing. As I noted in the past, the entire event had become an absurd spectacle, a blend of journalism, politics, and Hollywood celebrity that managed to appear to be both pathetic and inappropriate at the same time. It was pathetic in the sense that the idea of news organizations competing over who got the biggest celebrity to sit at one of their tables. It was, in some sense, not unlike the nerd in High School struggling to ask a girl he has a crush on to the prom even though she’s clearly out of his league. It became inappropriate in the sense that it seemed to create an inappropriately cozy relationship between the press and the politicians they are supposed to be covering with a critical eye. As I said last year, ” it was as if Woodward and Bernstein were covering Nixon by day and smoking cigars and drinking whiskey with him at night.” If that part of the White House Correspondents Association Dinner comes to an end during the Trump Era, it will be a good thing both for our political culture and for the press as an institution. 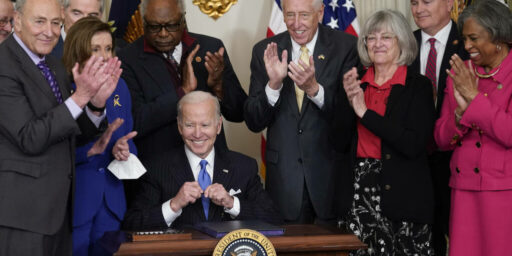 COVID Normalcy and the American Gerontocracy