A word that has come in recent years to be used to refer chiefly to Muslim fanatics obviously applies to a man who murdered nine people because they're black. 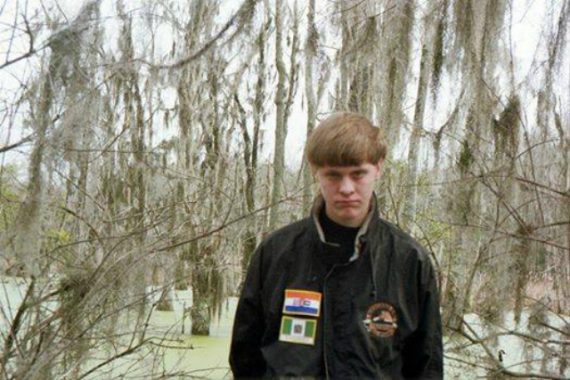 In The Washington Post, Anthea Butler repeats an argument that I have seen elsewhere in the roughly 36 hours since the shootings at Emanuel AME Church and the 24 hours since Dylann Roof was identified as the suspect caught on surveillance cameras and captured 200 miles away in North Carolina, namely the idea that Roof is being treated differently from some other attackers:

Police are investigating the shooting of nine African Americans at Emanuel AME Church in Charleston as a hate crime committed by a white man. Unfortunately, it’s not a unique event in American history. Black churches have long been a target of white supremacists who burned and bombed them in an effort to terrorize the black communities that those churches anchored. One of the most egregious terrorist acts in U.S. history was committed against a black church in Birmingham, Ala., in 1963. Four girls were killed when members of the KKK bombed the 16th Street Baptist Church, a tragedy that ignited the Civil Rights Movement.

But listen to major media outlets and you won’t hear the word “terrorism” used in coverage of Tuesday’s shooting. You won’t hear the white male shooter, identified as 21-year-old Dylann Roof, described as “a possible terrorist.” And if coverage of recent shootings by white suspects is any indication, he never will be. Instead, the go-to explanation for his actions will be mental illness. He will be humanized and called sick, a victim of mistreatment or inadequate mental health resources. Activist Deray McKesson noted this morning that, while discussing Roof’s motivations, an MSNBC anchor said ”we don’t know his mental condition.” That is the power of whiteness in America.

U.S. media practice a different policy when covering crimes involving African Americans and Muslims. As suspects, they are quickly characterized asterrorists and thugs, motivated by evil intent instead of external injustices. While white suspects are lone wolfs — Mayor Joseph Riley of Charleston already emphasized this shooting was an act of just “one hateful person” — violence by black and Muslim people is systemic, demanding response and action from all who share their race or religion. Even black victims are vilified. Their lives are combed for any infraction or hint of justification for the murders or attacks that befall them: Trayvon Martin was wearing a hoodie. Michael Brown stole cigars. Eric Garner sold loosie cigarettes. When a black teenager who committed no crime was tackled and held down by a police officer at a pool party in McKinney, Tex., Fox News host Megyn Kellydescribed her as “No saint either.”

Dean Obendallah makes a similar point at The Daily Beast:

The ‎Charleston shooting‬ involved the assassination of a state senator and the intentional killing and terrorizing of African Americans. This was a terrorist attack on U.S. soil. It’s really that simple.

Yet we still aren’t hearing the media, law enforcement, or elected officials describe it as such. Charleston Mayor Joseph Riley, Jr., called this horrific attack everything but terrorism: “This is an unfathomable and unspeakable act, committed by a hateful and deranged mind.”

And the media have employed words like “egregious” and “heartbreaking,” but there has been little discussion of whether the deadly assault by Dylann Roof was terrorism under U.S. law. (Although I must commend CNN’s Chris Cuomo for raising the terrorism angle on New Day Thursday morning and for tweeting during that discussion: “terrorism doesn’t just mean ‘Muslim extremism.'”)

When you examine what we know about Roof and what he reportedly stated during the shooting, it’s clear to me that he wanted to “coerce and intimidate” America’s black population. His Facebook page depicted him wearing a jacked adorned with the flags of two former white supremacist governments (apartheid era South Africa and Rhodesia.) Experts note that these are both symbols of thewhite supremacist movement. Also Roof’s car had a license plate with the Confederate flag affixed to it.

During the shooting, Roof reportedly told witnesses that he was there “to shoot black people.” Even more telling was Roof’s remark, “I have to do it. You rape our women and you’re taking over our country. And you have to go.”

Keep in mind that Roof didn’t attack a church near his home in Lexington, South Carolina. Instead he traveled nearly two hours to a historic church for the black community, the Emanuel African Methodist Episcopal Church. As President Obama noted in his remarks Thursday, this was “more than a church. This is a place of worship that was founded by African Americans seeking liberty. This is a church that was burned to the ground because its worshipers worked to end slavery.”

In fact, this very church was co-founded by Denmark Vesey, who was one of the leaders of a planned slave revolt in the Charleston area in 1822. That revolt was planned to happen on June 17, 1822, 193 years to the day before Roof’s attack. (The revolt was thwarted by local officials and Vesey, along with five slaves, were hung after a secret trial.)

There actually seem to be two points intertwined in what Butler and Obendallah are talking about here. Initially, they both make mention of the fact that, especially in the initial hours after the attack, there were people in the media and politicians in South Carolina who were expressing what you might call shock and surprise that “something like this” could happen in modern America. On some level, I suppose, this is a natural reaction that people often have to tragedies like this and to that extent its understandable. It’s hard, I think, for people to conceive of the idea that there are people in the world capable of committing acts like this, or the shooting at the movie theater in Aurora, or the Sandy Hook massacre, so we tend to comfort ourselves by thinking that this is some anomalous event that doesn’t have any overall meaning.

Beyond that superficial level, though, it seems to me that this attitude — which roughly boils down to the “crime, boy I don’t know” line that Governor Rob Ritchie uttered at the end of Season Three of The West Wing — is just really incredibly naive.  Do the people who say these things not pay attention to the world we live in? Are they really stupid enough to believe that evil and bigotry and hatred have been banished from the world? It was only 52 years ago that a group of men set off explosives at a church in Birmingham, Alabama and killed four young African-American girls. Are we really think things have changed so much that there are not people in this country capable of such acts even today? Granted, racial prejudice even in the Deep South is not as prevalent as it used to be, thankfully, but it most assuredly still exists and it seems rather obvious that this mentality influenced Roof on some level. As Obendallah notes above, his Facebook profile, which you can see at the top of his post, includes patches of the flags of apartheid South Africa and the unrecognized apartheid-like state of Rhodesia which existed from 1965 to 1979 and was run by its white minority government along roughly the same lines as the government that existed at the time in Johannesburg. His roommate and others that knew him described his descent into the kind of white nationalist racism that has reared its head all too often in the past. And, of course, according to the reports that have come through those who have talked to the three survivors of the attack, he told his victims before he killed them that he had to kill them to prevent African-Americans from “raping” whites and “taking over our country.” The events of the world make it clear that there area still unfortunately plenty of people capable of committing the acts that Roof committed in Charleston, and one would have to be willfully blind to deny the fact that the ideology that appears to have motivated him still exists in corners of this country.

The second point that Butler and Obledallah make is that there seems to be a tendency to use different rhetoric when referring to something like the Boston Marathon Bombing, for example, and Wednesday night’s events in Charleston. In the first case, the act was almost immediately described as an act of terrorism, and that was obviously what it was. In this case, though, and even more so in the cases of people like Adam Lanza, James Holmes, and Wade Michael Page, the rhetoric from some corners concentrates more on the argument that this person was an anomaly or that they were “mentally ill,” whatever that may mean. To be fair, in the cases of Lanza and Holmes, as well as the case of Jared Loughner and Seung-Hui Cho, there was clear evidence that those people were suffering from some sort of mental illness long before they went on their respective rampages. As I said in the aftermath of Loughner’s attack (see here, here, and here), it’s apparent that we have real issues in this country in diagnosing and treating mental illness that makes acts like theirs more likely.

We don’t know very much about Roof’s actual mental state right now. There have been the typical reports about him being an introvert and a loner that seem to be said about every person like this, and he did have a criminal record although the charges did not consist of any type of violent crime. The charge pending against him, though, was a felony and it while it would have been illegal for him to purchase  a weapon on his own, he apparently obtained one as a gift from his father, though it is not clear if that is the weapon used Wednesday night. That too is a discussion worth having, as President Obama noted in his remarks yesterday morning. However, nothing that we know about Roof suggests that he suffered from the kind of diminished capacity that would decrease moral culpability.

“Terrorism” today tends to be a word that is limited only to acts by fundamentalist Muslims, but it’s worth noting that it has a much longer history than that in the United States. On September 16th, 1920 nearly 150 were killed, and hundreds more injured, in a bombing by anarchists. Before the September 11th attacks, the deadliest terrorist act on American soil was committed with Timothy McVeigh and Terry Nichols plotted to carry out revenge for the Waco disaster. I’m not sure where Roof fits into all of that, but to the extent that he seems to have been clearly motivated by ideology rather than just the random desire to kill people, he certainly falls into the category somewhere. It also seems quite apparent, though, that Roof was steeped in racism and that this is no small part of what motivated him to take the roughly two hour trip from his home to Charleston to one of the more significant African-American churches in the country. If Roof’s problems were just about mental illness, then he likely would’ve picked out any other random target, likely one closer to where he lived. The fact that he went to Emanual A.M.E. Church suggests that he was targeting that specific church for a specific reason. In a confession made to authorities after he was arrested yesterday, Roof apparently stated that he committed the murders because he wanted to start a race war. If that doesn’t make him as much of a terrorist as Tamerlan and Dzhokhar Tsarnaev, who targeted the Finish Line of the Boston Marathon for very specific reasons, then I’m not quite sure what would.