The GOP has bounced back significantly from the lows it experienced after last year's government shutdown.

A new Gallup poll shows that Americans now have basically the same opinion about both of our major political parties, but that may be good news for the Republican Party heading into the midterm elections:

PRINCETON, NJ — Americans’ views of the Democratic and Republican parties are now similar, mainly because of their more positive ratings of the GOP. Since bottoming out at 28% last fall during the government shutdown, Americans’ opinions of the Republican Party have grown more positive and are nearly back to pre-shutdown levels. Over the same time period, ratings of the Democratic Party have generally held steady.

There are encouraging and discouraging signs for both parties in the latest poll, conducted Sept. 4-7, just two months before the important midterm elections.

Given the fact that it was less than a year ago that only 28% of voters were saying that they viewed the Republican Party favorably, this is quite a turnaround for the GOP. At the time, just in the wake of the disastrous sixteen day government shutdown, there were many pundits who were predicting doom for the GOP in 2014 thanks to the overwhelmingly negative public reaction to what ended being a pointless political stunt. Since then, though, the GOP has benefited from a number of factors that have both helped to put the disaster of the shutdown behind them and focus public attention on areas that played to Republican strengths and highlighted Democratic weaknesses. Most prominently, of course, there was the disastrous rollout of the Affordable Care Act last October, an event that stretched well into December and beyond. While the problems had started while the shutdown was still going on, they didn’t receive widespread media attention until after it had ended and, as they went on, things just got worse for the Administration and the Democrats and worse for the GOP. Since then, we’ve had a wide range of events in the news ranging from the Ukraine crisis and the Veterans Administration scandal to the rise of the supposed threat from ISIS and the President’s decision to become the fourth President in a row to engage in military action in Iraq. At the same time, the months since the shutdown have not been characterized by the same sort of high profile showdowns on Capitol Hill that have marked most of the Obama Administration. In December, in fact, both parties were able to sit down and reach a real budget agreement for the first time in four years. The one example of GOP obstruction has been on the issue of immigration, where polling suggests that they aren’t taking a very big risk by blocking immigration reform, except of course among Hispanic voters.  All of this, combined with the fact that the President’s own job approval numbers have been nosediving for months seems to have contributed to a rehabilitation of sorts for the GOP.

In fact, as this chart shows, the favorability ratings for the two parties are roughly at the same point they were prior to the 2010 elections: 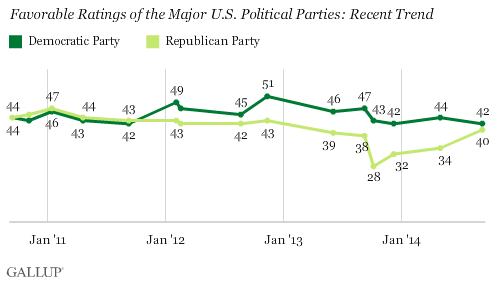 This doesn’t necessarily mean that 2014 will be a repeat of 2010, of course. In fact there are plenty of reasons to believe that, regardless of how the battle for control of the Senate turns out, we’re not likely to see a repeat of the wave elections we saw at the Congressional level in 2006, 2008, and 2010. Nonetheless, the GOP does seem to be ticking upward at the right time and, combined with all of the other factors that generally favor the GOP in midterm elections, that’s likely to help them in November. It’s possible, I suppose, that those who argue that the GOP has peaked too soon, such as The Hill’s Brent Budowsky, will turn out to be correct in the end. As things stand right now, though, and not withstanding the fact that ther race for Senate control looks like it did tighten after Labor Day,  I’d say that Republicans have good reason to be cautiously optimistic at the moment. Whether that will be true in six and a half weeks is, of course, another question.