Ben Carson is running for President. 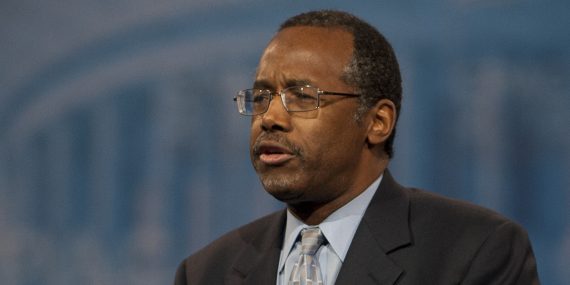 Last night, former Johns Hopkins University neurosurgeon Ben Carson, who has made a name for himself in conservative circles with his often vitriolic criticisms of President Obama and the Affordable Care Act, confirmed what had been hinted at for many weeks and announced that he is entering the race for the Republican nomination for President:

Ben Carson, a retired neurosurgeon who has never held elective office, said on Sunday that he would seek the 2016 Republican nomination for president, joining the party’s fast-growing field.

Mr. Carson, who appeared on the political scene just two years ago and gained attention among conservatives for a speech highly critical ofPresident Obama, planned a formal announcement of his candidacy on Monday in his native Detroit. He began his rise from poverty there to the heights of medicine — a path that shaped his rejection of liberal social policies in favor of self-reliance.

On Sunday evening, Mr. Carson said in an interview with a Washington television station that he was entering the race. “I’m announcing my candidacy for president of the United States,” he told WJLA.

Despite a crowded Republican field likely to be among the strongest and broadest in decades, Mr. Carson, 63, believes there is a clamor for an insurgent candidate without ties to party politics.

But that belief is likely to be tested quickly as he is forced to compete for donors and support with more established and organized candidates like Senators Ted Cruz of Texas, Rand Paul of Kentucky and Marco Rubio of Florida — all of whom have announced their candidacies — and leading party figures like Jeb Bush, the former Florida governor, and Gov. Scott Walker of Wisconsin.

Mr. Carson may also struggle to claim the outsider mantle. Carly Fiorina, the former Hewlett-Packard chief executive, also planned to formally enter the Republican race on Monday, making an online announcement in contrast to the staged kickoffs of Mr. Carson and the other declared candidates.

Nor will he have the spotlight for long: On Tuesday, former Gov. Mike Huckabee of Arkansas plans to announce his second presidential campaign in his native Hope, Ark.

One challenge for Mr. Carson is whether he can appeal beyond the grass-roots conservatives who initially flocked to him, delighted by his eye-gouging of the president. It is a rhetorical style he has pledged to eliminate as he seeks broader support.

Mr. Carson’s biography will feature prominently in his campaign. His mother, Sonya Carson, had only a third-grade education, but he went on to graduate from Yale and the University of Michigan Medical School, and at age 33 was named chief of pediatric neurosurgery at Johns Hopkins Hospital in Baltimore, becoming the youngest person, and the first black doctor, to hold the title.

He burst onto the political scene in 2013 with a speech at the National Prayer Breakfast that denounced the country’s “moral decay” and Mr. Obama’s health care law. The Wall Street Journal followed with an editorial, “Ben Carson for President.”

An independent political action committee seeking to draft him to run demonstrated his small-donor appeal by raising $13 million. It announced it had recruited leaders in all 99 counties in Iowa, which holds the first nominating contest.

After his announcement speech, Mr. Carson is scheduled to travel to Iowa, which has a history of supporting outsider candidates, for three days of speeches and meet-and-greets, in what will be his first stint of retail campaigning in the state since a book tour last August.

The Washington Post reports this morning that Carson’s plans have changed. While he will still give his announcement speech in Detroit today, the trip to Iowa has been postponed so that Carson can travel to Dallas to be with his mother, who suffers from Alzheimer’s Disease and is apparently very close to death. In any case, though, the campaign is going forward, although it still seems fairly clear that Carson’s campaign is, as I characterized it last month, rather quixotic. In the national polls, for example Carson has slipped considerably since the last time we looked at the numbers, largely it seems because candidates such as Ted Cruz, Rand Paul, and Marco Rubio have entered the race and seen their numbers rise. Things actually look a little better for Carson at the state level, though. He’s at 9.0% in the polling average in Iowa, for example, and at 8.5% in South Carolina, thanks largely, no doubt, to the fact that likely Republican voters in those states tend to be more conservative. He doesn’t fare so well in New Hampshire, though, where he stands at 5.5% in the polling average. He’s still at 9.3% in Florida, but there hasn’t been any polling in that state in the month since Cruz, Paul, and Rubio entered the race so those numbers aren’t particularly reliable at the moment.

These aren’t bad numbers for someone who hasn’t run for office before, of course, but they seem to be largely reflective of Carson’s press clippings rather than a reflection of his abilities as a candidate. As I said, Carson has made a name for himself in conservative circles by being a frequent and loud critic of the President. He first burst on the scene as a political figure when he spoke at the National Prayer Breakfast in 2013 and, with the President sitting just feet away from him, proceeded to attack his policies in language that was rather strong for the venue in question. Since then, in both speeches and frequent appearances on Fox News Channel  equated the Affordable Care Act to the September 11th attacks, made frequent use ofNazi analogies to criticize the President, and said that “progressives” want to turn the United States into Nazi Germany, compared abortion to human sacrifices by civilizations of the past. More recently, he claimed that prison rape is proof that being gay is a choice. As I’ve said before, though, while this rhetoric may resonate well to the Republican base, it’s hard to see how it can be the basis for a campaign that would have to appeal to more than just the hard-right wing of the party, especially when there are people with actual political experience in the race.

That being said, Carson is likely to get some attention from the national media going forward that could push him closer to the top of the field, at least temporarily. He has an interesting life story and, notwithstanding his political comments, a career that is worthy of no small amount of praise. Additionally, the fact that he says provocative things is likely to lead reporters to pay attention to him the same way the paid attention to candidates like Herman Cain during the 2012 campaign. Like Cain, though, it does not appear that Carson has much chance of rising very far for very long. His most obvious problem, of course, will be money. While Carson’s campaign is likely to get donations from the grassroots, and may even get some impressive numbers in that area, he’s simply not going to be able to match the fundraising abilities of people like Cruz, Paul, Rubio, or Bush, and he’s not going to have the kind of SuperPAC support that other candidates are going to get. At this point, I would be surprised if Carson were still in the race when Iowans head to their caucuses in February 2016.

Nonetheless, there’s another candidate in the race. And there are two more coming quickly behind him.