Creigh Deeds One Year Later, And The Problems With Mental Health Care In The U.S.

Just over one year ago, Virginia State Senator Creigh Deeds was attacked by his son, revealing problems with our mental health system that have yet to be adequately addressed. 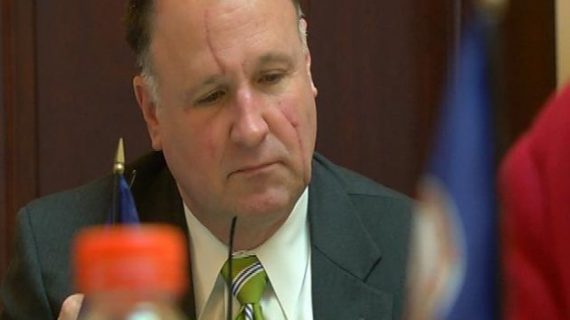 It was just over a year ago that Virginia State Senator Creigh Deeds, who represents Bath County in western Virginia and had been the Democratic nominee for Governor in 2009 in a race he lost to former Governor Bob McDonnell, was stabbed and nearly killed by his son Gus outside the family home. As that story unfolded, it revealed problems in the mental health care system in the Commonwealth, including most prominently the obstacles that Senator Deeds had faced in trying to get his son admitted for observation just one day before the attack that nearly killed him, and which ended with his son’s suicide. Since then, there have been some changes made that make it somewhat easier for family members and therapists to get treatment for someone who is an imminent danger, but much work remains to be done.

In the meantime, Washington Post reporter Stephanie McCrummen is out with a profile of Senator Deeds, the year that he has had, and the work he’s trying to do to fix the mental health care laws so that something like this doesn’t happen again. It defies easy excerpting, so I’ll just recommend reading the whole thing.  I can’t imagine what Senator Deeds has been through this past year, but my best thoughts are with him.

The article resurrects, though, many of the issues that came to the forefront in the wake of the attack on the State Senator, and which have also been discussed in the national media, and quickly forgotten, in the wake of tragedies such as the shooting of Congresswoman Gabby Giffords, the Aurora, Colorado movie theater shooting, the tragedy at Sandy Hook Elementary School, and the shootings this past May on the campus of the University of California, Santa Barbara.  As with Gus Deeds, in each of those cases there had been signs that the perpetrator of the crime was suffering from some form of mental illness for which, for one reason or another, they didn’t receive treatment. In the case of Jared Lougher, the shooter in the Giffords case, there were signs of problems when he was attending a Community College outside of Tucson, but rather than report anything the authorities handled the matter by barring him from campus. James Holmes, the shooter in the Aurora case, was receiving some treatment from a mental health professional at the University of Colorado, but that ended after he dropped out of college and there was apparently no effort to alter authorities about Holmes even though there had been some evidence adduced during therapy that he could be a danger. Adam Lanza, the Sandy Hook shooter, apparently never received treatment despite signs of trouble in the years before he took his fateful steps. And, finally, the parents of Elliot Rodger had, much like Senator Deeds, attempted to get help for their son in the time prior to the shootings in May but were largely thwarted by laws that make it difficult to involuntarily commit people for more than just a limited period of time absent some stronger evidence that they are a danger, or that they are so delusional that they cannot care for themselves. The common thread through all of these stories, and others that haven’t received national attention, is the fact that our nations mental health system seems to be in serious need of reform, and that failures in that system can all too often lead to tragedy.

As I’ve noted before, there are many reasons for why things are the way they are when it comes to mental health treatment in the United States. To a large degree, for example, the reason that it is often difficult for family members or concerned friends to get help for people who might need it is because of the fact that there is a long history of abuse associated with mental health care. Before the reforms of the 1970s, for example, many of the facilities where these people were “treated” were little more than holding pens in which patients were allowed to exist in filth and barely treated at all for their problems, to the extent we even knew back then how to treat them at all. Mental health also became an excuse in many nations to mistreat political dissidents and people who were pushing culture in ways disapproved of by the state. In the United States, the classification of homosexuality as a mental illness led to many people being treated horribly by so-called professionals. And, of course, there are serious individual liberty concerns associated with the very idea of involuntary commitment and the question of whether or not the state can force someone to undergo treatment, or take medication, against their will. Additionally, there’s the fact that mental illness of any kind, even something that has become as common as clinical depression, carries with it a stigma that can cause serious problems for someone personally and professionally if revealed publicly. We wouldn’t think, for example, of judgment someone diagnosed with cancer as if there’s something wrong with them, but that’s a common reaction to someone who we learn has a mental illness like depression or schizophrenia. That stigma often leads people to remain quiet rather than seek the treatment they need, and family members to ignore signs in front of them instead of getting people help that they need.

The tragedy of the Deeds case, of course, and the Elliot Rodgers case in California, is that in both cases they had parents who tried to get themselves and found themselves thwarted by the law, and by a system that is often in such disarray that physicians and administrators aren’t even aware of what resources they have available. Deeds, for example, had tried to get his son admitted to the local hospital in Bath County, which isn’t a very big facility to begin with given that it is in the middle of one of the most rural parts of the Commonwealth, only to be told that there were no beds were available. Left unstated, because apparently nobody was aware of it, was the fact that there were beds available both in Charlottesville and in Roanoke, each of which are roughly an hour to an hour and a half away, as well as space at facilities in Richmond and Northern Virginia. Thanks to Deeds’s influence with his colleagues, there have been changes to Virginia’s mental health laws, and Elliot Rodgers parents have lobbied in Sacramento to change the laws in California. Those changes have been minimal at best, though, and of course they don’t address problems in other parts of the country. Apparently, those states are willing to wait until there’s a tragedy of their own before dealing with those problems.

In any case, as the profile in the Post makes clear, the consequences of a broken mental health care system can be long lasting. Senator Deeds has chosen to use the tragedy to try to change the law, and he deserves credit for that, but I can’t imagine the pain that he goes through on a regular basis both physically and otherwise. It would be nice if we could use such a tragedy to actually make things better.