Notwithstanding the hype, there's one very big reason why the idea of Elizabeth Warren as a viable candidate for President doesn't make much sense. 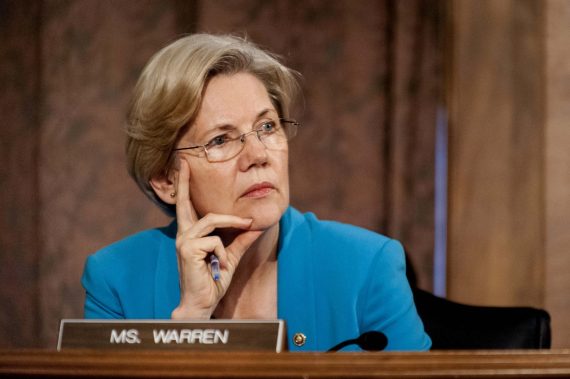 Notwithstanding the fact that she has denied, on numerous occasions, having presidential ambitions, much less plans to run for president, Massachusetts Senator Elizabeth Warren keeps being mentioned by pundits and political observers as someone who could potentially be a challenger to Hillary Clinton for the 2016 Democratic nomination, or an alternative candidate should Hillary decide not to run. Much of this speculation seems to be little more than wishful thinking on the part of political analysts and reporters hoping for something other than a quasi-coronation on the Democratic side of the ballot in 2016 and by Republicans who have been in a engaged in a rather obvious strategy of trying to undermine Clinton before she even throws her hat in the ring. In addition, there seems to be at least some contingent of the so-called “progressive” wing of the Democratic Party that wants to see Warren run, either to force Hillary to move to the left on certain issues or because they really don’t like Clinton. Some of them even recently formed a “Ready For Warren” group not unlike the “Ready For Hillary” movement that has been going for the better part of a year now, although it is much smaller in scope.

Despite all of this speculation and hope in some quarters, though, the actual prospects for a Warren campaign seem dim at best. She has said on multiple occasions that she has isn’t running for president, and that she wants Hillary Clinton to run. Polling has shown her to be far behind the former Secretary of State in hypothetical primary match-ups, although much of that may admittedly be due to name recognition issues. Additionally, the argument that some have made to try to analogize a potential Clinton-Warren race to what happened in 2008 falls apart once you recognize the profound differences between the Democratic race in 2008 and the expected race in 2016. Perhaps the most important argument against a Warren run for the White House, though, lies in the fact that some of her biggest donors are warning her not to run for president if Hillary Clinton runs:

Elizabeth Warren does in fact reverse her repeated denials of interest and decides to run for president, she will have to do so virtually alone. That’s because almost to a person, her earliest and most devoted backers do not want her to challenge Hillary Clinton for the Democratic nomination.

“If Elizabeth called me up and said, ‘I am thinking of running for president,’ I would say, ‘Elizabeth, are you out of your goddamn mind?'” said one New York-based donor who has hosted  Warren in his living room. “I really like Elizabeth, but if Hillary is in the race it just makes no sense.”

This conversation was echoed again and again in more than a dozen interviews with big-ticket Democratic donors in Warren’s hometown of Cambridge, Massachusetts, and in cities that operate as ATMs for the Democratic money machine, like New York, Washington, Los Angeles, and San Francisco. Over and over again, the message was the same: Stay in the Senate, Liz, stay in the Senate.

There are many reasons why Warren would want to mount a campaign. The primary animating force of her political career—that the economy is unfairly tilted toward the rich, and that the Wall Street banks are rigging the game—has struck a chord with the activist wing of her party. And that same activist wing doesn’t believe that Hillary Clinton, with her six-figure speeches to Goldman Sachs and her ties to the triangulating policies of her husband, can carry that banner for them. Warren has become a top Democratic surrogate in red states like Kentucky and West Virginia, and in races across the country, “The Warren Wing” appears to be on the march

Were she to run, Warren would face enormous challenges, mainly in that Hillary Clinton remains historically popular with Democrats. But the fact that the network of Democratic insiders who helped Warren raise a record $42 million for her 2012 Senate bid want her to stand down in deference to Clinton should all but end speculation that she will be a candidate.

“I think she is outstanding. She is articulate. She is persuasive. She can hit a piece of bullshit from a hundred yards away,” said Victor A. Kovner, a Manhattan lawyer who hosted Warren for a fundraiser way back in 2011. But, he added, “I will be supporting Hillary in 2016. No question about that.”

Some Democrats who say they support Hillary still want Warren in the race, under the theory that it will give a platform to Warren’s ideas on the economy that she cannot achieve while serving as one of 100 senators.

But Kovner, echoing other members of the Democratic donor class, rejects this view. “People should run to win,” he said. “They shouldn’t run to have a voice. That is what Herman Cain did.”

Even if Clinton decided not to run, some of Warren’s supporters doubt she’d be a viable candidate:

“If Hillary comes out tomorrow and says, ‘I’m not running,’ obviously, this becomes a difference question, but I still think she shouldn’t run,” said one New York-based financial supporter. “She has so many holes in her resume. Even Obama had more experience than she does.”

Added another California-based donor who has given thousands of dollars to Warren’s political action committee, PAC for a Level Playing Field, “I don’t think she would be a very good president. Two years ago she was a college professor, for goodness sakes. She has one issue and she is a great advocate for that one issue. She doesn’t have the breadth of experience necessary to be president.”

And even those who say they would be the first to line up behind a Warren candidacy say that part of them hopes she doesn’t do it. “Of course I would be with her,” said one Massachusetts Democrat who was one of Warren’s earliest supporters. “But this is Ted Kennedy’s seat. We know what can be accomplished in a long Senate career—it is almost as much as can be accomplished in the White House.”

Unlike many others, I have never really bought into the idea of Elizabeth Warren as a Presidential candidate. Notwithstanding her populist message, which really isn’t all that different from what we hear from Democrats like Brian Schweitzer and Russ Feingold, whom many Democrats have tried to coax back into politics more than a few times in recent years, she has not struck me as the kind of candidate that would really catch on nationally the way that Barack Obama did in during the 2008 campaign. Additionally, outside of the aforementioned progressive wing of the Democratic Party, I haven’t seen all that much evidence that the ideas she talks about would really resonate with the electorate as a whole. Most importantly, though, my own observations of her during the 2012 campaign and since she has taken office don’t indicate to me the kind of person that would come across well on the campaign trail. She’s not a particularly charismatic public speaker, for example, which isn’t surprising given her history as an academic. In fact, many of her speeches come across more as law school lectures than campaign speeches, and you don’t win elections lecturing the voting public as if they were mere students. Compared to many of the other potential candidates that could enter the Democratic race even if Hillary Clinton doesn’t, there just doesn’t seem to me to be anything about Warren that indicates that she would be that special candidate that would be the one to come out of relatively political obscurity to win her party’s nomination.

Even if you disagree with my assessment of Warren’s abilities as a candidate, though, the fact that many of her own donors are already telling her that she shouldn’t run seems to be pretty strong evidence in favor of the idea that she isn’t going to run or that, if she did, she would not be nearly the threat to Hillary Clinton that many suppose she would be, or that the media and Republicans seem to hope she would be.