Lt. General Michael Flynn is declining to comply with a Congressional subpoena regarding the Russia investigation, and invoking his rights under the Fifth Amendment. 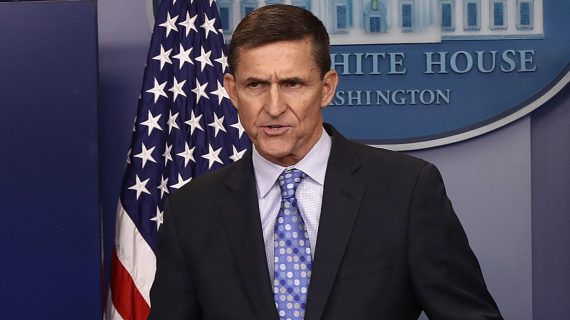 Retired Lt. General Michael Flynn, Donald Trump’s former National Security Adviser who was forced to resign after it was revealed that he had lied to the transition team and to Vice-President Pence regarding his contacts with Russia’s Ambassador to the United States, has stated publicly that he will not comply with a Congressional subpoena and will instead seek to invoke his right to remain silent under the Fifth Amendment:

WASHINGTON — Michael T. Flynn, President Trump’s former national security adviser, has rejected a subpoena from senators investigating Russian interference in the 2016 election and instead invoked his right against self-incrimination, a person familiar with his decision said Monday.

Mr. Flynn had been ordered by the Senate Intelligence Committee to hand over emails and other records related to any dealings with Russians. His decision to invoke his Fifth Amendment right puts him at risk of being held in contempt of Congress, which can result in a criminal charge.

It is up to lawmakers to decide whether to pursue that path. It was not immediately clear how the committee’s leaders would respond, though Senator Richard M. Burr of North Carolina, the panel’s Republican chairman, signaled late last week that it might not take that route.

Mr. Flynn’s decision was first reported by The Associated Press.

Mr. Flynn’s legal issues have been a problem for the White House from the start. He is under scrutiny by congressional committees, federal law enforcement officials and the Pentagon’s inspector general for his ties to Russia and Turkey while advising the Trump campaign and then serving as a senior administration official with access to the top secrets of the United States and influence over national security decisions.

The Trump transition team was told weeks before the inauguration that Mr. Flynn was under federal investigation, The New York Times reported last week. White House officials have declined to comment.

As in previous cases, is important to remember that seeking the protection of the Fifth Amendment cannot be interpreted as an admission of guilt by a Court, and it should not be interpreted in that manner by members of the general public. The Fifth Amendment privilege is among the most important in the Constitution, and it is one that is available to people who are asked to testify in public and who believe that their testimony could be used as evidence against them in an ongoing or subsequent investigation. Indeed, it would be malpractice for an attorney representing such a person to fail to advise them of the wisdom of invoking their Fifth Amendment rights. Given this, speculation regarding Flynn’s guilt or innocence would be entirely irresponsible at this time.

Flynn’s move is hardly a surprise, of course. He is the apparent focus of an investigation into Russian meddling in the Presidential election and the Trump campaign’s contact with Russian agents during and after the campaign. Thanks to extensive ties to Russian media and other interests both before and after becoming a formal part of the Trump campaign, it’s obvious that Flynn was going to be at the center of that investigation along with figures such as Carter Page, Paul Manafort, and others who have been a close part of the Trump campaign at some point or the other. Additionally, Flynn is further tied into the investigation by virtue of the fact that President Trump allegedly asked James Comey, who was still serving as F.B.I. Director, to drop the investigation into Flynn at a dinner that took place just one day after Flynn had formally resigned his position at the White House. Finally, in a matter that is seemingly separate from the Russia investigation, reports have claimed that Flynn failed to register as an agent of the Turkish Government at the time when he was being paid by that government to lobby on its behalf and that Flynn had apparently had a role in policy making inside the Trump team regarding Kurdish rebels that was implicated directly by his work for the Turkish Government. It has also been revealed that the Trump transition team was aware of the fact that Flynn was under investigation at the time he was offered the position of National Security Adviser. Given all of this, and the fact that anything he says to Congress or provides in the form of documents in response to a subpoena could potentially be used against him in the investigation and any subsequent prosecution, the fact that he’s invoking his rights under the Fifth Amendment is not at all surprising.

At the same time, though, it’s important to recognize the context in which the privilege against self-incrimination is being invoked in this case, and it’s one which distinguishes it to some extent from the normal invocation of the privilege. In most cases, the Fifth Amendment’s protection against self-incrimination is invoked when someone is being asked or compelled to testify in public regarding a pending or ongoing investigation or a situation that could develop into an investigation of which they are an actual or potential target. In those case, the invocation falls within the traditional category that most Americans are used to, such as the situation faced with former IRS employee Lois Lerner invoked her right against self-incrimination when she was called before a House committee investigating that matter. While there was some question at the time regarding whether or not she had either properly invoked the privilege, or waived it, by making a statement prior to invoking her rights in which she said she had done nothing wrong. Many Members of Congress took the position that Lerner had waived her rights, even though the arguments in favor of that position were rather weak, to say the least. Ultimately, Congressional efforts to hold Lerner in contempt were thwarted when the Justice Department determined that Lerner had not waived her rights and could not be compelled to testify before Congress or punished for refusing to do so absent immunity.

In this case, Flynn was not being called on to testify and the subpoena in question was not requesting his testimony before the Committee, at least not yet. Instead, the subpoena consisted solely of a request for documents related to the investigation. Ordinarily, such a subpoena is not covered under the Fifth Amendment because it is not deemed to be testimonial. However, as the Supreme Court recognized in United States v. Hubbell, a 2000 case involving charges that had been brought against Clinton confidant Webster Hubbell related to the Whitewater case based on documents that he had provided in response to the subpoena. In its decision overturning Hubbell’s conviction, the Supreme Court ruled on the so-called Act of Production Doctrine. Under that doctrine, the production of documents, even though not ordinarily entitled to a Fifth Amendment protection, could have a “testimonial aspect” if the act of production gives the government information it doesn’t already have regarding the existence, custody, or authenticity of the documents in question. In their letter to the committee, which is embedded below, Flynn’s attorneys argue that this is precisely the case in this situation. Whether the argument succeeds could well depend on what a Court has to say in the event the committee chooses to attempt to hold Flynn in contempt for failing to comply with the subpoena.

Here’s the letter from Flynn’s attorneys to the Senate Intelligence Committee: