With criminal charges and an election hanging over his head, Israeli Prime Minister Benjamin Netanyahu is looking to the political right for support and survival. 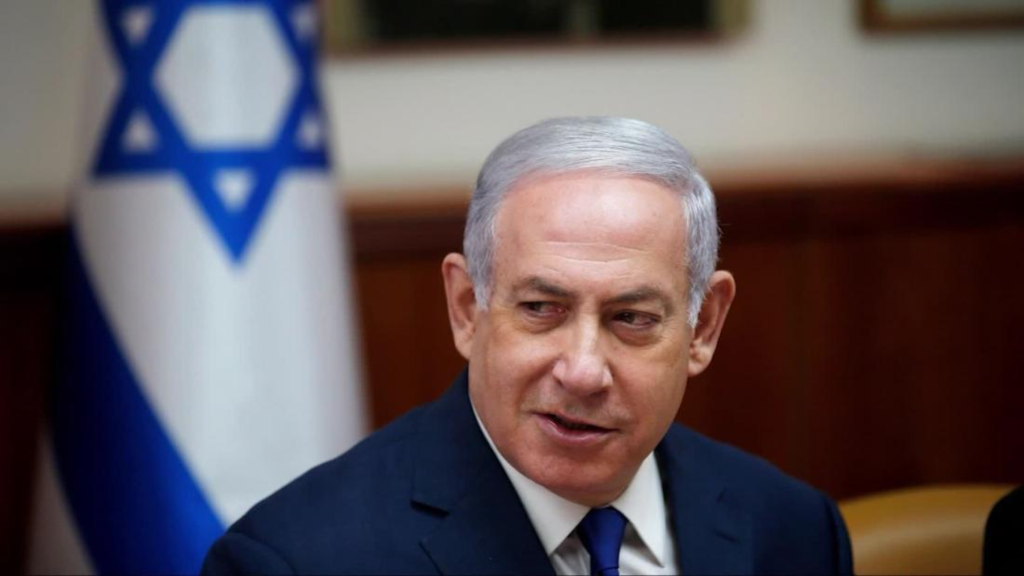 Last week, Israeli Prime Minister Benjamin Netanyahu was officially charged on three corruption counts by the Israeli Attorney General, a move that many had been expecting for the better part of a year. In addition to the historical significance of the charges, the first time in Israeli history that a sitting Prime Minister has been charged with a crime, the move is politically significant because it comes just under 40 days from elections in which Netanyahu’s party is facing a tougher-than-expected battle for control of the Israeli Parliament, a battle that is likely to be impacted by these charges against a man who has served as Prime Minister for the past decade. In response to that, Netanyahu is clearly banking on the support of his right-wing base to survive politically even as he faces the prospect of heading to trial on criminal charges:

TEL AVIV—Israeli Prime Minister Benjamin Netanyahu is betting his political survival on a dedicated base of conservative voters ignoring potential bribery charges that could undo his bid for a fifth term.

All but one of his current coalition partners threw their support behind Mr. Netanyahu after Israeli Attorney General Avichai Mandelblit’s decision Thursday to charge the prime minister with bribery, fraud and breach of trust, pending a hearing. The allegations include charges that Mr. Netanyahu tried to influence media coverage of him and his family, along with accepting gifts from two billionaire businessmen in return for favors.

But interviews with voters in some of Mr. Netanyahu’s political strongholds showed that few of his staunch backers were willing to abandon him over the charges, which he denies.

“There have been a number of police investigations against politicians in this country that have come to nothing,” said Dina Shalit, 70 years old, a resident of Ariel, a Jewish settlement in the occupied West Bank, where Mr. Netanyahu is popular. “I still think there’s no alternative.”

Still, Mr. Netanyahu has little margin of error over the next five weeks in his bid to become Israel’s longest-serving prime minister in the April 9 early election he called late last year. He faces one of his toughest-ever political challenges from former Israeli military chief Benny Gantz and television presenter turned lawmaker Yair Lapid, who joined forces last week.

A poll Friday from a pro-Netanyahu daily newspaper found the prime minister had lost support but was still best-positioned to form a government with right-wing and ultraorthodox parties securing a majority of seats. However, a Times of Israel poll released early Thursday showed that the charges could swing enough voters to a center-left bloc led by Messrs. Gantz and Lapid.

[M]ost political experts agree that the election will come down to whether some right-leaning voters abandon Mr. Netanyahu for Messrs. Gantz and Lapid, and then after the election whether they can get any of the traditional parties of the right-wing bloc to break away.

Mr. Netanyahu has spent months appealing to his base in anticipation of Thursday’s decision, telling supporters a series of corruption probes were a left-wing, media-driven conspiracy to take down his right-wing government. In a prime time speech on Thursday, Mr. Netanyahu defiantly addressed his base and pointed to his relationships with President Donald Trump and Russian President Vladimir Putin as reasons not to abandon him now.

“I intend to serve you for many more years,” said Mr. Netanyahu, who has been prime minister for three consecutive terms since 2009. “But it depends on you. It does not depend on the officials or the studios. It depends only on you, the citizens of Israel.”

Gideon Rahat, a political-science professor at Hebrew University and a senior fellow at the Israel Democracy Institute, said Mr. Netanyahu benefits from an electorate that has drifted rightward for two decades after the second Palestinian Intifada in 2000. The uprising grew out of the collapse of the left-wing-led peace process, inflicting frequent terrorist attacks inside of Israel and prompting a forceful response from the Israelis.

“The second Palestinian uprising is a breaking point of many Israelis,” Mr. Rahat said. Mr. Netanyahu has convinced many voters that the “left is something bad, it’s not Jewish, it’s naive,” he said.

Mr. Netanyahu has taken a series of steps in recent weeks to keep his right-wing bloc of voters together.

He brokered a deal between the anti-Arab extremist Jewish Power, an anti-democratic party viewed by many in Israel as racist, and right-wing Jewish Home parties, promising them senior government positions so that they would run together and rise above an electoral threshold that puts them in the Israeli parliament, the Knesset. The move sparked criticism from Israeli religious leaders and the American Israel Public Affairs Committee and other American Jewish organizations.

Notwithstanding recent polling showing that the main opposition party would garner more seats in the Israeli Parliament than Netanyahu’s Likud Party, the odds still seem to be in favor of his being able to stay in power despite the fact that he has three serious corruption charges pending against him. The main reason for this is that, even in the polling that has taken place contemporaneously with the filing of charges, neither Likud nor the party being led by former Army Chief of Staff Lt. General Benny Gantz appear likely to come close to winning enough seats to constitute a majority in the 120 seat Knesset. This ends up being an advantage for Netanyahu since it would appear to be much easier for him to cobble together a coalition government constituting a governing majority than it would be for Gantz thanks to the fact that Netanyahu would likely be able to depend on the support of the group of right-wing and Orthodox political parties that he has depended on the past to form a governing majority. Gantz, on the other hand, would have a much harder time putting together such a coalition unless his party manages to do much better in the elections than current polling is indicating they will. This, of course, is one of the main reasons that Netanyahu is responding to the charges against him by reaching out to these right-wing parties to ensure that he will have their support after the election.

None of this guarantees, of course, that Netanyahu will hold on to power after April 9th, of course. The filing of charges against him could be the last straw for many Israeli voters after ten years of Netanyahu in power, and that could lead Gantz and those supporting him to get close enough to the 61 seats they need to form a government to gain power and leave the Prime Minister on the sidelines for the first time in a decade. Whatever the outcome, though, as Zev Chafets notes in Bloomberg article, Netanyahu is unlikely to go quietly:

Chances are that Bibi will pull off an electoral victory despite the charges. His party base is unquestioningly loyal. His voters share their leader’s low opinion of government prosecutors and their supporters in the media and certain official circles. This is also true of his right-wing coalition partners, all but one of whom have pledged solidarity (and more than one of whom has had serious legal trouble of their own).

Netanyahu’s center-left opposition is led by an inexperienced ex-general, Benny Gantz, whose immediate reaction to the charges was to declare that he won’t serve in any government that has Netanyahu in it. This may be laudable civics but it is terrible politics. Statistically, it will be almost impossible for the center-left to form a government without Bibi.

If Gantz is serious about his vow, there are two likely outcomes.  Netanyahu can weather the legal storm and re-establish his coalition after a narrow electoral win. Or there could be an electoral stalemate that leads to post-election chaos. When that happened in the U.S., in 2000, the Supreme Court decided the outcome. But Netanyahu has already made it clear that he believes the courts are fixed against him, and any attempt to give Israel’s highest court the final say would be met with resistance.

Were that to happen, Netanyahu would appeal to “the people” (aka his most extreme supporters) in the public squares. He has already laid out the case that he is the victim of an elitist conspiracy: Gantz is a stalking horse for appeasers who want to make irresponsible concessions to the Palestinians and the Iranians, it goes. A Gantz government would rely on the passive support of the anti-Zionist Arab parties, Netanyahu says. Now is the time for patriots to rally for the good of their country!

If the indictment is a sign, as Noah Feldman wrote on Friday, that Israeli democracy is working, Netanyahu’s response is a warning that it can also be subverted. It is an invitation to wild demonstrations, which clearly bring the prospect of violence. Gantz and the other leaders of the left-center bloc would be pressured by their voters to respond in kind, to get into a street fight that they can never win.

Should Gantz continue to rule out a coalition, the only alternative in the case of an electoral draw would be to rely on the justice system. But time is on Bibi’s side. It could take years to exhaust the various appeals processes he will use to keep the issue tied up in the courts. In the meantime, he could remain prime minister.

With the election just a bit more than a month away, there’s unlikely to be anything happening on the legal front that could impact the outcome significantly. As several articles on the charges against the Prime Minister have noted, due to the sometimes slow manner in which the Israeli justice system works, it could be some time before there are any additional developments in the case against Netanyahu or in the charges that were filed last summer against Netanyahu’s wife Sara alleging improper activity with respect to the expense accounts utilized by Prime Ministers.

What all this means, of course, is that the future is really in the hands of Israeli voters and much will depend on how they react to these charges against the man who has served as their Prime Minister for the past ten years and who has been a fixture in Israeli politics for longer than that. If they believe that the charges are serious enough that it’s time for him to go, then this will likely benefit Gantz and his party and whatever smaller parties throw their support behind him in the coming weeks. If they don’t then it’s likely that, notwithstanding that fact that his own party is likely to lose support in the Knesset once the final results are in, Netanyahu will once again be in the better position to cobble together a governing coalition going forward. The other possibilities, of course, are that Netanyahu and Gantz will be forced to enter into a coalition of their own if neither one of them is able to get the 61 seats necessary to make up a majority in Parliament or that Israel will end up with a stalemate that will require the scheduling of a new round of elections that would hopefully result in either Gantz or Netanyahu coming out on top. In the end, though, it’s worth noting that Netanyahu has survived challenges like this before and managed to come out on top, so I wouldn’t count him out by any means.