While unemployment remains stubbornly high, Washington is spending its time fighting over the budget deficit 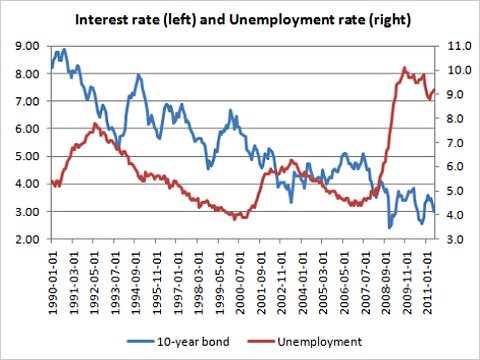 And therein lies the point: the blue keeps going down. Indeed, it hasn’t been this low in many decades. If the deficit were a drag on the economy, and the United States were facing some sort of debt crisis, that blue line would be through the roof. But that’s not even close to what’s happening.

Instead, we have that red line to contend with, which translates to a jobs crisis.

The only topic of conversation in Washington right now is a debt-reduction deal, which intends to address that blue line. But there’s no need to address the problem that doesn’t exist. There’s a critical need to address the problem that does — the red line — but thanks to GOP gains and the Republican majority in the House — there’s no political will to do so. On the contrary, Republicans have said if Democrats don’t agree to massive debt reduction — i.e., taking more money out of the economy when it needs the opposite — the GOP will crash the economy on purpose.

Right off the bat,  Benen and Krugman both miss a point about the deficit by concentrating solely on current T-Bill interest rates. If we wait until interest rates start to rise to deal with the structural deficit, then its likely to be both much more expensive and too late. Former Fed Governor Laurence Lindsey explained a few weeks ago in The Wall Street Journal why dealing with the deficit now is important:

First, a normalization of interest rates would upend any budgetary deal if and when one should occur. At present, the average cost of Treasury borrowing is 2.5%. The average over the last two decades was 5.7%. Should we ramp up to the higher number, annual interest expenses would be roughly $420 billion higher in 2014 and $700 billion higher in 2020.

The 10-year rise in interest expense would be $4.9 trillion higher under “normalized” rates than under the current cost of borrowing. Compare that to the $2 trillion estimate of what the current talks about long-term deficit reduction may produce, and it becomes obvious that the gains from the current deficit-reduction efforts could be wiped out by normalization in the bond market.

The second reason for concern is that official growth forecasts are much higher than what the academic consensus believes we should expect after a financial crisis. That consensus holds that economies tend to return to trend growth of about 2.5%, without ever recapturing what was lost in the downturn.

But the president’s budget of February 2011 projects economic growth of 4% in 2012, 4.5% in 2013, and 4.2% in 2014. That budget also estimates that the 10-year budget cost of missing the growth estimate by just one point for one year is $750 billion. So, if we just grow at trend those three years, we will miss the president’s forecast by a cumulative 5.2 percentage points and—using the numbers provided in his budget—incur additional debt of $4 trillion. That is the equivalent of all of the 10-year savings in Congressman Paul Ryan’s budget, passed by the House in April, or in the Bowles-Simpson budget plan.

Third, it is increasingly clear that the long-run cost estimates of ObamaCare were well short of the mark because of the incentive that employers will have under that plan to end private coverage and put employees on the public system. Health and Human Services Secretary Kathleen Sebelius has already issued 1,400 waivers from the act’s regulations for employers as large as McDonald’s to stop them from dumping their employees’ coverage.

But a recent McKinsey survey, for example, found that 30% of employers with plans will likely take advantage of the system, with half of the more knowledgeable ones planning to do so. If this survey proves correct, the extra bill for taxpayers would be roughly $74 billion in 2014 rising to $85 billion in 2019, thanks to the subsidies provided to individuals and families purchasing coverage in the government’s insurance exchanges.

Waiting until after interest rates start to go up to deal with the deficit, then, would be the equivalent of installing a sprinkler system after the building as already engulfed in flames. Too little, too late. We are in the very fortunate position right now of having historically low interest rates, but that’s not going to last forever. When that period ends, the cost of borrowing and the cost of simply maintaining the public debt will increase astronomically, and the chances of being able to pull together a deal at that point are slim to none. Either Krguman and Benan don’t recognize this or they don’t particularly care, which is it?

The most likely answer is the second one, because Krguman is clearly among those people who thinks that the answer to our current economic troubles is more spending, even though there’s absolutely no evidence that the last round of stimulus did anything at all to invigorate the economy. From an economic point of view its clear that more spending isn’t the answer to our problem:

Since 2008, we’ve had a rather lengthy experiment in elevated federal spending intended to address unemployment. Yet, our current unemployment rate is even higher than what the Obama Administration said would have happened in the absence of “stimulus,” let alone where it promised the unemployment rate would be.

Of course, the Krugman school of faith-based economics has a response: the “stimulus” package was never big enough in the first place.  This is a very convenient argument since it is non-falsifiable.  No matter how many trillions of new T-Bills we print with no effect at all on the unemployment rate (because the lack of available cash isn’t the reason that businesses are reluctant to hire), the Krugmans of the world can always claim that at some magical point of just a little more it would have worked.  Then they can just keep pointing fingers for the failure of their own undertheorized economic theory.

At the same time, I think there’s some truth to the observation that Washington is ignoring the economic forest for the trees. In the minds of most Americans, the biggest issue isn’t what happens to the budget deficits, but what happens to jobs and the economy. Right now, neither party seems to be addressing those concerns very well.  In yesterday’s post about the June jobs report, I made this observation:

We’ve known since November that voters top concern during the mid-term elections was jobs, jobs, jobs. Somehow, though, the conversation in Washington has turned to austerity and spending cuts. If you listen to Republicans on television, they keep repeating the line that getting government spending under control will create jobs, but I’ve never quite understood where the logic in that argument comes from. If the government spends less, how, exactly does that lead to a stronger economy? How does it put money in the hands of businesses that they’d be willing to use to expand, develop new lines of business, and hire new workers? Moreover, if spending cuts lead to government workers losing their jobs, doesn’t that mean unemployment is going to go up, at least in the short term?

Reducing uncertainty over the debt ceiling and government spending will no doubt reduce general business uncertainty, and that will likely help stimulate growth to some degree, but there’s a lot more that Washington can do to help stimulate the economy. There are changes in tax policy, reducing regulations, and a whole host of other policy changes that could be made that will help in that regard. But none of that is even being discussed right now, and its unlikely to even be considered until the debt deal is completed. Politically, though, I’m not sure that this is the smartest thing for either party to be doing. Frustration with Congress is already high, and it’s only likely to get higher if the public starts to think that Washington isn’t addressing the problems that concern them the most.