John Kelly Has Basically Given Up Trying To Manage Trump

John Kelly is nearing the end of his first year as White House Chief of Staff, and it's becoming apparent that his mission to bring order to a disordered White House has failed. 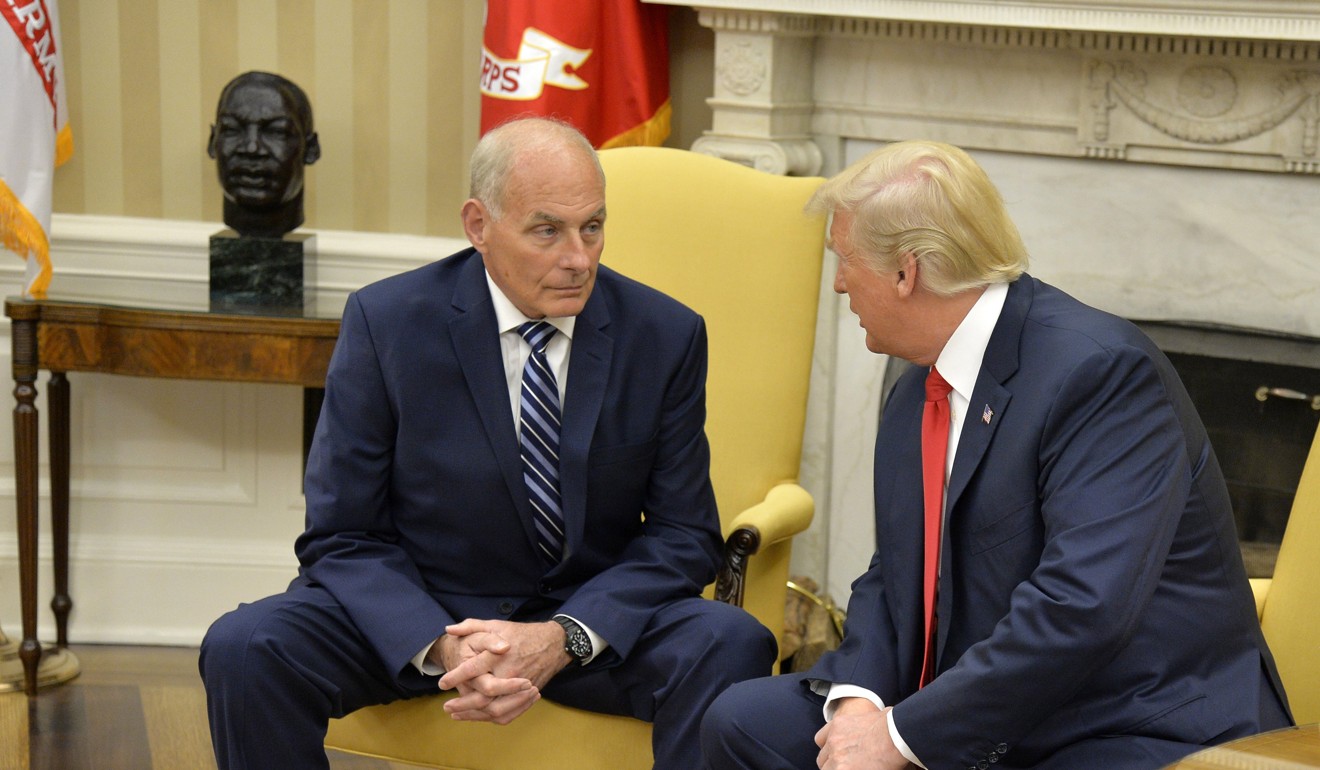 We’re approaching the one year anniversary of John Kelly’s appointment as White House Chief of Staff. At the time he was named to replace Reince Priebus, there were many who anticipated that the former General and Secretary of Homeland Security would bring a sense of order and normalcy to the White House that had been noticeably lacking in the first six months or so of the Administration. At least initially, it seemed from the outside that the retired General was succeeding in that regard at least in some respects. For example, Kelly had quickly put an end to the “open door” policy that had existed under Priebus that meant that essentially anyone with the proper clearance could enter the Oval Office to talk to the President without the Chief of Staff or any other official knowing about it. Additionally, he had reportedly gotten the paper flow issues under control to the extent that it became less common that papers or press clippings did not end up before the President without being reviewed by either the Chief of Staff or the Staff Secretary. Kelly also managed to push to the side troublesome Presidential advisers such as Anthony Scaramucci, Steve Bannon, Sebastian Gorka, and Omarosa Manigault,  the former Apprentice contestant who had bizarrely fallen into Trump’s orbit and earned a position in the White House and who was dismissed from her position in what appeared to be unusual and dramatic circumstances.

Even with these reforms, though, things in the Trump White House didn’t change noticeably. The President continued to tweet at all hours of the day, for example, and he continued to watch cable news late at night rather than reviewing briefing books provided to him by White House Staff as had been President Obama’s practice. He also continued to use his personal phone to reach out to friends and unofficial advisers behind Kelly’s back and would end up being heavily influenced by these contacts to the point where whatever control Kelly had gained over the functioning of the White House soon eroded and he found himself often shut out of important events, including calls to foreign leaders that in past Administration’s Chiefs of Staff would generally be included on in at least a listening capacity.  The result of this, inevitably, is that Trump soon returned to his old ways, resulting in repeated confrontations between the President and his Chiefs of Staff that, according to reports, sometimes devolved into shouting matches between the two.

Now, Politico reports that Kelly has basically given up trying to manage Trump:

Kelly’s status in the White House has changed in recent months, and he and the president are now seen as barely tolerating one another. According to four people close to Kelly, the former Marine general has largely yielded his role as the enforcer in the West Wing as his relationship with Trump has soured. While Kelly himself once believed he stood between Trump and chaos, he has told at least one person close to him that he may as well let the president do what he wants, even if it leads to impeachment — at least this chapter of American history would come to a close.

In recent months, his Secret Service detail has often been spotted standing outside the gym in the Eisenhower Executive Office Building in the middle of the day — and White House officials who pass it on the way to meetings view his late morning workouts as an indication of him having thrown in the towel on trying to have any control inside the West Wing.

This latest report is not the first indication that Kelly’s mission to bring order to the White House in general and the President in particular. The first sign of that, of course, came in the wake of the events last summer in Charlottesville when the President repeatedly sought to excuse the hate and violence that was on display that day. As early as the beginning of September of last year, for example, it was reported that the Kelly was already starting to lose control of the White House and the President and some rumors began to circulate that Kelly might be on his way out sooner rather than later. When the new year rolled around, though, things seemed to start going downhill. In February, it was reported that Trump was considering ousting Kelly and was actually talking behind Kelly’s back to potential replacements, including some corporate CEOs who have been among his small circle of friends. In March, it was reported that Trump was considering a future White House where there would either be no Chief of Staff at all or one that held the title but lacked real power, meaning that Trump would essentially be his own Chief of Staff. Additionally, the past several months have included several different reports of Kelly’s continued humiliation by Trump as well as reports of those aforementioned incidents of the two men shouting at each other, including one in which Kelly reportedly called the President an “idiot” in conversations with aides. At one point, it was even reported that Trump was thinking of sending Kelly to head the Department of Veterans Affairs after the nomination of White House physician Ronny Jackson fell apart, but that never materialized. Taking all that into account, the fact that Kelly has essentially given up even trying to operate like a normal White House Chief of Staff is hardly surprising.

Indeed, when Kelly was named as Priebus’s replacement, I made this observation:

Kelly is seen as a beacon of discipline and it’s likely that part of Trump’s hope is that his presence in the West Wing will lead to less chaos than the Administration has seen since the beginning of its tenure in January. For that to happen, though, it seems clear that the Kelly will have to deal with much of the same issues that Priebus did. Regardless of how much respect Trump might have for the former miltary officer, for example, it’s unlikely that he’ll ever have as much influence over Trump as his daughter and son-in-law do, and the fact that he’ll also have to deal with people like Bannon and Scarmucci makes any effort to bring discipline to a clearly undisciplined White House. Most of all, though, any hope of bringing order to the chaos that is the Trump Presidency requires finding a way to rein in the President himself. Nearly every week since he has been President, Trump has managed to undercut the message his own staff is trying to send to the public whether it’s via his constant Twitter activity or something as seemingly simple as a speech to the Boy Scouts of America that ended up resulting in a formal apology from the leaders of the organization itself. This is part of a pattern of behavior that Trump showed long before he ever became a political figure or a candidate for office, and it has held up throughout the early months of his Presidency. The idea that anyone is going to rein him in, or to get a 70-year-old man to change how he acts, is silly.

I was, unsurprisingly, correct.

In the context of all of this, it’s worth noting that Kelly has not exactly been the moderating force that many thought he would be, and in several cases shown that he shares the President’s policy goals. Last October, for example, when the widow of a soldier killed in Niger came forward to tell her story about what she interpreted as a cold, callous phone call from the President after her husband’s death, Kelly came to the President’s defense by attacking the Florida Congresswoman who was a party to the phone call and the apparent source of the widow’s complaint to the media. In the course of that attack, though, Kelly got several facts wrong and, when this was pointed out, White House Press Secretary essentially said that the press had no business questioning the testimony of a retired General. Additionally, in the wake of the current political controversy, it’s also worth noting that, both when he was Secretary of Homeland Security and now in his role as Chief of Staff, Kelly defended the idea of separating parents and children at the border as a way to “send a message” to border crossers. He has also said that immigrants “don’t have skills” and can’t “easily assimilate” into American culture, a strong indication that he shares the President’s point of view on immigration. Given that, it’s hard to feel sorry for him. He knew what he was signing up for, and he largely supports the agenda that Trump is pushing.

That being said, these latest reports would seem to indicate several things. First of all, we’re likely at the point where we’re closer to the end of Kelly’s tenure than we are to the beginning. Part of this is due to the fact that, under previous Presidents, the turnover among Chiefs of Staff has been fairly frequent and there are very few who have lasted in the job more than two years. Additionally, it seems apparent that if the Republican Party has a bad midterm performance, which seems likely, that President Trump could use that as an opportunity to clean house at the White House, with Kelly being at the top of the list. Finally, it seems apparent that Kelly is likely to reach his own personal breaking point before Trump gets a chance to fire him. In any case, when Kelly does go, it seems clear that it doesn’t matter who Trump replaces him with. Nobody can control this White House as long as Donald Trump is President, and the nation is likely to continue to suffer because of that.