The president's job approval is down. And it's also up!

Yesterday’s post “Obama Approval at Record Low” expressed bemusement that the president’s job approval had plummeted in two major polls, ostensibly because of higher gas prices. A flurry of other surveys, however, fail to show that drop and one, the Reuters/Ipsos poll, shows a slight rise.

For the first time since early July, more Americans approve of the job President Barack Obama is doing than disapprove, according to a new Reuters/Ipsos poll that shows his approval rating now at 50 percent.

The poll, taken March 8-11 on the heels of reports that 227,000 jobs were added to the U.S. economy in February, indicates that Obama’s rating has risen by 2 percentage points during the past month. The percentage of Americans who disapprove of the Democratic president was 48 percent, down from 49 percent in February.

Some other polls have shown a recent dip in Obama’s approval rating, and linked that to rising gasoline prices.

But for most Americans, other economic trends during the past month have been relatively positive. Obama appears to be benefiting from that, and perhaps from a bitter Republican presidential campaign that at times has focused on divisive social issues such as abortion.

Pollster.com’s Emily Swanson (“President Barack Obama Approval Rating Drops In Two Polls, Remains Steady On Others“) attributes much of this variation to “statistical noise.” Ultimately, she sees a modest but perhaps statistically irrelevant dip taking place: “By customizing the Huffpost Pollster chart to be more sensitive to the most recent polls, the trend shows signs of a slight downturn in Obama’s approval since February, when most pollsters showed his approval ratings at a particularly high point.”

Nate Silver initially sides with the “statistical noise” analysis as well but amends it in light of his own paper’s poll “which had President Obama’s approval ratings dropping all the way down to 41 percent. That certainly weighs the evidence more in the direction of Mr. Obama’s numbers having declined from their February peaks — and makes November’s election look more like a toss-up than one that leans toward Mr. Obama.”

The RealClearPolitics poll of polls shows a distinct but small dip in popularity and rise in disapproval–but within a range where Obama has been mired since August 2010. 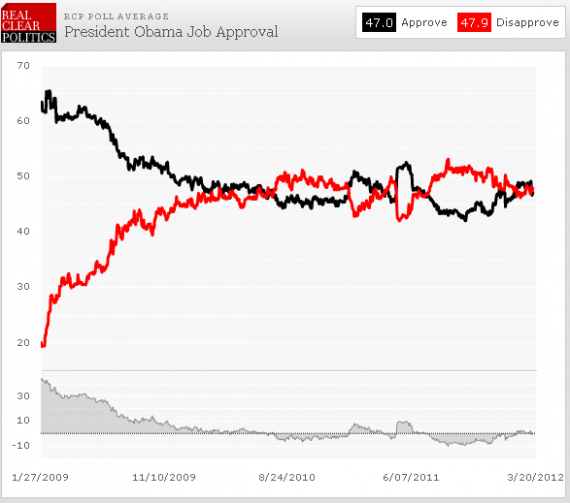 The individual polls show substantial variation, ranging from a spread of +5 to -6, but the approval and disapproval numbers are both within spitting distance of 50 in all of the polls.

Silver also notes that “Timing can also be a factor: the Monday Gallup poll, for instance, was conducted entirely over the weekend, after the relatively good February jobs report had been published. It’s possible that made some difference, but who knows. In the long-run, a poll published 238 days before an election is not going to be much more accurate than one conducted 236 days before the election — unless there has been some fundamental shift in the political environment.”

“Who knows” may indeed be the best takeaway here.