Republicans Raise Specter Of Impeachment In Effort To Motivate Their Base

Republicans are raising the fear of impeachment to motivate a base that could become disaffected heading into November. 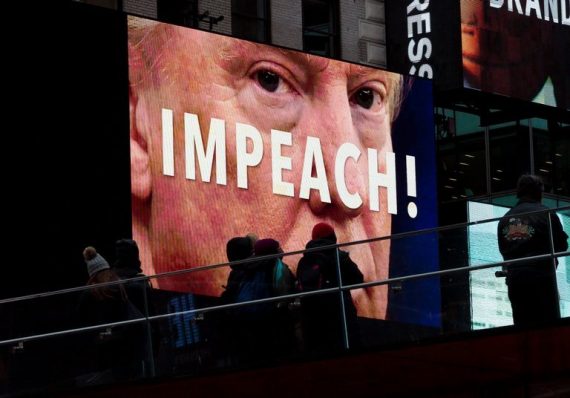 With the signs for the 2018 midterms looking increasingly grim, New York Times reporter Jonathan Martin notes that Republicans are likely to rely on the fear of impeachment proceedings as a way to motivate a base that could become disillusioned as we get closer to November:

WASHINGTON — As Republican leaders scramble to stave off a Democratic wave or at least mitigate their party’s losses in November, a strategy is emerging on the right for how to energize conservatives and drive a wedge between the anti-Trump left and moderate voters: warn that Democrats will immediately move to impeach President Trump if they capture the House.

What began last year as blaring political hyperbole on the right — the stuff of bold-lettered direct mail fund-raising pitches from little-known groups warning of a looming American “coup” — is now steadily drifting into the main currents of the 2018 message for Republicans.

The appeals have become a surefire way for candidates to raise small contributions from grass-roots conservatives who are devoted to Mr. Trump, veteran Republican fund-raisers say. But party strategists also believe that floating the possibility of impeachment can also act as a sort of scared-straight motivational tool for turnout. Last week, Senator Ted Cruz of Texas used his re-election kickoff rally to introduce a video featuring a faux news anchor reading would-be headlines were conservatives not to vote in November.

“Senate Majority Leader Schumer announced the impeachment trial of President Trump,” one of the anchors says.

And when Representative Steve Stivers of Ohio, the chairman of the House Republican campaign organization, convened about two dozen party strategists in February for a private dinner at a French bistro here, the attendees were surprised when he addressed an issue not included in his formal PowerPoint presentation: the threat of impeachment against Mr. Trump, which he said fired up the party base.

Then there is the most prominent Republican to have started invoking the specter of a Democratic-controlled House impeaching Mr. Trump: the president himself. In just the last month, he has used three separate speeches to warn that Representative Maxine Waters, a veteran California Democrat he has casually insulted as a “low-I.Q. individual,” aims to impeach him.

Advisers to the president say they have made clear to him that Republican control of the House is tenuous, and some have encouraged him to more aggressively lay out the stakes for the midterm elections, including who exactly would be in charge of key committees should Democrats retake the chamber.

“Everybody has told him that,” Corey Lewandowski, Mr. Trump’s former campaign manager, said about the prospect of a Democratic takeover of the House. “The threat of impeachment is something that unifies everybody in the party, even if you’re not a big Trump supporter.”

Democrats are divided on how to respond to the charge. Many top officials in the capital fear it is a political trap that would distract from their core message and possibly even boomerang back to harm them in November. But other more progressive figures see impeachment as a rallying cry of their own to galvanize the left’s anti-Trump base.

“I’ve been urging members to refrain from discussing impeachment,” said Representative Adam Schiff of California, the ranking Democrat on the House Intelligence Committee, adding: “I think we should let these investigations conclude and see what evidence is found.”

The mere thought of impeachment could energize Trump supporters who may otherwise be disinclined to vote in the midterm elections without him on the ballot, supporters of the strategy say.

So far at least, Democrats have been mostly silent on the issue of impeachment outside of a small cadre of hard leftists who have been talking about the idea from virtually the first day that Trump took office. One reason for that, obviously, is that veteran Democrats are as good at reading political tea leaves as everyone else:

The Democratic leadership, though, has sought to tamp down these impulses. They believe Republicans are setting a trap and are irritated that the billionaire donor Tom Steyer, who recently said he wants to host a series of primary debates this year, is trumpeting the issue. These Democrats argue that the party needs to focus on a substantive agenda and assure voters that they will exercise sober and reasonable oversight of Mr. Trump.

On Thursday, the House Democratic campaign organization released a memo based on an internal poll that urged candidates to “express a willingness to work with the president when his agenda might help the district.”

“If impeachment becomes a political tool instead of the end result of a credible investigation, then you are as guilty as Trump, in some ways, of taking a hammer blow to institutions,” said David Axelrod, former President Barack Obama’s onetime chief strategist, adding that it would also create risks in swing districts. “To say I’m for impeachment come hell or high water is to promise chaos.”

And Democratic lawmakers say they are wise to the bait that Mr. Trump is placing before them when he invokes Ms. Waters, an outspoken black woman whose jeremiads against the president conservative media outlets delight in amplifying.

“They’re trying to encourage us to be more out front on impeachment so then they can use that to rev up their base and say, ‘That’s all the Democrats care about,'” said Representative Dina Titus of Nevada, a political-science professor by training.

Democrats are wise to be cautious on the issue of impeachment as we head closer to November for a number of reasons.

First of all, there’s the fact that, at least based on what we know now, there’s no real evidence to support anything that could plausibly be said to give rise to the kind of “high crime” or “misdemeanor” that would be the subject of an impeachment charge. Sure, Trump is proving to be an erratic, irrational, crude, rude, and arguably incompetent President but these are generally not considered impeachable offenses and seeking to use the heavy hammer of impeachment for reasons like this would be as blatantly political as the Clinton impeachment. Even in that case, though, Republicans could point to strong evidence that the President had committed perjury which is, of course, a crime under both Federal and state law. So far, there is no such evidence against Trump and banging the impeachment drum ahead of the 2018 midterms could potentially backfire by both motivating Republicans who might otherwise be disaffected to head to the polls and by establishing expectations among Democratic voters that a Democratic Congress would be unable to meet. That could pose problems for Democrats in 2020.

Additionally, any consideration of impeachment at any point ought to take into account the likelihood of whether or not it could potentially lead to removal from office. One of the biggest problems with the Republican-led impeachment of President Clinton, for example, was the fact that it was obvious from the start that there would not be a sufficient two-thirds majority in the Senate to convict Clinton on either of the charges against him, thus making the entire exercise seem to be even more obviously partisan than it already was. The same is likely to be true in this case unless there is some kind of smoking gun evidence that would cause enough Republican Senators to convict the President. That evidence doesn’t exist right now and, unless it comes into being, impeachment under any circumstances would arguably be politically unwise since an acquittal in the Senate would likely strengthen Trump’s hand heading into the 2020 elections.

Much of this could change, of course, depending on the outcome of Robert Mueller’s Russia investigation. At this point in time, though, it seems clear that this investigation is not likely to be completed prior to the election, and may not be wrapped up until well into 2019. Moreover, even when the investigation is finished it’s not clear if whatever report Mueller prepares will end up being made public at all. As a first step, that report will be presented to Deputy Attorney General Rod Rosenstein and it would be up to him to decide what to do with that report. Rosenstein could decide, for example, to make the report publicly available immediately, or he could decide to turn it over to Congress with the understanding that the report will remain classified until such time as a decision to declassify it is made. Alternatively, Rosenstein could decide to keep the report in-house and not make it public or turn it over to Congress, although that seems unlikely given the nature of the investigation and the concerns it is likely to raise vis a vis national security at the very least. All of that, though, is a long way off and is not likely to be decided before November.

All of this notwithstanding, raising the fear of impeachment is an entirely understandable strategy on the right. As things stand, Republican voters are likely to head into the midterms discouraged by what many perceive as a lack of accomplishments even though the GOP controls both the Executive and Legislative Branches. This discouragement is only likely to increase if polls continue to show, as they do now, good news for the Democrats on the Congressional front and bad news for the President on the job approval front. If they come to believe that staying home on Election Day could mean making impeachment more likely, even if that isn’t entirely true, then they are more likely to turn out to vote and, of course, to donate to Republican campaigns between now and November. So, expect the specter of impeachment to be something the GOP falls back over the coming months. Democrats would be wise to avoid the issue entirely and not take the bait.