State-level job approval numbers seem to suggest that the President could have Electoral College worries in 2012. 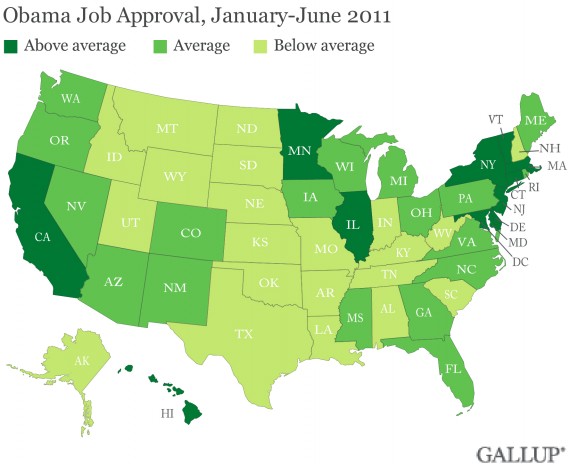 Keeping in mind the caveat that James Joyner noted last week that it may well be ridiculously early to start looking at Electoral College scenarios  for the 2012 election, National Journal notes that a new set of state polls from Gallup seems to indicate that the President will have a tougher time putting together a winning Electoral College map this time around:

Newly released state-by-state approval numbers for President Obama suggest that in 2012 he could face fewer options for assembling an Electoral College majority and increased pressure to capture racially diverse states. As a result, Colorado, Virginia, North Carolina, and Florida, among others, appear to be evolving into critical battlegrounds on the campaign map.

The polling results, released earlier this week by Gallup, underscore both the stability of each party’s Electoral College base and the shifting roster of swing states that could decide the 2012 contest.

The bad news for the President, though, is that his approval rating is slipping and, if that continues to happen, he could have a real problem getting to 270:

If Obama’s national approval rating next fall remains around its current 42 percent, it’s almost inconceivable that he could win enough states to assemble an Electoral College majority. But if the president manages to restore his national approval rating to at least the 47 percent level reflected in the Gallup results, the state-level breakdown offers a preview of what the map might look like in a competitive race.

At that level of national support, the Gallup numbers show, Obama’s potential 2012 map features elements of stability — albeit, at a lower baseline than in 2008. Obama’s approval rating in the Gallup compilation trailed his 2008 share of the vote in every state except Alaska, Louisiana, Mississippi and, intriguingly, Georgia.  Most of the sharpest declines have come in states that Obama won last time, including New Hampshire, Oregon, Rhode Island, Vermont, New Mexico, and Nevada.

Chris Cillizza looks as the numbers and sees the 2012 race coming down to a group of ten swing states, far fewer than were in play in 2008:

New Gallup numbers tracking President Obama’s job approval rating in each of the 50 states makes clear that the 2012 election will almost certainly come down to ten swing states.

In each of those ten states — Iowa, Pennsylvania, Florida, North Carolina, Virginia, New Mexico, Ohio, Nevada, Arizona and Colorado — the President’s approval rating is somewhere between 44 percent and 49 percent.

All told, the states will dole out 148 electoral votes, more than half of the 270 total that either nominee will need to claim the presidency next November. In 2008, Obama won nine of the ten — losing Arizona due in large part to Sen. John McCain’s homestate appeal.

Frankly, I cannot see Arizona being a true swing state. A Democrat hasn’t won Arizona in a Presidential election since 1996, and the state has seemingly become more conservative and more Republican in the years since then, and George W. Bush actually beat John Kerry in 2004 by a slightly wider margin than the one by which John McCain won the state in 2008. Moreover, the continuing immigration controversy in that state, along with the Federal Government’s lawsuit against the what is by all measures a popular law, seems to make it unlikely that the President has a realistic chance of winning that state next year. Nonetheless, the rest of Cillizza’s list seems in order, and the fact that other states that Obama was able to swing into his corner, like Indiana, are not on the list seems to support the idea that the 2012 race is likely to be fought out on a much smaller playing field than the one candidates faced in 2008.

If you’re running a presidential campaign, you obviously need to make choices about where to put resources, and you certainly should be reading the polling, even this early – although it’s likely that you’ll mostly just want to look at the previous cycle. But if you’re trying to predict results, the odds are that you’re going to get far more confused by looking at state data. For example, Gallup is using data collected over six months to keep the margin of error low. But which tells us more about, say, Pennsylvania right now: a six-month average of Pennsylvania respondents, or a good estimate of today’s national approval rating adjusted by the difference between how Obama did nationally in 2008 and how he did in the Keystone State in 2008? My money would be on the latter.

The larger point is that trying to get the states exactly right at this point is mostly a waste of time. If Barack Obama reaches November 2012 with a 40 percent approval rating, he’s toast; if he rallies from his current low-to-mid 40s and tops 50 percent approval, he’ll win.

If, after Labor Day 2012, the national numbers show a very close race . . . that’s about when it’s worth starting to pay attention to the battleground states.

For the most part, Sargent is correct. Using approval numbers to try to post re-election odds is problematic at best, and may be entirely worthless given the fact that there’s no Republican nominee to compare Obama’s numbers to at this point in time. Nonetheless, those numbers do seem to show us that, absent a dramatic turnaround in the economy that boosts the his approval numbers, Barack Obama is going to have a tough time getting to 270 Electoral Votes this time around.