More evidence that President Trump was an active participant in the scheme to silence Karen McDougal and Stormy Daniels in advance of the 2016 election. 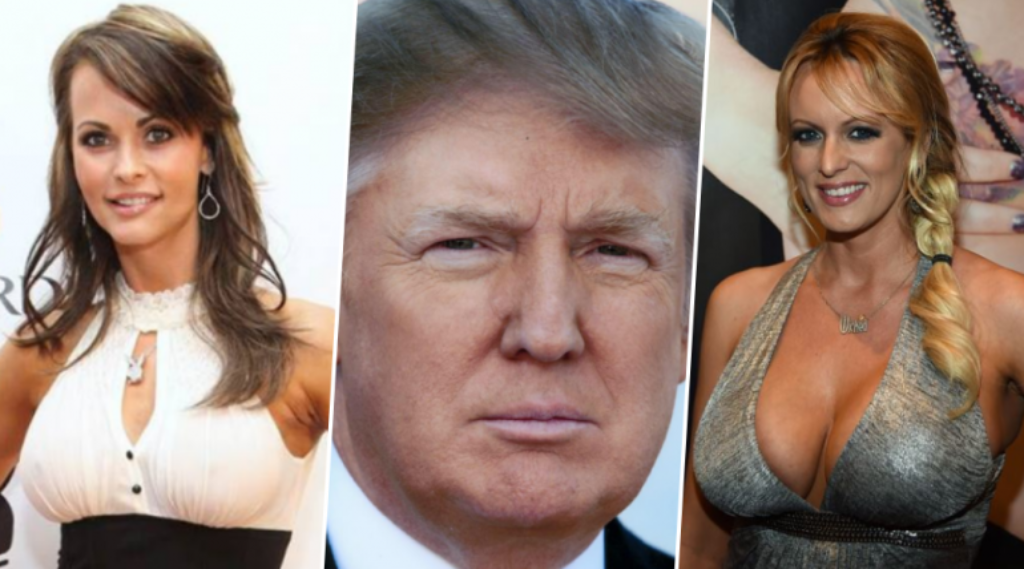 NBC News is reporting that President Trump was in the room when his lawyer Michael Cohen and the publisher of the National Enquirer were discussing how to pay off women who were alleged to have had affairs with Trump and threatening to go public just prior to Election Day in 2016:

Donald Trump was the third person in the room in August 2015 when his lawyer Michael Cohen and National Enquirer publisher David Pecker discussed ways Pecker could help counter negative stories about Trump’s relationships with women, NBC News has confirmed.

As part of a nonprosecution agreement disclosed Wednesday by federal prosecutors, American Media Inc., the Enquirer’s parent company, admitted that “Pecker offered to help deal with negative stories about that presidential candidate’s relationships with women by, among other things, assisting the campaign in identifying such stories so they could be purchased and their publication avoided.”

The “statement of admitted facts” says that AMI admitted making a $150,000 payment “in concert with the campaign,” and says that Pecker, Cohen and “at least one other member of the campaign” were in the meeting. According to a person familiar with the matter, the “other member” was Trump.

Trump was first identified as attending the meeting by The Wall Street Journal.

Daniel Goldman, an NBC News analyst and former assistant U.S. attorney said the agreement doesn’t detail what Trump said and did in the meeting. “But if Trump is now in the room, as early as August of 2015 and in combination with the recording where Trump clearly knows what Cohen is talking about with regarding to David Pecker, you now squarely place Trump in the middle of a conspiracy to commit campaign finance fraud.”

A spokesperson for the U.S. Attorney’s Office for the Southern District of New York, which investigated Cohen’s hush-money payments to Stormy Daniels and Karen McDougal, declined to comment.

When Cohen pleaded guilty to arranging the payments in August, he said he had done so “at the direction” of an unnamed candidate, and that a $150,000 payment prior to the 2016 election was “for the principal purpose of influencing” the election. The meeting between Cohen, Pecker and unnamed other parties to discuss suppressing stories was referenced in the criminal information document to which Cohen pleaded guilty. The document also refers to “at least one other member of the campaign” being present.

The statement of admitted facts says that AMI’s “principal purpose in making the payment was to suppress the woman’s story so as to prevent it from influencing the election.” Rudy Giuliani, a lawyer for the president, has said the payments were made to spare Trump’s family from embarrassment.

The most interesting thing to note about this report is the timing, which indicates that Trump, Cohen, and Pecker were discussing as early as the summer of 2015, shortly after the President became a candidate for office, the manner by which AMI could help the Trump campaign keep women who might come forward to make accusations against Trump during the course of the campaign quiet. This raises the possibility, obviously, that there may have been other women in addition to McDougal and Daniels who were paid in some way to keep quiet in an effort to protect the campaign. If that is the case, then one can presume that Cohen and/or Pecker, or both, have revealed the identity of these women to Justice Department investigators and provided them with documentation with regard to any such transactions. So far, of course, only McDougal and Daniels have gone public but there have been rumors of other women out there who are under similar agreements to those signed by McDougal and Daniels who have yet to come forward.

This news comes just a day after it was reported that AMI had reached a cooperation agreement with the Justice Department under which it agreed to cooperate with the ongoing investigation into the payments that were made to McDougal and former adult film star Stormy Daniels to keep them quiet about their affairs with Trump a decade earlier. The day before that, Trump attorney and “fixer,” who was at the center of both payment arrangements, was sentenced to three years in prison in part for his admissions regarding his role in both the McDougal and Daniels payments. In that respect, the importance of this revelation cannot be understated because it is in many ways the final piece of a puzzle that has been slowly coming together for the better part of the past year.

The saga began, of course, in October 2016 when separate agreements were reached with adult film star Stormy Daniels and Playboy model Karen McDougal under which the women were paid $130,000 and $150,000 respectively in exchange for their silence regarding sexual relationships they had with Trump in 2006 when Melania Trump was pregnant with their son Barron. From the beginning, it was known that Michael Cohen, Trump’s long-time attorney, was at the heart of both matters. With respect to the payment to Daniels, of course, Cohen was revealed to have been the source of the funds that were paid to Daniels, while the funds paid to McDougal came from AMI in the form of a scheme under which the company bought the rights to McDougal’s story with the understanding, at least on its part, that they would never be made public.

With respect to the Daniels payment, Cohen claimed at the beginning that the President was unaware of those payments and stated that the Daniels payment specifically was made without the President’s knowledge using Cohen’s personal funds, an act for which Cohen was never personally reimbursed. The President, of course, repeated these denials at least until his personal attorney Rudy Guiliani acknowledged that the President knew about the payoff to Daniels and that he had reimbursed Cohen for the $130,000 that was paid to Daniels. Subsequently, recordings that Cohen had made of a conversation with Trump revealed that the then-candidate was aware of the ongoing negotiations regarding a similar payoff to McDougal. Later, Cohen admitted that he did not choose to pursue an agreement with Stormy Daniels until after the release of the Access Hollywood tape, a development that makes it far more likely that this payoff to Daniels, as well as the contemporaneous payoff to McDougal, was made to benefit the Trump campaign rather than protect the Trump marriage or shield Melania Trump from embarrassment. This made both contributions, neither one of which was authorized by or properly reported to the Federal Election Commission, violations of the law that could subject both Trump and Cohen, as well as various people involved in the Trump campaign potentially subject to both civil and criminal charges.

Cohen pled guilty to these charges in August. In his plea, he admitted that his involvement in the payments to purchase the silence of Stormy Daniels and Karen McDougal was done for the purpose of trying to protect the campaign in the final weeks of the election and that it was done at the direction and with the full knowledge of his boss Donald Trump. It was also revealed that there was an unnamed third-party who was part of the Trump campaign who was aware of the nature and purpose of the transaction. Given the fact that we had already heard recordings made by Cohen where he discusses the McDougal transaction with Trump and both Trump and Cohen have admitted that Trump was aware of the negotiations with Daniels at the time they were taking place.  This report from NBC placing Trump in the room at the time the payoffs for both McDougal and Daniels (originally there had been plans for Daniels to be paid in a manner similar to the arrangement for McDougal, but that plan was ultimately abandoned in favor of the direct agreement that Cohen negotiated with Daniels) were discussed, and the testimony of both Cohen and American Media CEO David Pecker and Michael Cohen that the intent of the payments was to protect the campaign in the final weeks before the election,

As I said earlier this week, what all of this means is that the President of the United States was a co-conspirator with both Cohen and A.M.I. to evade and violate federal campaign finance laws, among other crimes. Were he not the President of the United States he would have most likely been indicted by now himself. Instead, we find ourselves where we are now, and where it goes from here is anyone’s guess.