Voter turnout in primary elections in 2018 was significantly above normal levels. especially in Democratic races. 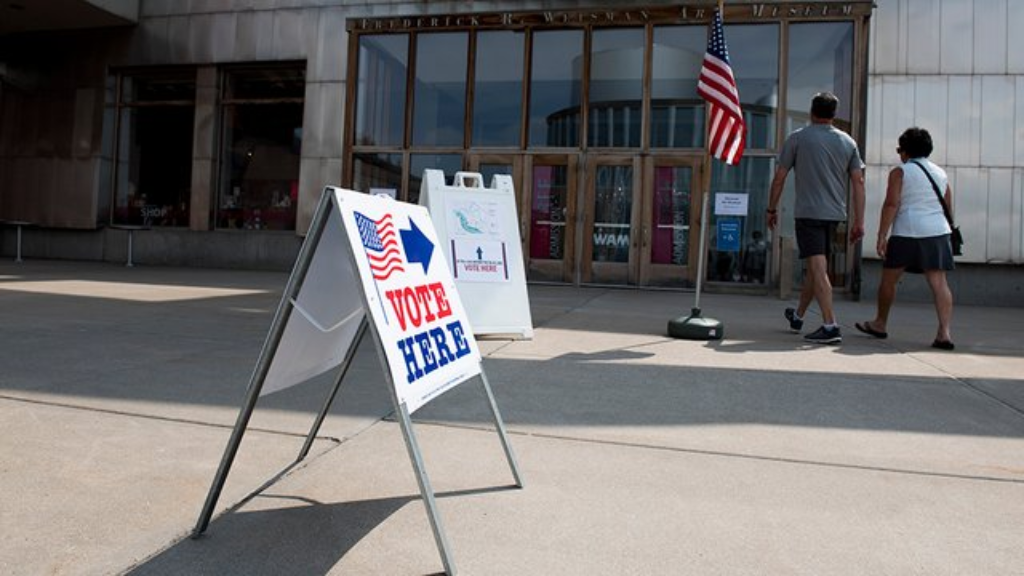 As we continue to digest the numbers from the 2018 primaries, we find that turnout was up across the board but that Democrats were far more enthusiastic voters than Republicans:

More than 40 million Americans voted in primaries this year, a staggering increase from four years ago and a sign of virtually unprecedented voter enthusiasm ahead of the midterm elections.

Primary voter turnout was higher than in 2014 for both Democrats and Republicans in most states across the country — though Democrats have a decided advantage.

Through Thursday’s vote in New York, more than 22.7 million Democrats had cast ballots in party primaries, compared with just 13.8 million in 2014.

Among Republicans, 19.3 million showed up to vote, an increase from the 15.5 million who voted in GOP primaries four years ago.

Political scientists say the higher turnout among primary electorates is a sign that voters across the spectrum are more excited to take part in the midterms than in previous years. Some said higher participation in Democratic primaries should worry Republicans, who already face a challenging midterm cycle.

“The surge in Democratic primary turnout shows that the party’s occasional voters are energized, which is an especially encouraging sign in a midterm because so many of these voters sit out anything but a presidential race,” said Thad Kousser, who heads the political science department at the University of California-San Diego.

Comparing turnout between different midterm years is imperfect at best. Six-year Senate terms mean voters in some states do not have a reason to show up to the polls in a primary, an off-year or uncompetitive governor race, where an incumbent might face only token opposition.

Democrats saw the biggest increase in turnout in Delaware, for example, where a competitive race between Sen. Tom Carper (D) and his liberal challenger drove voters to the polls this year; four years ago, Delaware Democrats renominated Sen. Christopher Coons (D), who faced no serious primary challenge.

“One reason we’re seeing higher turnout among Democrats in 2018 than in 2014 is that 2018 promises to be a good electoral environment for Democrats, so more candidates are contesting party nominations,” said Michael McDonald, a political scientist at the University of Florida. “Voters are more likely to participate in a competitive election than a noncompetitive one.”

And some states do not bother to hold primary elections for uncompetitive races. In New York on Thursday, nearly 1.5 million Democrats voted in the race for governor, almost a threefold increase over the 2014 contest. But no Republican votes were recorded, because Dutchess County Executive Marc Molinaro ran unopposed for the GOP nomination.

Correcting for those states where one side faced a primary and the other didn’t, Democrats still managed to turn out more than Republicans by a nearly 2 million-vote margin. In 2014, the situation was reversed: 2.2 million more Republicans voted in party primaries than did Democrats.

“When the primary turnout becomes anomalous, and suddenly it’s surging in one direction or another, that does tend to have some bearing on general election turnout,” said Tom Bonier, a Democratic microtargeting expert. “Democratic turnout pretty consistently surged over Republican turnout.”

Kousser said voters who show up in primaries are almost certain to show up again in November.

“Voting is habit-forming,” Kousser said. “So turning out in the spring makes these voters more likely to participate in the fall.”

Overall, turnout in Democratic primaries increased in 37 of the 47 states that held comparable contests in 2014 and 2018. Most states where turnout dropped — like Kentucky, North Carolina, Arkansas, Alaska and South Dakota — did not feature any competitive contests near the top of the ticket.

McDonald said the increase in turnout is likely to be “unusually high” in November.

Bonier, the Democratic strategist, said his party should pay attention to higher turnout among Republican voters. Unlike in 2006, when Republican voters were depressed enough to stay home, today’s GOP is more excited than it typically is for midterm elections.

“The one reason why Democrats shouldn’t be doing backflips yet, it’s not that Republicans are depressed, they’re just not surging at the level that Democrats are,” Bonier said. “They appear to be surging above levels that are typical of midterm turnout.”

This map shows the states where turnout increased most significantly for both parties: 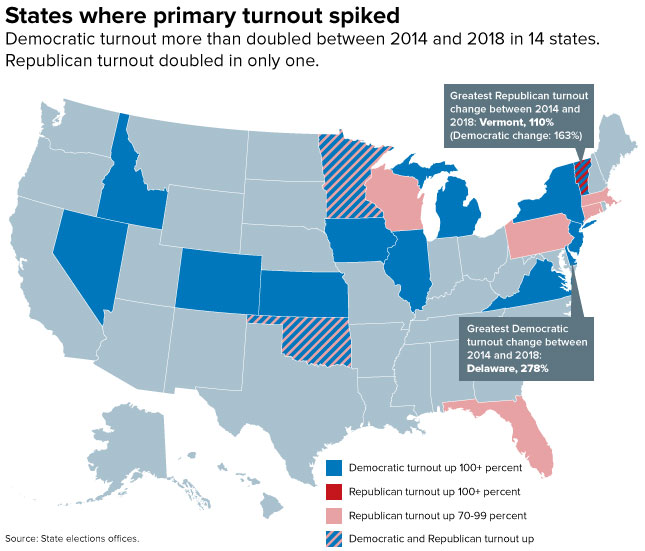 As noted above, turnout was up across the board in states that had contested races, which is generally a good sign for both parties, but the enthusiasm to vote seems to have clearly been much higher in Democratic races than it was in competitive Republican races. This suggests that Democrats are much more enthusiastic about getting to the polls in November, most likely as a means of sending a message to the President and the Republican Party about the direction of the country, the policies of this President, and the rhetoric of the President and his supporters. One significant part of this enthusiasm can be found in the success that has been enjoyed by women candidates, mostly on the Democratic side, a phenomenon that was driven both by a response to Trump and a response to the “MeToo” movement that has empowered women in entertainment, politics, and general society to speak out about past acts of sexual abuse. As I’ve noted in previous posts about the “year of the political women,” — here and here — many of these women who have won primaries likely won’t go on to win their respective elections, but their presence on the ballot is no doubt one reason that turnout was up in the primaries, and why it will likely be up in the General Election as well.

The big question, of course, is which party would be helped more by higher than usual voter turnout in this year’s midterm elections. Ordinarily, of course, midterm election year turnout is seen as being most favorable for Republicans. This is due in part to the fact that voters who would typically be driven to the polls in a Presidential election year end up staying home on midterm Election Days either because there aren’t any competitive elections in the area where they live or because they just aren’t interested or motivated. When that changes, when traditionally Democratic voters are motivated to show up on a midterm Election Day, the results can be quite significant. In that sense, this year feels similar to what we saw in 2010 when Republicans picked up 63 seats in the House of Representatives and 6 seats in the Senate. While I don’t see Democrats gaining quite that many seats in November, the status of the Generic Congressional Ballot and the fact that the President continues to have historically low job approval numbers, when combined with what looks like significant Democratic enthusiasm headed into November, certainly bodes well for Democrats in November.

Primary Turnout And The 2014 Midterms