Donald Trump is wildly unpopular in the United Kingdom, and that's apparently causing him to eschew visiting the United States's most important ally. 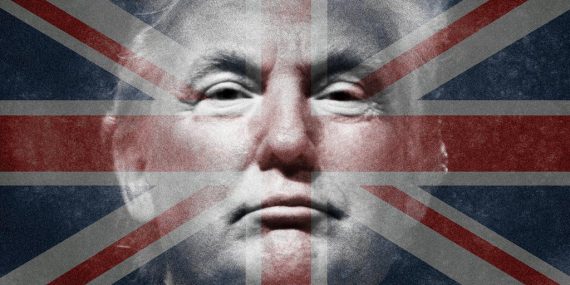 President Trump has reportedly told British Prime Minister Teresa May that he won’t visit the United Kingdom unless she can guarantee he won’t face massive protests:

Donald Trump is refusing to visit the UK unless Theresa May can ensure that he is not met with protests.

Bloomberg revealed that Trump complained in a phone call to May about the “negative coverage” he has received in the British press.

May told the US president that that was how the UK media operated and she could do little to change it.

Advisers who had been listening to the phone call are reported to have been “astonished” at the demands.

As noted, the report comes from a wider-ranging piece published before Trump and May held a bilateral meeting at the World Economic Forum in Davos, Switzerland chronicling the obviously rocky relationship between the President and the person who heads the government of what is arguably our most important ally. Suffice it to say that things have not gone well. In April, for example, when the possibility of an imminent Trump State Visit to Great Britain that would include a visit with Queen Elizabeth II was still being discussed, that Trump was reportedly demanding that he be taken for his visit with the Queen in the golden carriage occasionally used by world leaders for such purposes, although President Obama opted for the more modern option of the Presidential limousine during his State Visit. In June, it was reported that Trump was considering canceling the visit, was still in the planning stages but had not been scheduled, due to reports of plans to greet him with massive protests. By July, it was being reported that the visit was off due to fact that Trump was upset about the resoundingly bad coverage he gets from the British press on both sides of the political aisle. Most recently, it was announced that Trump had canceled a planned visit to London in May to open the new U.S. Embassy, which had been in the planning stages since George W. Bush’s Administration due to the fact that it was determined that the long-standing location of the embassy would have been prohibitively expensive to upgrade and secure in light of the new security requirements put in place after the September 11th attacks. Trump claimed at the time that he had canceled the visit because the Obama Administration had made a bad real estate deal was a bad one, but as with so many other things, it turns out that Trump’s accusation has absolutely no basis in fact.

If Trump does fail to visit the United Kingdom in the near future, would be a break from what had been a tradition for American President in the period after World War Two. With the notable exceptions of Presidents Lyndon Johnson and Gerald Ford, every President since Harry Truman has visited the United Kingdom at least once during their time in office. In most cases, the visit came within their first two years in office. For Richard Nixon and Jimmy Carter, the U.K. was either the first foreign country they visited or among the first as part of a broader European tour. (Source) If Trump does fail to visit the United Kingdom this year, he will break a precedent that has been in place since Ronald Reagan was in office. While this is not necessarily a big thing, it is a sign of how strained the relationship between the United States and one of its closest and most important allies.

Much of the opposition to Trump in the U.K. is based in no small part on his policies, but his rhetoric, particularly comments directed toward British politicians, has also played a large role. The most notable example of that came when he engaged in a what amounted to a Twitter war with London Mayor Sadiq Khan that began with Trump attacking Khan in the wake of the terror attack in Central London. This bizarre Twitter rant on Trump’s part baffled his critics and led former CIA and NSA Director Michael Hayden to call Trump “irresponsible” for attacking the Mayor in the wake of a serious terrorist attack. It wasn’t the first time that Trump had attacked Khan for reasons that only he can explain, and it generated much commentary regarding just how welcome Trump would be if he visited London anytime in the near future. Perhaps the one thing that Trump did during his first year that caused the most controversy, though, came in November when he retweeted a tweet from a far-right British organization, something that he half-heartedly apologized for during a recent interview with ITV morning show host Piers Morgan.

It seems unlikely that the British people likely aren’t very disappointed that Trump hasn’t followed through on the visit that was discussed the first time that May and Trump met early last year. Public opinion polls, for example, show that the majority of the public in the U.K. has a negative view of Trump, and it’s likely that his comments about Mayor Khan have only made that situation worse. When his planned visit was first announced, many Members of the House of Commons in both the Conservative and Labour parties spoke out against the idea of giving him honors given some of his past statements about Great Britain and his positions on issues such as immigration in general and Muslims in particular. Trump has also been heavily criticized by British politicians on all sides, including Members of Parliament from the ruling Conservative Party. Meanwhile,  it’s been made clear that the British public isn’t at all eager for a Trump visit, with some Britons planning a truly British welcome for the President should he come for a visit. If he’s trying to delay the trip because of those planned protests, then perhaps he’s the one who is the low-energy coward that he’s criticized many his opponents of being.

Despite Trump’s tantrums and the obvious antipathy toward him on the part of British, the “special relationship” between the U.S. and the U.K. is likely to remain strong for several reasons. For one thing, it’s fairly clear that both countries need each other in order to achieve their own goals even when those goals may contradict each other. In the case of the United States, Great Britain plays an important role in NATO and in world diplomacy and continues to be one of the few nations capable of assisting the United States with operations against terrorist elements in far-flung parts of the world. For Great Britain, a good relationship with the United States is crucial to maintaining its status as a leader on the world stage and that role is only likely to increase in the wake of the nation’s decision to leave the European Union. Things will likely be rocky as long as Trump is President because, well, it’s Trump, but in the long run the alliance remains secure for the foreseeable future. That being said, the antipathy that Trump generates on the other side of the pond due to his words, policies, and actions is likely to make things difficult for both parties.