New polling seems to show a significant shift toward Democrats in the upcoming midterm elections.

As of today there are just nine weeks left until the midterm elections and a new Generic Ballot poll from ABC News and The Washington Post shows the Democrats in increasingly good shape to take control of at least one chamber of Congress, a development that would have significant impact on the remainder of President Trump’s first term in office:

Two months ahead of the midterm elections, Democrats hold a clear advantage over Republicans in congressional vote support, with antipathy toward President Trump fueling Democratic enthusiasm, even among those in the party who stayed home four years ago, a new Washington Post-ABC News poll finds.

The survey also points to broad unrest and frustration with the political system generally. More than 6 in 10 Americans say Trump and the Republican Party are out of touch with most people in the country. While Democrats fare better, a narrower 51 percent majority also judged them out of touch.

Registered voters say they favor the Democratic candidate over the Republican candidate in their district by 52 percent to 38 percent. That is a marked increase from the four-point edge in an April Post-ABC poll but similar to the 12-point advantage Democrats enjoyed in January.

Because of the overall makeup of congressional districts, analysts have long said that Democrats would need a clear advantage on this “generic ballot” question, and in the national popular vote for the House, if they hope to flip the 23 seats needed to take control. The Post-ABC poll puts Democrats in a stronger position today than some other recent surveys, which showed them with an edge of about eight points on this measure.

Four years ago, when Republicans made gains in the midterm elections, the GOP enjoyed a 10-point advantage on this question in Post-ABC surveys that fall, 71 percent to 61 percent. The latest survey also asked whether people had voted in 2014, and among Democrats and Democratic-leaning independents who say they did not, 63 percent say they are absolutely certain to vote in November.

The past three midterm elections — 2006, 2010 and 2014 — produced substantial losses for the party that held the White House. In 2006, Republicans lost control of the House, but they regained it four years later. In 2014, they captured control of the Senate. Trump’s victory in 2016 gave them full control of the executive and legislative branches.

Ironically, the GOP’s weak position comes even as 58 percent of Americans say the economy is excellent or good, tying ratings from January as the most positive marks in 17 years. The fact that many Republicans are worried about whether they can hold the House during a time of positive economic assessments underscores how much Trump’s unpopularity has undermined the party’ greatest asset as fall campaigning begins.

Trump is a key factor in the asymmetry. Nearly half of voters who are upbeat about the economy still disapprove of the president’s job performance. Among this group, Democrats lead Republicans by a lopsided 74-point margin in congressional vote preferences, 83 percent to 9 percent.

When asked whether they would rather have Democrats control Congress “as a check on Trump” or a Republican-controlled Congress “to support Trump’s agenda,” 60 percent of voters say they prefer having Democrats in control. In July 2017, that figure was 52 percent, at a time when Trump’s job ratings were almost identical to today.

Meanwhile, 59 percent of voters say it is extremely or very important for them to support a candidate who shares their opinion of Trump, a figure that has grown seven points since April. Sixty-nine percent of Democrats and 65 percent of Republicans say they are seeking candidates with similar views of the president, suggesting that Trump is a motivator for both his supporters and his opponents.

The gender gap in views of Trump continues to be a key factor looking ahead to the fall campaign, with the Post-ABC poll finding 66 percent of female registered voters disapproving of Trump, including 59 percent who disapprove “strongly.” Among men, 52 percent disapprove, 45 percent strongly.

Vote preferences show a similar divide, with men basically split in support for Democratic or Republican House candidates, but women favoring Democrats by 58 percent to 33 percent, a 25-point margin. Women are also nine points more likely than men to say it’s important for congressional candidates to share their views on Trump.

All of this means that there has been a decided momentum shift in favor of Democrats over the course of the past several weeks that is also evident in the polling averages. 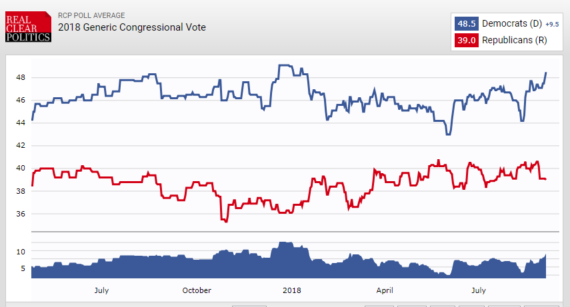 As things stand, Democrats are down by 23 seats in the House of Representatives, meaning they need to pick up at least 24 seats in order to win control of the House. Based on the numbers we are seeing right now, a normal projection would suggest that Democrats could pick up as many as 40 seats in November. Additionally, the most recent forecast from the Cook Political Report suggests Democrats could pick up between 25 and 35 seats, and that is is a projection that was made before the latest polls were made. If the Cook Report projection is correct then it means that Democrats would end up with a slim majority in the House. If the polling that has taken place in the wake of that report is accurate, then the Democratic majority would be even more substantial, as would the Republican Party’s headaches in 2019 and 2020 since it would mean that, at the very least, Democrats would use their majority to launch investigations into the Trump Administration not unlike those that Republicans launched during the Obama years.  Given these polls, and assuming that the current trend continues, my current projection would be that Democrats would be likely to gain between 35 and 45 seats in the House. Obviously, this number is subject to change depending on how the campaign goes.

As I noted above, we are now just 64 days away from Election Day. Summer is largely over for most Americans as schools across the country are starting to open, and early voting will be starting in many states as early as mid to late September. While it’s possible that there could be something that could happen between now and Election Day that could cause the factors motivating the electorate to change, and that factors in individual races could have an impact beyond those districts, we are now at the point where it’s time to pay attention to the poll numbers is upon us. It’s always been likely that Democrats are likely to pick up seats in the House of Representatives, of course, but at this point, I would argue that there is, at least, a better than 50% chance that they will gain control of that chamber of Congress at least. The only question is how big that majority might end up being.