Rick Perry isn't as radical as some on the left are saying, but that doesn't mean he's any good. 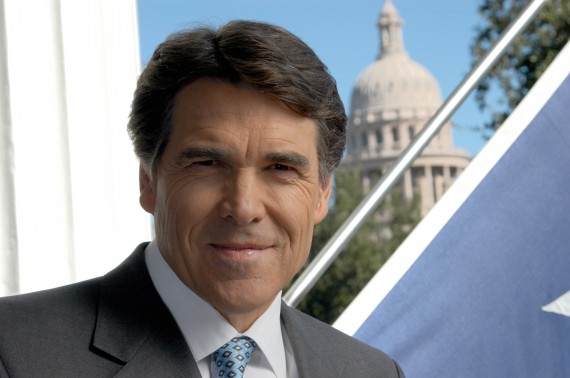 Call it part of the liberal Perry Panic that Politico writes about today, call it a coincidence. But, depending on which Washington Post columnist you read today, Rick Perry is either a radical libertarian determined to roll back the Federal Government to something resembling the way it was in the late 19th Century, or he’s a big government social conservative who wants to use the power of the Federal Government to impose his version of Christianity upon you. So, which one is true, or at least closer to the truth? Let’s take a look.

First up, there’s the Ruth Marcus column that James Joyner mentioned in his post earlier today. In her column, Marcus goes through a litany of proposals that Perry made in his book Fed Up!, most of which I wrote about last week. Basically it boils down to his call to repeal the 16th and 17th Amendment, his criticism of the New Deal, and his comments about Social Security and Medicare. After listing them, Marcus reacts with typical Washington liberal stupefaction:

Whoa! These are not mainstream Republican views — at least, not any Republican mainstream post-Goldwater and pre-Tea Party. Even Ronald Reagan, who had once criticized Social Security and Medicare, was backing away from those positions by the 1980 presidential campaign.

Marcus is pretty inaccurate on this claim alone. To pick just one of the items that Perry mentions in his book, the idea of repealing the 17th Amendment has been advocated by mainstream conservatives like George Will, former Reagan Administration Bruce Bartlett, and , [See Update below – Ed.] who is a law professor as well as being Instapundit. It’s never going to happen, of course, but suggesting that its outside the mainstream of Republican views simply isn’t true. The same thing goes for Perry’s position on Social Security and Medicare, variations on which have been advocated by conservative and libertarian public policy think tanks, and politicians, for decades. Even things like the Human Life Amendment and the Federal Marriage Amendment have been part of the conservative mileau for quite some time. The only idea that Perry brings up that I’d characterize as outside the mainstream are the proposals he makes regarding term limits for Federal judges and other legislative controls on the Judiciary. Perhaps, as James Joyner suggests, it’s just that Marcus doesn’t travel in conservative circles enough to realize that these aren’t new ideas.

So, no, Rick Perry isn’t some kind of radical libertarian. Heck I would argue, based on his record and his position on social issues, that he’s no kind of libertarian at all. Marcus’s colleague Dana Milbank agrees that Perry’s not a libertarian, instead, Milbank says, he’s a theocrat who wants to impose his religion on society:

By his own account, he is a cultural warrior, seeking to save marriage, Christmas and the Boy Scouts from liberals, gay people and moral relativism. His latest treatise, the Tea-Party-inspired “Fed Up!,” touches only briefly on matters such as abortion and gay marriage. For an eyeful of the full Perry, crack his 2008 book, “On My Honor.” While the rest of the political world was reading Cheney’s attacks on Colin Powell, I read about Perry’s attacks on gay scoutmasters.

In the book’s most talked-about passage, he likens homosexuality to alcoholism. “Even if an alcoholic is powerless over alcohol once it enters his body, he still makes a choice to drink,” Perry writes. “And, even if someone is attracted to a person of the same sex, he or she will makes a choice to engage in sexual activity with someone of the same gender.”

Perry’s politics are religious in a way not seen before in modern-day mainstream presidential candidates. “Either faith in Christ can cleanse all people of their sin, or none, but not some,” he writes. “The truth of Christ’s death, resurrection, and power over sin is absolute. . . . What we believe about it does not determine its truthfulness.”

Perry has no use for those who “want to recognize Jesus as a good teacher, but nothing more.” Of those non-Christians, Perry asks, “why call him good if he has lied about his claims of deity and misled two millennia of followers?”

On that last point, Perry essentially says he has no use for Thomas Jefferson who famously spent the better part of one year rewriting the New Testament to remove all references to Christ’s divinity or supernatural powers.

Milbank closes by pointing out the extent to whiche Perry, at least in his writing, is a culture warrior unlike any we’ve seen in a mainstream Presidential candidate before:

Though he speaks now as a small-government conservative, Perry argues in his book: “We are close to a tipping point in American society. If you believe there is right and wrong, that there are acceptable standards of behavior . . . then you have a stake in this war. If the attackers win many more victories . . . the culture war may be lost before we know it. If that happens, we will find ourselves living in a world where moral relativism reigns and individualism runs amok. Now is the time to enlist in this effort, to stand up and be counted.”

As Jacob Sullum and Marc Eisner both point out, Milbank’s use of the term “theocrat” and his evidence don’t quite add up:

The term “theocrat” suggests that Perry hopes to establish a theocracy and use the power of the state to impose God’s law. I don’t see much evidence of this in Perry. If anything—and here Marcus has it right—he seeks to embrace the core provisions of the original (and “terrifying”) constitution, thereby dramatically reducing the role of the federal government to that envisioned under Article 1.

The question then, as I noted the other day, isn’t so much what Rick Perry’s religious views are, so much as how he would apply those views to public policy, judicial selection, and the myriad of other things he could do as President. That’s a perfectly legitimate line of inquiry, but calling him a “theocrat” because he’s a fairly strict Christian is a pretty blatant misuse of the term.

Instead I’d suggest that Perry is neither a libertarian nor a theocrat. He is, in the end, a traditional big-government conservative. Evidence for this can be seen in his record as Texas Governor, which includes a history of crony capitalism disguised as economic development and, of course, the Gardisil decision. He isn’t necessarily another George W. Bush, at least not domestically, but anyone in the Tea Party who thinks he’s going to lead a revolution to cut the size and scope of the Federal Government is, most likely, kidding themselves.

Update:  A correction, and an apology to the Instapundit.