The GOP's shutdown was about as pointless as a show about waiting for a table in a Chinese restaurant. 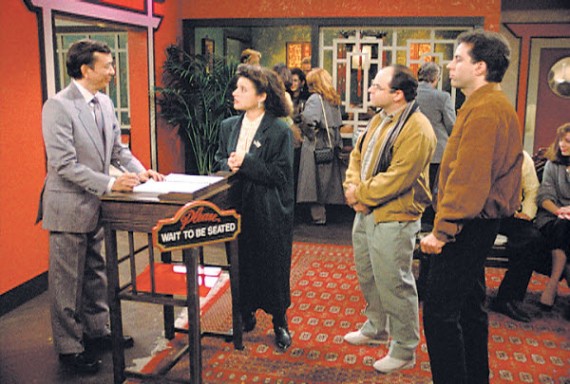 During its nine year run on television, Seinfeld was often called a “show about nothing” in that the plot of many of the show’s episodes were supposedly about completely trivial matters of every day life, such as waiting around to get a table at at Chinese Restaurant, standing in line for a movie, or someone buying socks for their employer. After the show became a success, the writers even parodied the idea by having Jerry and George pitch the idea of a “show about nothing” to NBC that eventually got made into an unsuccessful pilot. As we sit here today just hours away from Congress finally taking up the kick the can down the road bill that we all knew was coming to resolve the manufactured crisis of the shutdown and its slightly scarier spinoff of the debt ceiling, it’s quite apparent that, as The Atlantic‘s Molly Ball points out, Jerry, George, Elaine and Kramer had nothing on the Republican Party, who have put America through a shutdown showdown about nothing:

The GOP will actually get less out of the final deal being brokered than the party would have gotten had House conservatives never staged their revolt on Obamacare. In fact, the drama is likely to end with Republicans ceding policy concessions to Democrats.

Let’s review: Had the House passed the “clean” continuing resolution it was offered on September 30, the government would have remained open only until November 15, at the reduced funding levels determined by the “sequestration” cuts imposed by the 2011 debt-limit deal. Republicans still would have had the debt-ceiling deadline Thursday, plus another budget fight on the horizon a month later, as perceived points of leverage. (Democrats insist this leverage is illusory as the White House would refuse to negotiate, but to Republicans, that’s what these deadlines are: valuable bargaining chips.)

Instead, the House is poised to pass a measure that funds the government through January 15 and lifts the debt ceiling until February 7—taking the heat off Congress for months and eliminating three pressure points (the September 30 funding expiration, the October 17 debt-ceiling target, and the hypothetical November 15 funding expiration) in one go. The proposed deal negotiated by Senate leaders also would force the two houses to convene a budget committee, something Democrats have been demanding since the Senate passed a budget in March—and conservative Republicans have repeatedly blocked, for fear that any compromise negotiated between the two houses would mean selling out their principles.

A government that nobody wanted to shut down seems poised to reopen after 16 days of personal hardship, disappointed tourists and vast amounts of wasted productivity. The United States was on the brink of defaulting on its debts because of simple legislative paralysis; the best that can be said of a higher debt limit is that this won’t happen, at least for now.

Beyond that, not a single law or government policy has changed in even a small way. If you’re looking for vast changes to the new Obama health care law, keep looking and, eventually, you’ll find that if you qualify for a health care subsidy, the government will now seek to verify your income.

This episode will be remembered for many reasons: for Sen. Ted Cruz’s stamina and stagecraft; for the rise of outside groups in directing traffic inside the Capitol; for shuttered monuments and idled federal workers; for Obama’s absence from negotiations of which he rejected the premise; for the big, perhaps inevitable clash between two starkly different visions of government.

It should also be remembered as a moment that Washington managed to seal itself off almost completely from the lives of the people sent to this city to represent them.

The lights are coming back on. But there’s little worth gazing on in Washington.

Ball and Klein are, of course, absolutely correct. The epic shutdown of December 1995 through January 1996, actually led to a landmark budget agreement between the Republican Congress and President Clinton that led, in part, to several years of “balanced” budgets. This shutdown, which will be the third longest since 1976 whether it ends tonight or tomorrow morning, will result in little more than a delay of the inevitable and a promise to spend the next two months talking about yet another “Grand Bargain” that only a fool would be optimistic about. Indeed, it’s hard not to see us facing this same problem again in January or February. On the whole, though, these sixteen days of shutdown and discussion about the debt ceiling have resulted in absolutely nothing productive getting done as far as American politics is concerned, and a whole lot of wasted time for every one.

If you’re going to pick a loser from this entire debacle, though, that title would have to go to the Republicans on Capitol Hill who set this entire machinery in motion.

For the Tea Party side of the party, this started out as an effort to defund the Affordable Care Act that nobody outside of their tight circle thought could possibly succeed. Indeed, for the most of the summer Republican Leadership in both the House and the Senate was insisting that the party was not going to go along with the idea of tying that law to the the budget. It was only because of pressure from the likes of Ted Cruz, and his rather open “behind the scenes” collusion with the Tea Party caucus in the House that Boehner and Company found themselves forced to engage in a strategy that they obviously had to know was going to fail. The result of all of that? Obamacare hasn’t been defunded or delayed, the Vitter Amendment to address the largely mythical “Congressional Exemption” is not part of the deal that will be voted on tonight, and even the hugely unpopular medical device tax remains intact for the moment. One could even argue that the Cruz-ites insistence on focusing all this attention on attacking the PPACA helped the Obama Administration by helping to divert attention from a nearly two-week old rollout that has, as even people on the left like Robert Gibbs and Ezra Klein admit, rather disastrous. But for the shutdown, the debt ceiling, and the GOP’s insistence tying both of them to a doomed crusade against a law they have already tried to repeal some 50 times since January 2011, the story for the past two weeks would have been about how badly the Obamacare rollout has gone. Instead, the story is about the shutdown, GOP intransigence, and the extent to which party leaders in the House lost control over their caucus.

Of course, at the same time that the GOP got absolutely nothing from this shutdown, they also have arguably done themselves damage that could be a significant problem going forward. Poll after poll leading up to the shutdown showed that Republicans were likely to get most of the blame if we did actually go past October 1st without a Continuing Resolution, and yet the party went forward with their strategy. After the shutdown occurred, polling confirmed the predictions that had been made by the September polls, and the GOP saw its approval ratings slip to astoundingly low levels.  As if to make things worse, some early polling is suggesting that the shutdown has hurt Republican candidates in the crucial Senate races that the party needs to win next year if it is going to have any chance of winning the Senate. It’s also quite apparent that the shutdown has hurt the Republican ticket in Virginia notwithstanding the fact that Gubernatorial candidate Ken Cuccinelli tried to distance himself from Washington Republicans. So, not only did the Republicans get absolutely nothing for their two week long political stunt, as every rational political observer had predicted, they may well have caused real political harm to their party’s chances at the polls.

Finally, this shutdown has, by some accounts, revived conflicts between the Tea Party faction of the GOP and more traditional conservatives and Republicans who have largely been cowered by the populists for the past several years. For most of the summer, leadership Republicans and even rock solid conservatives like Tom Coburn, warned the Cruzites that trying to defund Obamacare by tying it to the budget was a strategy that was destined to fail. In the final days before the shutdown, there were many reports, mostly quoting anonymous Congressmen or Senators and their aides, about growing frustration with  Cruz and his allies on and off Capitol Hill. As the shutdown dragged on, though, more and more people were going on the record with their criticism, both of the strategy itself and of Cruz and his supporters personally. Now, with the crisis apparently starting to wind down, there are rumors that the battle between these two factions may well continue into the future and that many “establishment” Republicans are determined not to let the Tea Party get the upper hand in candidate selection and primary fights this time around. The prospect for both open and behind the scenes warfare in the party seems to be quite high. If it happens, it will all be because of a shutdown that never should have happened to begin with.

It was, in other words,  four weeks of completely wasted time on the part of the GOP, and all they’ve really done is harm themselves politically and, potentially, set off a political battle inside their own ranks. If that’s not a shutdown about nothing, I don’t know what is.