Another morning, and another unhinged Twitter attack on the Mueller investigation by a President who claims the entire investigation is a "hoax" and "Fake News." 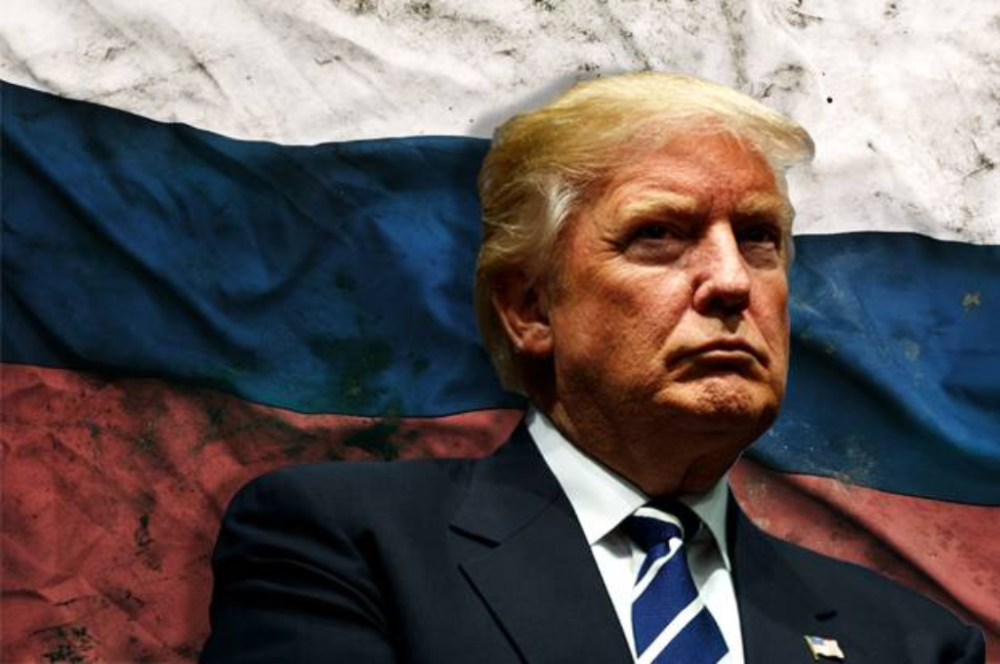 In yet another morning Tweetstorm, President Trump took his most direct attack yet on Special Counsel Robert Mueller and the Russia investigation:

WASHINGTON — President Trump called on Attorney General Jeff Sessions on Wednesday to end the special counsel investigation, an extraordinary appeal to the nation’s top law enforcement official to end an inquiry directly into the president.

The order immediately raised questions from some lawyers about whether it was an attempt to obstruct justice. The special counsel, appointed last year to oversee the government’s Russia investigation, is already looking into some of the president’s previous Twitter posts and public statements to determine whether they were intended to obstruct the inquiry into Russia’s interference in the 2016 election and any ties to the Trump campaign.

Mr. Trump’s lawyers quickly moved to contain the fallout, saying it was not an order to a member of his cabinet, but merely an opinion. An hour and a half after the tweet was posted, Mr. Trump’s lawyers contacted a reporter for The New York Times. In a subsequent telephone conversation, one of his lawyers, Rudolph W. Giuliani, dismissed the obstruction of justice concerns, calling it a “bizarre and novel theory of obstruction by tweet,” adding that it was “idiotic.”

Presidents typically do not weigh in on active Justice Department investigations, but Mr. Trump has been outspoken about his anger and frustration with the Russia inquiry. Mr. Trump has also said that he never would have made Mr. Sessions his attorney general if he had known Mr. Sessions would recuse himself from the inquiry.

Mr. Sessions recused himself in early 2017 in part to avoid the kind of conflicts Mr. Trump proposed. Later, the special counsel, Robert S. Mueller III, was appointed to carry out the inquiry.

The president’s lawyers, Jay A. Sekulow and Mr. Giuliani, said in a telephone interview that Mr. Trump was not ordering the inquiry closed but simply expressing his opinion.

“It’s not a call to action,” Mr. Giuliani said, adding that it was a sentiment that Mr. Trump and his lawyers had previously expressed publicly and that it was a statement protected by the president’s constitutional right to free speech.

“He doesn’t feel that he has to intervene in the process, nor is he intervening,” Mr. Sekulow said.

The president wanted the legal process to play out, his lawyers said. “He’s expressing his opinion, but he’s not talking of his special powers he has” as president, Mr. Giuliani said.

“What he’s saying here is that there’s no one who ought to be able to investigate his actions and, if necessary, hold him accountable for those actions,” Mr. Axelrod said.

Mr. Axelrod said this request of Mr. Sessions was part of a larger pattern — one in which Mr. Trump attacked the integrity of the special counsel, attacked the press and attacked the courts, “all institutions designed to provide checks on executive authority and executive overreach,” he said.

Mr. Trump gave the directive in a series of Twitter posts hitting familiar notes in his objections to the investigation and accusing an investigator of being “out to STOP THE ELECTION OF DONALD TRUMP.” Some of his messages contained quotations the president attributed to a staunch supporter, the lawyer Alan Dershowitz.

Mr. Mueller and his team are also looking into whether some of Mr. Trump’s tweets about Mr. Sessions and the former F.B.I. director James B. Comey were intended to obstruct the inquiry.

“FBI Agent Peter Strzok (on the Mueller team) should have recused himself on day one. He was out to STOP THE ELECTION OF DONALD TRUMP. He needed an insurance policy. Those are illegal, improper goals, trying to influence the Election. He should never, ever been allowed to……..

…..remain in the FBI while he himself was being investigated. This is a real issue. It won’t go into a Mueller Report because Mueller is going to protect these guys. Mueller has an interest in creating the illusion of objectivity around his investigation.” ALAN DERSHOWITZ….

..This is a terrible situation and Attorney General Jeff Sessions should stop this Rigged Witch Hunt right now, before it continues to stain our country any further. Bob Mueller is totally conflicted, and his 17 Angry Democrats that are doing his dirty work are a disgrace to USA!

Paul Manafort worked for Ronald Reagan, Bob Dole and many other highly prominent and respected political leaders. He worked for me for a very short time. Why didn’t government tell me that he was under investigation. These old charges have nothing to do with Collusion – a Hoax!

Russian Collusion with the Trump Campaign, one of the most successful in history, is a TOTAL HOAX. The Democrats paid for the phony and discredited Dossier which was, along with Comey, McCabe, Strzok and his lover, the lovely Lisa Page, used to begin the Witch Hunt. Disgraceful!

Looking back on history, who was treated worse, Alfonse Capone, legendary mob boss, killer and “Public Enemy Number One,” or Paul Manafort, political operative & Reagan/Dole darling, now serving solitary confinement – although convicted of nothing? Where is the Russian Collusion?

“We already have a smoking gun about a campaign getting dirt on their opponent, it was Hillary Clinton. How is it OK for Hillary Clinton to proactively seek dirt from the Russians but the Trump campaign met at the Russians request and that is bad?” Marc Thiessen, Washington Post

What some are taking as a demand directed at Sessions is, of course, largely ineffective. Since Sessions recused himself from any involvement in the Russia investigation months before Mueller was appointed, he does not have the authority under relevant Justice Department regulations to fire Mueller or to involve himself in the Russia investigation in any respect. The only person who has the authority to fire Mueller, or limit his investigation is Deputy Attorney General Rod Rosenstein who is the one who brought Mueller on board as Special Counsel in the wake of the President’s decision to fire F.B.I. Director James Comey and the President’s admission just days after that decision that he did so because of the Russia investigation. Rosenstein, however, has made it clear in public statements and in testimony before Congress that he has seen no evidence that the Special Counsel has overstepped his bounds or that the investigation has gone off the rails. Further evidence of Rosenstein’s position and support for the ongoing investigation can be seen in the fact that it has been his office rather than Mueller’s that has announced the major indictments in this case, specifically including the indictment of more than a dozen Russians back in March and the indictment of a dozen Russian intelligence officials that was handed down just days before the President’s meeting with Russian President Vladimir Putin. With both his testimony and these actions, Rosenstein has made clear that he would resist any effort by the President to pressure him to fire Mueller or otherwise bring an end to the investigation, thus leaving Trump with the politically risky option of having to fire Rosenstein in order to get to Mueller. As even several Republicans have noted in the past, any action like this would only make it seem more apparent that the President’s efforts to undermine Mueller and his investigation has some sort of sinister motive behind it.

This latest screed comes just days after The New York Times reported that Mueller and his team were looking at the President’s tweets and other public statements as part of their broader investigation into whether or not the President and those around him have engaged in an effort to obstruct justice by seeking to impede the Russia investigation either before or after Mueller was appointed as Special Counsel. As I said at the time, given the frequency with which the President has used both forms of communication to attack the investigation, it isn’t at all surprising that Mueller’s team would look into these messages if only to put other statements and actions by the President and his Administration into a context that could potentially be cited as circumstantial evidence of intent or motive in an eventual argument regarding obstruction whether that were to happen before Congress as part of an impeachment inquiry or in a court of law as part of a case being made, if not against the President directly, then perhaps against those around him who may have been involved in an effort to obstruct justice.

By themselves, the President’s tweet would most likely not be sufficient to prove obstruction of justice or any other potential charge that the Special Counsel’s office might eventually bring. Taken together with other actions that the President has taken during the eighteen months that he’s been in office, though, they could potentially be powerful corroboration of an overall corrupt intent behind actions that, by themselves, may not appear to be connected. Among these actions, of course, are the President’s decision to fire F.B.I. Director Comey, his previous discussions with Comey about taking it easy on former National Security Adviser Michael Flynn and his apparent requests that Comey publicly state that the Burea was not investigating the President himself. This is especially true when you take into consideration the many, many times in which the President has denounced the Russia investigation as a “witch hunt,” attacked Mueller and his investigators, attacked his own Attorney General, attacked the Department of Justice and the F.B.I. in what is obviously an effort to undermine the Russia investigation, and made claims about the ongoing investigation that are quite simply not true. The President’s Twitter feed is replete with numerous instances in which he was using that method of communication to promote those attacks. Today’s tweetstorm is just the latest example of that.

So, while Trump’s tweets on their own may not prove an obstruction case they can arguably be used to place certain of the President’s actions into a context that, at the very least, certainly looks like it could constitute obstruction. Indeed, at some point, one has to wonder what the President’s obvious efforts to undermine the Russia investigation are all about if they aren’t an effort to obstruct Justice. While the President is entitled to the same presumption of innocence that any other actual or potential criminal defendant is entitled to, it’s also the case that his behavior so far is not the behavior you would expect from someone who didn’t have something to hide, whether it was something about his campaign’s collusion with Russian officials to gather information on Hillary Clinton or something about his personal or business affairs. In some sense, then, it’s not dissimilar from a criminal defendant who flees from police. If you Trump has nothing to hide, then why is he acting so much like a person who has something to hide? It seems as though Robert Mueller is asking the same question, and Trump’s Twitter feed is only feeding that suspicion.