Will Ryan Be Forced Out Of The Speakership Before The Election?

Some Republicans are suggesting that Paul Ryan should be pushed out as Speaker before the November elections. 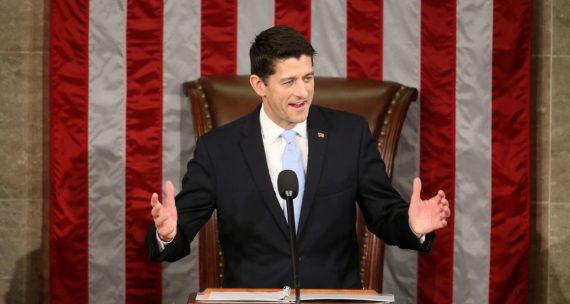 When Paul Ryan announced yesterday that he was not seeking re-election to the House seat he’s held since first being elected in 1998, he made it clear that he intended to stay on board as Speaker of the House through the end of the current term of Congress. Less than a day after his announcement, though, there are already reports that some segments of the Republican Party are calling on him to step aside sooner so that Republicans can pick new leadership heading into the 2018 midterms:

House Speaker Paul Ryan’s retirement announcement Wednesday morning set off a round of heartburn within the White House and among its allies over the damage that may be done in what’s left of his term.

And while publicly no lawmaker is yet discussing a push to get the speaker to leave early, certain quarters of the Republican Party and Capitol Hill want him out of Congress right away rather than in early 2019.

Sources inside the Trump White House tell The Daily Beast that their primary concern following Ryan’s announcement was that more fellow House Republicans would follow him to the exits, enhancing the likelihood that Democrats gain control of the chamber. That fear seemed at least partially realized when Rep. Dennis Ross (R-FL) said that he too would be retiring from Congress minutes after the Ryan news broke.

But the concerns extend beyond 1600 Pennsylvania Avenue and aren’t just about the possibility of GOP lawmaker exodus that may soon transpire. On the Hill, there is fear that a lame-duck speaker all but guarantees a legislative logjam, as no lawmaker will now feel compelled to take a tough vote at Ryan’s insistence. There is also an appetite within the Republican caucus to get new leadership in right away, with the front runners being Majority Leader Kevin McCarthy (R-CA) and Majority Whip Steve Scalise (R-LA).

What we’re hearing: One source close to leadership told us: “Scuttlebutt is that Paul will have to step down from speakership soon. Members won’t follow a lame duck, he’ll have no leverage to cut deals, and the last thing they need in this environment is 6 months of palace intrigue and everyone stabbing everyone else in the back.”

So we wouldn’t be surprised if Ryan reverses himself before August, setting an early election for the next speaker

As things stand, the battle for the Speakership, if there is one, would be between House Majority Leader Kevin McCarthy and Majority Whip Steve Scalise, what’s unclear is whether Scalise or anyone else would seek to mount a challenge to McCarthy if he chooses to throw his hat in the ring to replace Ryan. As things stand, McCarthy appears to be the favorite not only among the membership but also in the mind of perhaps the most important voice in the Republican Party, President Trump. As several people have noted over the past day, it seems likely that Trump would back McCarthy over Scalise and might even act to discourage Scalise from challenging the California Congressman if he wants the job. Part of this is due to the fact that Trump has developed a close relationship with McCarthy and has frequently turned to him for advice over the course of the past year. At the same time, though, the President also appears to have a good relationship with Scalise and all indications are that he’d likely be just as happy to see the Lousiana Congressman rise to the Speakership if that’s how things end up working out.

More than the President, though, the path to the Speakership for McCarthy, Scalise, or anyone else is going to have to run through the House Freedom Caucus. While this segment of the House Republican Caucus remains a minority within the total group, they still represent a strong enough contingent that their support would be absolutely essential for any candidate to secure the support of if they are going to get the majority vote they need to be elected Speaker of the House. No doubt, the Caucus will seek to use this fact as a means of gaining leverage and power within the Caucus and the price that they are likely to ask would likely include chairmanships (or Ranking Member if the GOP ends up the minority) of key House committees as well as leadership slots for some of the top members of the Freedom Caucus itself. Some kind of understanding in this regard will have to be cut with the Freedom Caucus regardless of whether or not there is a real battle for the Speakership or not.

On some level, I suppose it makes sense that Republicans would want to head into the elections in November with the question of who their next leader will be in the wake of Ryan. Additionally, it’s unclear how effective a leader Ryan can be over the next seven months given the fact that everyone knows he isn’t going to be Speaker next year. For those reasons, resolving the leadership question before the elections would make a certain amount of sense. At the same time, though, the outcome of a leadership race in the summer isn’t going to mean very much since there will have to be another such race in November after the election when it’s clear who will actually be in the House of Representatives in the term that begins in January 2019. Because of that, Republicans may be best advised to keep this fight on the back burner until after the election rather than engaging in a potentially divisive battle on the eve of primaries and the General Election. 1