Ben Carson threatens to leave the GOP over recent reports about plans for a brokered convention, but with his poll numbers collapsing one wonders why anyone would care if he did.

Echoing a threat that Ben Carson has made on more than one occasion, Ben Carson is now threatening to bolt the Republican Party even as he becomes less and less relevant to the 2016 race:

RNC Chairman Reince Priebus held a dinner in Washington on Monday, and, according to five people who spoke with the Post, the possibility of Trump heading into the Cleveland convention with a substantial number of delegates was a topic of discussion. Some attendees suggested the establishment lay the groundwork for a floor fight that could lead the party’s mainstream wing to unite behind an alternative. Carson rejected this approach.

“If the leaders of the Republican Party want to destroy the party, they should continue to hold meetings like the one described in the Washington Post this morning,” Carson said in a statement released by his campaign.

Carson said he prays the Post’s report is incorrect and threatened to leave the GOP. “If it is correct, every voter who is standing for change must know they are being betrayed. I won’t stand for it,” said Carson, who added that if the plot is accurate, “I assure you, Donald Trump won’t be the only one leaving the party.”

The retired neurosurgeon said that next summer’s Cleveland convention could be the last Republican National Convention if leaders try to manipulate it.

“I am prepared to lose fair and square, as I am sure is Donald,” Carson said. “But I will not sit by and watch a theft. I intend on being the nominee. If I am not, the winner will have my support. If the winner isn’t our nominee, then we have a massive problem.”

Carson told ABC News on Friday that he had no plans to run as an independent. “But I certainly don’t want to be a part of corruption,” he said, stopping short of saying he would drop out of the race if he left the Republican Party.

“I’ll leave that up to you to speculate,” he added with a smile.

Carson is referring, of course, to the reports I wrote about earlier today about Republican Party insiders discussing preparing for the possibility of a brokered convention where no candidate arrives in Cleveland with a majority of delegates required to win on the first ballot, something that has not happened in either party since 1952. As I noted, such an outcome is not nearly as likely as some political pundits would probably like it to be, but on the surface it seems entirely logical to me for party insiders to prepare for the possibility that it could happen. This is especially true given the fact that, if it did, the entire process for going to a second, third, or more ballot(s) would play out on national television under the watchful eyes of all the cable news networks, not to mention the Internet and social media. Going into the convention unprepared would be a potential disaster for the party, and waiting until April or May to see whether such an event is likely to happen. Given that, and given the fact that there’s not likely to be a brokered convention anyway, Carson’s reaction seems to be just a bit overstated.

The subtext of today’s reports, though, is that Republican Party insiders may be seeking to find a way to stop a candidate like Donald Trump from winning the nomination even if he does manage to win a majority of the delegates, or just simply walks into Cleveland in the lead in the delegate county. This kind of an convention, which harkens back to the days when party bosses chose the nominee with little input from delegates or voters, would be almost impossible to pull of in the modern era, though. For one, thing, the rules that will govern the convention provide, thanks largely to rule changes adopted in 2012, that it would be next to impossible for delegates to vote on the floor for anyone other than the candidate they are pledged to by the the results of their state’s primary or caucus. These same rules also state that only candidates who have a majority of delegates in at least eight states can even appear on the nominating ballot submitted to delegates on the floor. Furthermore, there was nothing in the report that started all this speculation that someone in the GOP may be hatching a plan to take selection of the nominee away from the voters or their purported representatives, the convention delegates. Finally, while a chaotic brokered convention would surely be problematic for the GOP, it would be even more disastrous for the party if insiders were seen as trying to actively undermine the will of the voters. Given that, Carson’s comments seem to me to be based in nothing more than paranoid speculation.

The part that makes all of this amusing, of course, is the fact that Carson’s threat to leave the party seems like, as Ed Morrissey puts it, an empty threat. While there was a time when he was considered a player in the race for the nomination, that time has clearly long past and we now seem to be close to the point where he’s likely to drop off the radar entirely. Given how November went for Carson, that disappearance is completely understandable. During that time, Carson demonstrated ignorance about the way government operates as well as the details of domestic policy issues. In addition to this, of course, he isplayed what can only be called an odd relationship with the truth, including many of the details of his personal biography.  As the pressure grew, Carson began to attacking the media even though it was clear that he was not being treated unfairly. What seems to have proved fatal to Carson, though, was foreign policy, especially in the wake of the terror attacks in Paris. Starting in the most recent Republican debate on Fox News Channel, Carson displayed utter incoherence on basic foreign policy matters, something that has even been confirmed by those brought in to advise him on the issue.  The impact of all of this can be seen in the RealClearPolitics national polling average, where Carson dropped twelve points over the course of just over a month and will likely fall into fourth place behind Trump, Cruz, and Rubio very shortly. Before long, in fact, one expects Carson will fall below double digits and fade into irrelevance given the direction he’s been going as demonstrated by the red line on the chart: 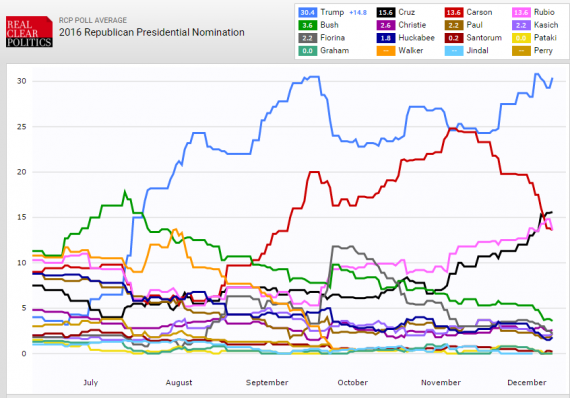 In a short while, then, a threat from Ben Carson to bolt the GOP is likely to amount to as terrifying a threat as if George Pataki threatened to leave the GOP.