A look at the Electoral College shows that It is far more likely that Hillary Clinton will win the election than that Donald Trump will. 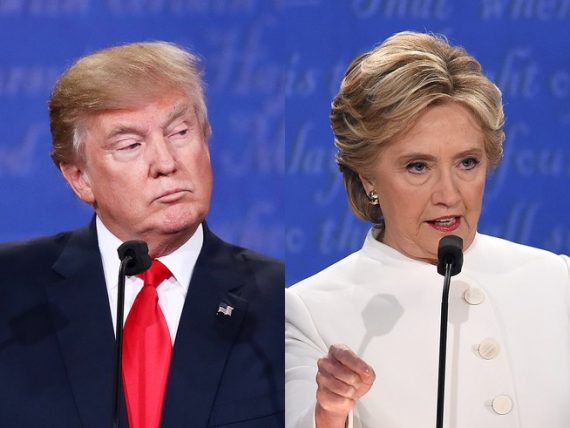 The national polls have been fluctuating all week in the wake of last Friday’s revelations about renewed F.B.I. inquiries into issues related to Hillary Clinton’s use of a private email server, as have several of the state polls. Additionally, as Steven Taylor notes his two posts this morning, there have been some wild fluctuations in the state-level polling and Electoral College projections by Nate Silver and other predictors. So, it’s worthwhile to get back to basics and take a look at what it would take for each of these candidates to get to the 270 Electoral Votes needed to win the election on Tuesday. As we shall see, things do seem to be much closer than they looked like they would be a month ago due to the fact that several states that appeared to be solidly locked for Hillary Clinton have moved into “toss-up” categories, or even appear to be slightly leaning toward Donald Trump in these final days.

First, we’ll start with what you might call the “bankable” states for each candidate, meaning the states that, based on polling and history it seems that each candidate will almost certainly win absent the unlikely event of a landslide. For example, here’s a map showing Hillary Clinton’s “bankables”: 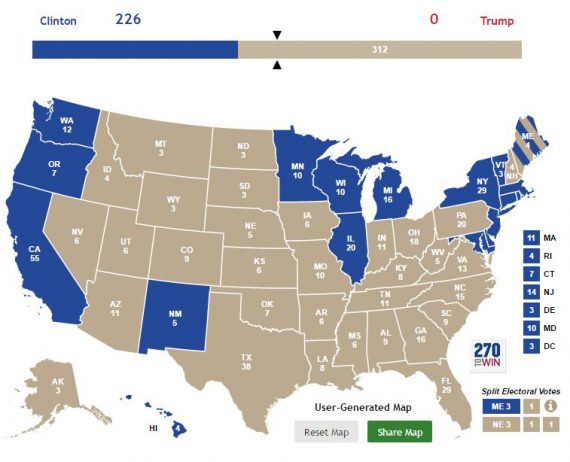 As you can see, these states include the entire Northeast with the exclusion of one Congressional District in Maine where there are some indications that Republicans might have a chance of winning a single Electoral Vote, most of the Mid-Atlantic with the exception (for now) of Pennsylvania which has been a battleground state this year which we’ll deal with below, the industrial Midwest including Minnesota, Wisconsin, Michigan, and Illinois, the entire West Coast, Hawaii, and New Mexico. This puts Clinton starting out with 226 Electoral Votes, just 44 Electoral Votes short of an Electoral College majority. It’s worth noting that the Trump campaign had threatened to campaign in states such as Wisconsin and Michigan but, so far at least, there’s little sign that Trump is at all competitive there.

Now, we’ll add in the states that can be fairly counted as Trump’s bankables: 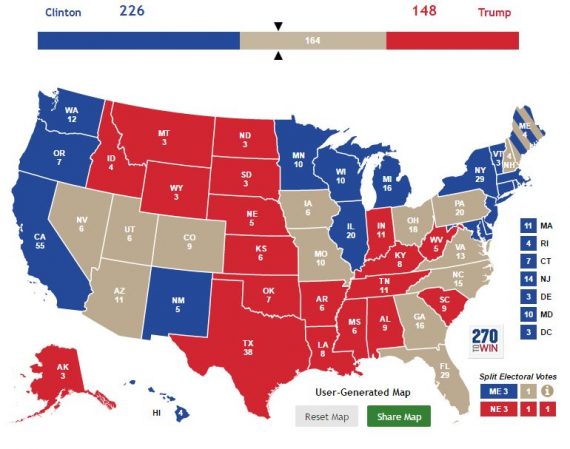 The Trump states are the ones you might suspect. The South will most assuredly go for Trump, but Virginia, Florida, North Carolina, and Georgia can’t be included in that total right now because the race there is simply too close or, in some cases, leaning toward Clinton. Additionally, Trump will most likely win the Great Plains states and the Mountain West easily, as well as Alaska. This gives Trump 148 Electoral Votes and puts him 122 Electoral Votes away from victory.To put this in perspective, this map means that Hillary Clinton needs to win 44 of the 164 remaining Electoral Votes (roughly 27 %) while Trump needs to win 122 out of those 164 votes, or just about 74%. Take note that I’ve excluded Utah from this collection of states. That’s largely because of polling there showing Trump in something of a three-way battle with Clinton and Independent candidate Evan McMullin. If Utah is included, as it normally would be, then Trump would have 154 Electoral Votes and would need 116 more (73%  of the outstanding total) to win. Suffice it to say that if either candidate ends up losing any of the states on the map above on Tuesday night, then their path to 270 would become orders of magnitude more difficult.

Now that we have the states that each candidate is most likely assured of winning, we can add in states where their current leads are such that it’s likely that they will win: 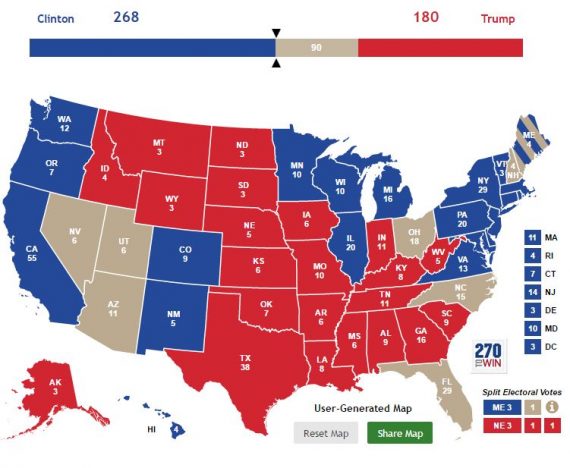 In this map, I’ve given Clinton the following states:

Trump, on the other hand, picks up these states:

This leaves us with a map that is very favorable to Clinton and quite daunting for Trump. Assuming she wins all of the states in blue, Clinton now needs to only win one other state to get to the 270 Electoral Votes needed to go over the top. It doesn’t matter which one since any one of them means winning more than the two Electoral Votes she would need to win It could be New Hampshire and its four electoral votes, Nevada and its six Electoral Votes, Florida, North Carolina, or any of the other states on the map. Also, as noted in the comments, Clinton could get to 270 from here if she won the 2nd Congressional District in Nebraska, which is basically the City of Omaha, and the outstanding Congressional District in Maine. Donald Trump, on the other hand, would need to every single one of the toss-up states remaining in the map above in order to just get to 270. The only way he could win otherwise would be if he somehow managed to win one of the Clinton states from the maps above, but that seems less likely than picking up any of the toss-ups to replace the loss of a toss-up. This is why Utah is so important for him. If Evan McMullin manages to win the state, which at least according to the polling looks like it could be possible, then that would be it for Trump. One scenario that a McMullin win in Utah would make possible, though, is this one in which Trump wins all the remaining toss-up states but loses Utah. In that case, no candidate would have a majority in the Electoral College and the election would be thrown into the House of Representatives for the first time since the Election of 1824. Such a scenario would ordinarily favor the Republican candidate, of course, but it’s unclear that Congressional Republicans would be all that eager to put Donald Trump in the Oval Office. Additionally, such a scenario is unlikely because if Trump finishes strong enough that he’s sweeping all of the toss-up states it’s likely that he will end up winning Utah even if it is by a much slimmer margin than any Republican has in recent memory.

What this all shows us, of course, is that notwithstanding the fact that we’ve seen the polls tightening on the national and state levels significantly over the past two weeks, and that Trump supporters are starting to believe that their candidate can win next Tuesday, the reality on the ground is quite different. Hillary Clinton has multiple paths to victory in the Electoral College while Donald Trump’s campaign would have to pull off a near perfect end to the campaign just to get to the narrowest of Electoral College wins. It’s certainly possible that this could happen, of course, but it doesn’t seem very probable. Whether it’s a narrow win with 272 Electoral Votes, or a massive win of more than 330 Electoral Votes, it is far more likely that Hillary Clinton will win than that Donald Trump will.