Mitt Romney Is Letting Obama’s Bain Attacks Define Him, To His Detriment

By failing to respond adequately, Mitt Romney is letting his opponent define him for the voters. That could hurt him greatly in November. 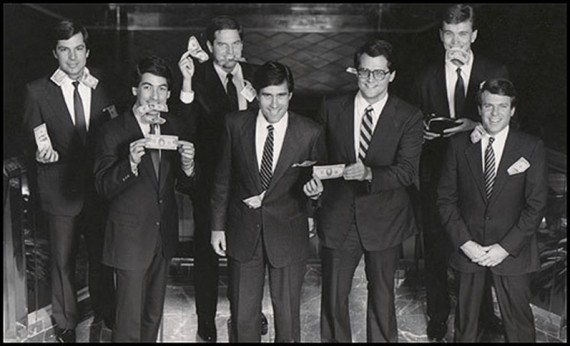 Except for the true believers, there doesn’t seem to be anyone who doesn’t agree with the idea that Mitt Romney and his campaign have terribly bungled their response to the attacks centered on his time at Bain Capital, due in no small part that they are telling a story that doesn’t seem to make sense. Because of this, the media continues to talk about the issue while the Obama campaign continues to hammer away on the outsourcing meme and the fact that Romney is refusing to release any more income tax information. All of this leads Charlie Cook to suggest that Romney is in danger of having himself defined by the Obama campaign in a negative manner that he may not be able to get away from:

The strategic decision by the Romney campaign not to define him personally—not to inoculate him from inevitable attacks—seems a perverse one. Given his campaign’s ample financial resources, the decision not to run biographical or testimonial ads, in effect to do nothing to establish him as a three-dimensional person, has left him open to the inevitable attacks for his work at Bain Capital, on outsourcing, and on his investments. It’s all rather inexplicable. Aside from a single spot aired in the spring by the pro-Romney super PAC Restore Our Future, not one personal positive ad has been aired on Romney’s behalf. The view that any day or dollar spent on talking about anything other than the economy is a waste has been taken to such an extreme that Romney has no positive definition other than that of being a rich, successful, and presumably smart businessman. People see and feel the reasons for firing Obama every day in the economic statistics and the struggle that so many Americans face daily. The Romney campaign seems focused on reinforcing a message that hardly needs reinforcing, while ignoring a clear and immediate danger to its own candidate’s electability.

The attacks on Bain, outsourcing, and his investments are sticking to Romney like Velcro, and it’s hard to see how that will change until he picks his running mate. Romney has lost control of the debate and the dialogue. Instead of voters focusing on the economy, they are now hearing about investments and accounts in Switzerland and the Cayman Islands, as well as about outsourcing and layoffs.

That Romney wasn’t better prepared for the attacks on Bain and the questions over his taxes is one of the great mysteries of this campaign. An example: In 2008, Romney turned more than 20 years of his tax returns over to the McCain team in order to be vetted for the vice presidency. So he clearly realized that tax returns could matter for political campaigns. And yet he didn’t call his accountants in 2008 and say “make my taxes simple. Now.” Why?

Kevin Drum agrees with Klein, and points out that Romney has had to deal with attacks over his record at Bain before, when he ran against Ted Kennedy in 1994 and when he ran for Governor in 2002. Additionally, I’d add that the only reason that Bain barely came up in 2008 is because Romney’s candidacy was so relatively short-lived, ending along with the entire GOP race by the beginning of February. Furthermore, there’s the fact that Romney faced a barrage on this very issue from Newt Gingrich and others for several weeks in January. Given all of that, it’s simply inexplicable that he and his campaign would be so seemingly unprepared for the attacks now, or that they would not have already had a strategy ready to define Romney in the eyes of voters before Obama’s campaign got around to doing it.

The general consensus among analysts seems to be that we’re unlikely to see major shifts in the polls because of these Bain attacks, though. As we’ve seen for months now, this election is being played out inside a very narrow playing field. The President is maintaining a job approval rating in the high-40s and he and Romney stay fairly even with each other in the national polls, for example. Additionally, the fact that the economy continues to appear to be faltering likely means that the Obama campaign won’t get a huge swing in the polls from the negative attacks on Romney simply because the American public isn’t all that thrilled with the job the President is doing. At the same time, though there are signs that the Bain attacks are taking root in the minds of voters:

In a swing-state survey from Purple Strategies released Monday, nearly 4 in 10 voters said new information they had learned in the past week made them consider Romney less favorably than they had before, and 42 percent of independents said Romney was “too out of touch” to be president. In Colorado, Virginia and Ohio, Romney’s favorability numbers have dropped from June.

According to Google, Internet searches for Bain Capital have increased exponentially within the last week, as questions about Romney’s tenure have swirled. The states showing the largest uptick in search traffic include Virginia, Ohio, Pennsylvania, Florida and North Carolina — indicating targeted advertisements by the Obama campaign and its allies are driving interest.

“You don’t have to be a political scientist to look at these numbers and see the ads are having an impact,” said Bill Burton, a former White House aide and the senior strategist for the super-PAC supporting the president’s reelection. “The Romney campaign is clearly panicked, or they wouldn’t have sent him out to do every network interview he’s doing.”

Polling on the issue reveals eerie parallels to the 2004 race, when Kerry was “Swift-Boated” on his military service — similarities that could hold a warning sign for Romney.

In the month after the 2004 Democratic convention — when commercials challenging Kerry’s military service first hit — polling from Republican strategist FMA showed that in battleground states, those who saw the commercials and changed their voting intentions broke for President George W. Bush by a 3-to-1 margin.

Similarly, a USA Today survey released earlier this month showed that swing-state voters who had seen political ads and changed their mind about the election were breaking for Obama by a 76-to-16 percent margin.

And, as with Romney, Kerry saw his favorability numbers fade, even on core issues that had previously been considered strengths, like leadership and the economy. Still, in the immediate aftermath of the Swift Boat ads, the national polls showed little tangible change, with the Gallup tracking poll showing Bush and Kerry bouncing within the margin of error.

The parallels between 2012 and 2004 are apparent, and possibly too easy to make. Romney isn’t John Kerry and Obama isn’t George W. Bush. More importantly, though, the economy is in terrible shape this year compared to 2004 when thins were in relatively decent shape. It remains to be seen if these Bain attacks will amount to anything in the polls, or if they’ll even play a role on Election Day. However, the fact that the Romney campaign has been so relatively inept in responding to them means that, if they are sticking, it’s going to be quite difficult to get around them. More importantly, though, as with Clinton/Dole in 1996 and Bush/Kerry in 2004, there is a siignificant likeability gap between the incumbent President and his challenger. As James Joyner pointed out a few weeks ago, despite the fact that they think the economy is bad shape and that the country is moving in the wrong direction, voters still seem to like Barack Obama as a person and that seems to be helping him stay afloat in the polls, especially in the swing states. Mitt Romney, on the other hand, still has a significant likability gap with the general public, not to mention a full 20% of the public who remains uncomfortable with his religious faith. If the Obama campaign succeeds in making Romney more unlikable, even by just a little bit, then that will pose significant problems for Romney in the fall.

Additionally, Mark Halperin hints that the Obama campaign may not be anywhere near done with its effort to define Mitt Romney negatively:

Pause for two beats and pay Prizzi’s Honor-style homage to the ruthless killing machine that is the combined White House-Chicago operation.

They have parceled out their opposition research in a manner both strategic and tactical, selecting specific news organizations at times of their choosing to maximize the drip-drip-drip of the twin stories. They have used left-leaning Web outfits as recipients of over-the-transom gifts as effectively (cumulatively) as the Romney campaign uses Drudge. And they have seen the Boston Globeuse its credibility to drive a ton of news.

The Obamans have dominated numerous consecutive news cycles since the last unemployment numbers came out. And there is more to come for sure. The Gang of 500 is confident it is just a matter of time before Romney relents and puts out additional years of tax returns, an eventuality that the Obama campaign will drag out for days. When some said that the Bain issue was burning out through its use by Newt Gingrich, Rick Perry, and others in the nomination fight, Chicago was quietly confident the matter could be easily revived with new information and heavy advertising — and Chicago was right. And, make no mistake, the Obamans are sitting on even more research that they will unfurl down the road.

But Romney has not collapsed in the polls by any means, and the President remains short of the magical 50% in most surveys. Maybe Romney’s foreign trip, VP selection, and convention will organically turn the page for him in time. But there are a lot of nervous Republicans outside the campaign who don’t think that’s true. And most of those nervous Republicans would be even more nervous if they knew what Chicago was still, patiently, sitting on.

That’s a sentence that is likely to make any Republican nervous. After all, there’s no reason why the Obama campaign couldn’t hold on to whatever else it might have for months, launching it as part of an opening barrage after Labor Day perhaps. By that time, it will be too late for the Romney campaign to respond effectively with the General Election campaign in high gear. At that point, the powers-that-be in Boston may come to regret their failure to address these issues, which they should have seen coming from a thousand miles away, before their opponent had the chance to start defining them.