President Obama chided the media for paying too much attention to the birther issue, but his criticism was unwarranted. 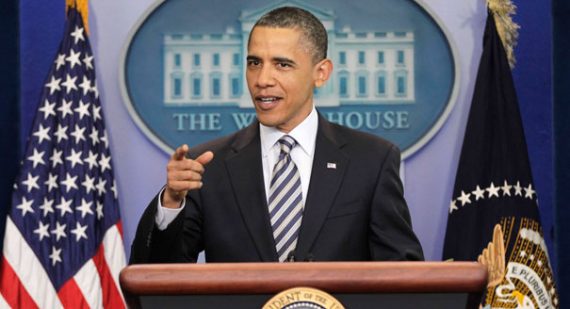 American politics took another turn on it’s trip toward utter absurdity this morning when President Obama, after having made his original “long form” birth certificate available to the world, walked into the White House Press Room and talked about his birth certificate, an issue that had been resolved three years ago. It was bizarre on many levels, not the least of them being the fact that the press conference was covered not only by all three cable networks, but by all four broadcast networks, who broke into morning programming with a “Special Report.”   All of this caused the President to address the reason why he felt it necessary to address what is, at it’s base, a conspiracy theory about as crazy as the idea that JFK was assassinated to cover up the existence of extraterrestrials:

Obama, appearing in the White House briefing room shortly after senior administration officials distributed the document to reporters, blasted the “sideshows and carnival barkers” who have pushed the birther conspiracy instead of focusing on important issues.

Obama said that “normally I would not comment on something like this.” But he said he was bothered that the bigger news stories were about his birthplace even after House Republicans released their budget and he gave his own speech about his plans for reducing the deficit.

Obama did not mention businessman and television personality Donald Trump by name, but his comment about “carnival barkers” seemed directed at the real estate developer, who has jumped to the top of presidential preference polls among GOP voters largely by raising his doubts about where Obama was born.

“I have watched with bemusement,” Obama said. “I’ve been puzzled by the degree to which this has just kept going.”

The President also remarked, half-jokingly, at how amazing it was that this issue was getting “Special Report” level attention from the broadcast networks:

Hello, everybody. Now, let me just comment, first of all, on the fact that I can’t get the networks to break in on all kinds of other discussions — (laughter.) I was just back there listening to Chuck — he was saying, it’s amazing that he’s not going to be talking about national security. I would not have the networks breaking in if I was talking about that, Chuck, and you know it.

Obama is probably right there. Tomorrow, the President is expected to announce a major shakeup of his national security team, which includes a change in command in Afghanistan. The press conference will likely be covered by the cable networks, but there’s little chance that ABC, CBS, NBC, or Fox Broadcasting will interrupt the daily programming to cover the announcement the way they did this morning.

So is Obama correct to blame the media for covering the birther issue while ignoring other stories? Not really. For one thing, it simply isn’t true that birther coverage was drowning out other issues:

According to Pew’s Project for Excellence in Journalism, that week the dominant news story was without question the economy.

The ridiculous claims about the president’s birth certificate actually was the No. 4 story for the week – receiving about one tenth of the coverage devoted to stories about the economy.

According to Pew’s PEJ: “Hardly dipping from the previous week’s level of 40%, news about the economy was the top story in all media sectors studied, from cable TV to the Internet. And the particularly high level of coverage in cable (53%) and radio (52%), two politics-heavy platforms, indicated just how politically loaded the debate about federal spending was.

“Much of the coverage consisted of analysis of the speech Wednesday by President Obama, one that based on listening to many press accounts renewed support for the President among much of his liberal base. Obama was also the dominant newsmaker in 13% of stories—double that of the previous week—a bigger share than any week since January 24-30, when Obama gave the State of the Union. (To be a dominant newsmaker, someone must be featured in at least 50% of a story.)

“The jockeying for message control between an Obama-led rally to protect entitlement programs versus a Republican attempt to privatize them underscored the key subtext of last week’s federal spending debate—the 2012 presidential election.

“The week was also marked by another sign that the media are gearing up for the campaign—rumors about Obama’s national origin resurfaced, this time from tycoon Donald Trump, a potential GOP contender for the presidential nomination. These questions made up much of the coverage that focused on the Obama administration, a topic that accounted for another 4% of the newshole.”

Of course, the White House may have felt as if the birther story was stepping on their message and, if they spent much time watching MSNBC or any of the network’s coverage of Donald Trump, it certainly might have seemed that way. Nonetheless, to say that the media was ignoring other issues to talk about the President’s birth certificate just isn’t true.

Additionally, I don’t think its fair to say that the media just should have ignored this story. For the most part, they treated it like the ridiculous claim that it was when it first came out. There would be the occasional story when Orly Taitz filed one of her ridiculous lawsuits, of course, but it wasn’t until Donald Trump started talking about the issue that the media really started paying attention to it. Even then, I doubt that the Trump thing would have lasted very long but for the fact that polling started to show Trump rising in the GOP 2012 field, and other polls showed an alarmingly large plurality of Republicans holding the belief that the President was not born in the United States. At that point, it would have been irresponsible for the media to not report on the story and, as several reporters tried to do, challenge Trump’s bizarre claims about the President.

The birther myth existed long before the media started covering and it spread without much help from CNN, MSNBC, and Fox News Channel. Blaming them for the the fact that there are a substantial number of people who hate the President enough to believe something completely nuts about him misses the point entirely.

Rick Perry: Talking About The President’s Birth Certificate Is “Fun”